What does it say that some of the most cutting cinematic commentaries on American culture of the past 30 years have arrived in the form of blood-splattered horror epics from a director who not only doesn't see the need to live or work in Hollywood, but also has shot virtually his entire body of work in his beloved hometown of Pittsburgh?

It says Hollywood is beside the point, and it does so, fittingly, with a bullet to the head. Take that, you.

When George A. Romero wrote, shot, edited, and released his now iconic black-and-white zombie opus Night of the Living Dead in 1968, he likely wasn't aware he was single-handedly creating the template for everything from regional guerrilla filmmaking (thus spawning our own Robert Rodriguez) to allegorical horror films (à la 28 Days Later), and from Fangoria magazine and its gorehound clones to the upgrading of the "special make-up effects" crew member into the "sfx artist."

That's exactly what happened, however, and in hindsight it's impossible not to see his tremendous influence not only on the horror genre but on the whole of film itself. Last spring's remake of Romero's cunningly subversive 1978 masterpiece Dawn of the Dead proved a surprise hit and paved the way for the news every monster kid worth his spilling viscera has been waiting 19 years for: Land of the Dead, the fourth of Romero's zombie films (after 1985's Day of the Dead) has been officially green-lit. To quote AC/DC, "If you want blood, you've got it."

The Chronicle spoke to Romero in the days leading up to his appearance at the Alamo Drafthouse Cinema's Roadshow of the Living Dead, which will bring the director and four of his films – Night ..., Day ..., The Crazies, and Creepshow – to Austin this Saturday evening.

Austin Chronicle: So far in your Dead films, we've been in a house, a mall, and an underground bunker. Where's Land of the Dead going to take us, and what's the story?

Night of the LIving Dead

George Romero: It's about ignoring the problem. People are starting to get back together. It's set in a walled city where people are trying to live as though nothing has changed, but here they are in this walled city, and the fat cats are in these high-rises with their own private militias, and the peons live down in the streets. They feel as if they're completely protected, but it's a lot like living with terrorism.

AC: Do you think the temper of the times has anything to do with finally getting the film in production?

GR: You know, I think it might make people more receptive to [these sorts of films], although I'm not sure how. Classically, shrinks will tell you that people want escapism in times of turmoil, but they seem also to be drawn to spooky stuff or stuff that makes you stop and think. I haven't seen it reflected too much in recent horror films. This stuff that's been coming out is so shallow, and there's very few filmmakers – or authors, for that matter – who use fantasy as a way of creating social satire. There's very little underlying it. But I've always tried to throw some of my opinions in and give my films a little depth.

Luckily, the zombie films that I do are sort of apocalyptic anyway, and so no matter what's happening in the real world, you can find something that's analogous or that looks at least metaphorical. I actually changed this script about a year and a half ago to try and reflect this sort of post-9/11 mood.

AC: How's the studio going to handle the gore situation?

GR: I'm going to have to bring in an R-rated version – it's not going to be unrated like the other ones were – but they're going to let me shoot it the way I want to, and then we'll cut it back and maybe in some cases shoot softer stuff. Today there's the video market and the market in Japan and other markets that'll take harder stuff, so hopefully the complete version will go out in markets like that and on DVD afterward. But the initial theatrical release in the U.S. is going to have to be toned down.

AC: You know we gotta ask: What did you think of the Dawn ... remake?

GR: Well, it was better than I expected it to be, but I thought it sort of lost its reason for being, the whole underlying satire, midway through. It doesn't really mean much today because when I made my film that was when those big indoor malls were new. And of course I can't stand the way their zombies moved, so that hurt me. Zombies ain't supposed to move fast. They're supposed to be dead, man.

The Alamo Drafthouse Cinema's Roadshow of the Living Dead, with George Romero live and in person, happens on Saturday, July 24, at 6pm, Pioneer Farms, 11418 Sprinkle Cut-Off Rd. For more information, call 476-1320 or check out www.drafthouse.com. 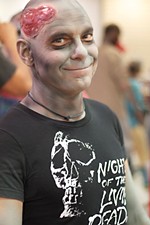 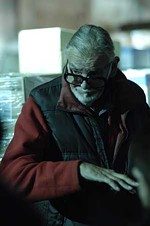 The Film Prof's Drunk, and the Kids Are Not All Right
George Romero's latest state of the union via flesh-eating legions of the undead

George Romero, Dawn of the Dead, Night of the Living Dead, Land of the Dead, Martin, The Crazies, Alamo Drafthouse