In filmmaking, it's best not to settle for the obvious target. At least that's what Paul Stekler, the award-winning documentary filmmaker based in Austin, discovered from his 20-some years looking at U.S. politics, and especially when he and his crew set out to document the 2002 Texas gubernatorial and U.S. Senate races. But the obvious target, like the weather, and most importantly, a good story, changed. The result is a riveting documentary, Last Man Standing: Politics – Texas Style, the next 2004 election-year special presented by POV (Point of View) on PBS.

"The best films are not always the most obvious," Stekler says. "There was a stronger story where we went, but a little less obvious than the 'big story.' A better story, which covered the same ground."

The "big story" was the race between Tony Sanchez, a Mexican-American Democrat and self-made millionaire from South Texas, and the Republican candidate, Rick Perry. Although the race was among state elections watched nationwide, Texans were most impressed with the profound mediocrity of each candidate. Those who didn't stay home cast their votes according to party affiliation. Still, Stekler knew there was a story.

"I was really interested in the larger story of this classic political struggle," he says, "of the Republican party George W. Bush had left behind, and the old Democrats trying to make a comeback." 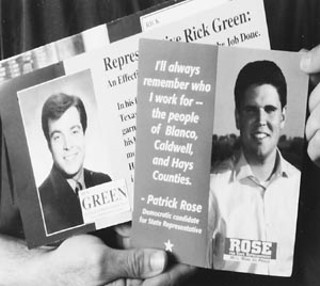 The old democratic stronghold was the one led by LBJ. A generation later, Texas is staunchly Republican. So, while keeping an eye on the "big" story, what better place to examine this struggle than in LBJ land, where, as it turns out, there was a smaller-profile race for state representative in the district that included LBJ's hometown. Rick Green, the conservative 31-year-old incumbent, found himself challenged by an ambitious 24-year-old Princeton-educated Democrat, Patrick Rose. From 200 hours of footage, it became clear that the state representative race had a stronger narrative backbone, more compelling players, and covered the same ground as the higher-profile gubernatorial and U.S. Senate races. This little race from small town Texas became Last Man Standing's big story.

Some political observers suggest that what happens in Texas politics is a microcosm of U.S. politics. Stekler doesn't quite see it that way.

What makes Last Man Standing engrossing are Rose and Green themselves. Both share a willingness to roll up their sleeves, knock on doors, make appearances at civic events, kiss babies, and shake hands with an earnest appeal for votes. It's old-school, grassroots campaigning, so iconic to U.S. politics. Where the candidates differ is in their vision, how they perceive themselves, and, finally, how they convince voters. As election day nears, it becomes a breakneck horse race that keeps viewers on the edge of their seats (even if you know the outcome of the election).

"We take real pride that our films take a strong narrative structure," Stekler says when asked about the literary sense of this film and his award-winning films George Wallace: Settin' the Woods on Fire and Vote For Me: Politics in America, among others. "Casablanca is a really well-told story. Is it about an important thing? Maybe not. Is Hoop Dreams or Crumb about a really important thing? No, but it's the story. We like to think we take a story and find the real drama, the human drama that affects our day-to-day lives. My job is to find the characters that can best tell that story."

Most importantly and perhaps unexpectedly, Last Man Standing reignites faith in the political process. If this isn't praiseworthy enough, it does so by letting viewers arrive at their own conclusions. Even if you're the most apathetic, apolitical animal, I defy you to watch Last Man Standing and not find yourself wondering how you can make a difference.

Not to be missed, Last Man Standing airs July 20 at 9pm on PBS. For more information on the film, Paul Stekler, and a chance to cast your mock vote in the Rose-Green race, go to www.pbs.org/pov/pov2004/lastmanstanding.