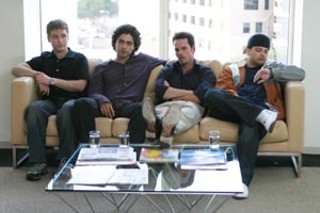 Entertainment industry trade publications have been lamenting the demise of the sitcom, with good reason: So many of them stink. Since it's more expensive to cultivate new writers with fresh ideas, network television is moving away from sitcoms in favor of, yes, more reality TV. Leave it to HBO to pour development money into comedy series. The first result of this effort is a little gem called Entourage. Thanks to HBO, and after sitting through summer sitcoms like Come to Papa and Quintuplets, I have a new appreciation for the lowly sitcom. But "sitcom" is a misnomer when describing HBO comedies. The Larry Sanders Show, Sex and the City, Curb Your Enthusiasm, and even the overly trashed Arli$$ are a few HBO comedies that have delivered laughs without condescension or relying on an overworn format.

The entourage of the title is the one that surrounds fictional movie star Vince Chase (Adrian Grenier), a fresh face on Hollywood's A-list. To "keep it real," he surrounds himself with high school pals Turtle (Jerry Ferrara) and his half-brother Drama (Kevin Dillon), who are pleased to bask in the residual glow from Vince's rising star. Eric (Kevin Connolly) is the least dazzled by the Hollywood lifestyle, a guy with a good heart and good sense, offering Vince sound career advice. When he becomes Vince's de facto manager, Vince's agent, Ari (Jeremy Piven), sees red and guns for him with a smile and piranha-like viciousness.

Unlike Method & Red, the Fox sitcom that also focuses on the lifestyles of the quickly famous, Entourage does not shoot for broad laughs, but toward the situations and behaviors that quick fame and money bring, and how nice guys can be swept into the Hollywood miasma even as they're trying to keep both feet on the ground. Ultimately, this is what saves Entourage from being too predictable. Vince and his crew are likable guys. Although Turtle and Drama lavishly enjoy the perks Vince's multimillion-dollar paydays provide, they still have their pal's best interests at heart. Drama makes Vince breakfast every day, fussing after him when he forgets he's lactose intolerant. Turtle is the most parasitic of the bunch, but a loyal and dependable one. If it all ended tomorrow, there's a strong sense that the boys would still be there. Eric is the moral center of Entourage. Although he's new to the Hollywood scene, he knows what's right and tries to steer Vince – and himself – in the right direction.

While not as brilliant as Curb Your Enthusiasm, or bitingly funny as Fox's Arrested Development, Entourage is an amusing, insider comedy that satisfies while most network comedies are forgettable before the credits roll. Entourage premieres July 18 at 9pm on HBO. New episodes air Sunday nights after Six Feet Under.

This joint venture between TNT and the BBC is a sprawling thriller trading on the real-life drama of international terrorism and the American and British agents and agencies that try to stop it. After a terrorist attack in London, all agencies leap into action – igniting institutional distrust and bureaucratic sloth.

Julianna Margulies as Maren Jackson, director of the National Security Council's Counter-Terrorism unit stateside, and Jemma Redgrave as Emily Tuthill, director of counterterrorism efforts in Britain's MI6, give particularly strong performances, as does much of the supporting cast (Bernard Hill, Piter Marek). An FBI agent played by Dylan McDermott is mainly there to invoke 9/11. Fortunately, Marek's CIA analyst Raza Michaels tempers any leanings toward breast-beating with common sense.

The Grid premieres Monday, July 19 at 8pm on TNT.

The once locally produced children's show is now available through the Great Plains Network in Lincoln, Neb. The cost of duplicating episodes from 3/4-inch tape to DVD or VHS is $25 per episode, including shipping and handling. For more information, contact Steven Lenzen at slenzen1@unl.edu. Thanks to "TV Eye" reader Elisa E. Fallows for the tip!
More TV Eye columns