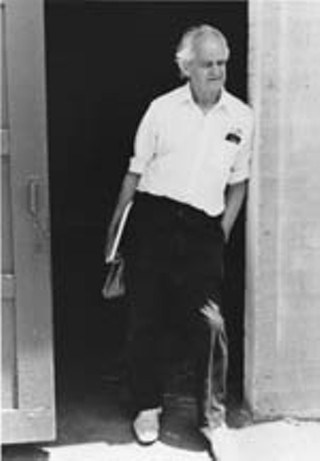 Manny Farber is the film critic's critic. Although he's not as widely known today as he should be, Farber's work has been admired by critics and writers as diverse as Susan Sontag and Pauline Kael, Greil Marcus and Jonathan Rosenbaum, William Gibson and Paul Schrader. Most of Farber's film criticism was written in the 1940s and Fifties, although that only partially explains his obscurity among younger film partisans. His compiled output of published film criticism is comparatively slight: Negative Space, a compilation of essays from The New Republic and other outlets, was published in 1971 and reissued in 1998 with a new forward and the inclusion of some newer essays written in the Seventies with his wife and collaborator Patricia Patterson.

Working as a film critic has been merely one of Farber's occupations: His byline also appears on many pieces of art criticism, and the last several decades of his life have been devoted to painting (an exhibit of which is currently on display at the AMOA Downtown in conjunction with a four-part film series, which will showcase films selected for Austin audiences by Farber that will be introduced by local film luminaries and co-sponsored by the Austin Film Society).

Whether or not they like his work, film critics will agree that Farber was the first to seriously champion the work of genre and B-movie directors like Samuel Fuller, Howard Hawks, Don Siegel, and Raoul Walsh. Because of this, Farber has often been lumped together with what, for lack of a better term, might be called a macho action aesthetic. But that reduction could not be further from the truth. What Farber appreciated about these directors was, instead, their lack of pretension and their dynamic visual styles.

The two essays that most directly outline Farber's beliefs are the two for which he will always be best remembered: "Underground Films" and "White Elephant Art vs. Termite Art." (Not least of Farber's talents is his distinctive writing style and precise word choices. Again, whether one agrees or disagrees with his arguments, the act of reading Farber's criticism remains a stimulating pleasure, as he uses sentences to build paragraphs and ideas much the same way his favorite directors combined shots and performances to create film meaning.)

As defined by Farber, "white elephant art" is that which is "reminiscent of the enameled tobacco humidors and wooden lawn ponies bought at white elephant auctions decades ago." In other words, works that tried too hard to be masterpieces and became inert in the process. "Termite art," on the other hand, has "no ambitions towards gilt culture" and "goes always forward eating its own boundaries." The aim of termite art is "buglike immersion in a small area without point or aim, and, over all, concentration on nailing down one moment without glamorizing it. But forgetting this accomplishment as soon as it has been passed; the feeling that all is expendable, that it can be chopped up and flung down in a different arrangement without ruin."

Yet it would be incorrect to think of Farber as an advocate for only the two-fisted action directors mentioned above and others of their ilk. Farber penned appreciative essays on such arthouse filmmakers as Godard and Fassbinder. His last couple of essays (written with Patterson) were on the Seventies films Taxi Driver and Chantal Akerman's Jeanne Dielman, 23 Quai de Commerce, and 1080 Bruxelles. The Austin screenings highlight films by Abbas Kiarostami and Hou Hsiao-Hsien, directors who began making movies well after Farber quit film criticism, suggesting that Farber's interest in film has not flagged over the years.

Manny Farber at the Movies

Free with AMOA admission; co-presented by AMOA and the Austin Film Society