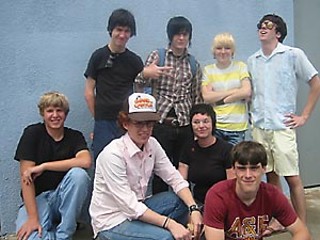 The Chronicle met with a core group of eight Center for Young Cinema kids, including Rusty Kelley, 16; Natalie Aston, 18; Charles Heidrick, 17; Carleton Ranney, 17; Eva Billingsley, 18; Ben Foster, 20; Trey Pool, 20; and Renan McFarland, 20. The most striking aspect of this group of eight – most of whom have been with the program for going on four years – is the way they interact with one another. It goes beyond their helping one another out on their various projects (including their AMN television program Oh No, which airs Sundays, 8:30pm, on Time Warner Cable Channel 15). It's in the way they tend to speak to and for each other, often simultaneously, as though they'd been hanging out and making movies together all their lives ... which, given their ages, is nearly the case.

Austin Chronicle: What is it about the CYC that produces such great work from you? Loads of kids have digicams, but the work I've seen from you is really impressive.

Rusty Kelley: What's cool about CYC is that there's a constant level of support that's coming from it. For instance, the idea of doing the TV show? It was just like, "Here's a TV show that you can make," and then the introducing of us to like-minded kids who also wanted to make a TV show. If CYC wasn't here, I don't think that any of us would know each other, and some of us wouldn't even know that we liked making films.

Eva Billingsley: We have a lot of adults behind us, too, helping us out with any idea we might have. With the TV show, we have all these people over at UT who are willing to help out with costumes, sets, and although we haven't really taken advantage of that yet, we could, and probably will, because there are so many people eager to help.

Carleton Ranney: I know this is kind of overdone, but Austin is such a big film place now, so we have lots of connections through the CYC.

RK: For me, I could care less if there's a million people filming here in Austin or not – either way we'd still be making films through the CYC. I don't even know if this is something that I'd like to do for the rest of my life, or whether or not I want to go to college and learn how to make films. I just know I like creating stuff with my friends right now.

AC: Does anyone have any plans to go to film school in the future?

Natalie Aston: I don't think I'd ever want to go to film school. This is sort of something that I always want to do on the side.

Ben Foster: Film school is like going back to basics, and we've already done a lot of that. I was at UT-Arlington last year and took an Intro to Film class, and it was like being back at the very first day of Barna Kantor's class four years ago. I think I learned more on my first day here at the CYC with Barna than I did in two weeks up there.

EB: And with the CYC you can kind of do whatever you want. There aren't a lot of rules as to what you can or can't do here; there's no one telling you, "Hey, you need to make your film different."

AC: What do your parents think about all this? Some of the films you've done, specifically Carleton's "Save Manson," I would think might run into some parental objections.

CR: When we had a screening for that my mom wanted to bring all her friends and I was, like, "Don't do that. They're gonna think I'm really weird." Obviously my parents were really supportive, though – my dad's in the movie.

AC: CYC strikes me as a DIY, punk rock film school in a way. Do you think of this as something you'll use as a springboard to future work in, say, Hollywood, or would that be considered selling out?

CR: [laughing] I just want to say, I'd sell out in a second.

NA: I definitely would.

Renan McFarland: Me too.

Charles Heidrick: I want to do film, but I definitely want money.

CR: If I can stay in Austin, that'd be great too, though.

NA: But then again, you know, selling out isn't always selling out because the only thing that keeps me from making stuff sometime is that I know I won't have enough money to do what I want to do.

CR: I think it all depends on if you think of film as art or film as entertainment. I think I'd rather entertain people, and if that means selling out, so be it.

RK: I think there can definitely be a happy medium in there somewhere. But you know, this isn't like a two-week thing – it's like forever, if you think about it. We've all been here being supported by the CYC in one way or another for, like, four years or more. And we're still here.