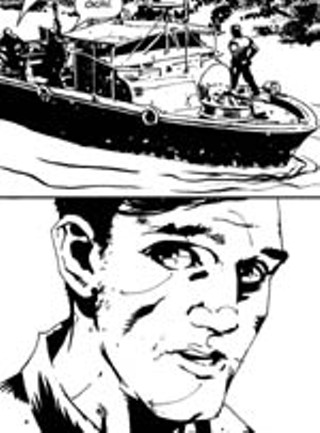 This One'll Kill Ya Dept.: It just might be the most unlikely appearance in all of comicdom: The July issue of Austinite Jason Henderson's exsanguinatorial Image Comics epic Sword of Dracula will feature a flashback sequence set in 1968 Vietnam and featuring – wait for it! – "a young swift-boat Captain bearing a striking similarity to Senator John Kerry." Whaaa? "À la Apocalypse Now," explains Henderson, one of the series' recurring characters hitches a ride down the Mekong in his pursuit of Dracula. "We don't mention Kerry explicitly by name," says Henderson, "but it's very clearly him. I was impressed with Kerry's record and the fact that he had volunteered, and so I thought that instead of having this flashback be random, I thought it would be sort of cool to get Kerry in there. I think it's probably the first time John Kerry has ever appeared in a comic book." Sword of Dracula, which, by the way, we highly recommend, is currently in development as a feature film by Die Hard producer Chuck Gordon and Adrian Askarieh, producer of the upcoming Spy Hunter, and is also being made into a video game by the fine folks over at Critical Mass Interactive. Back on the printed page, however, the burning question on everyone's mind is whether Henderson will be working President Bush into the equation, to which the Sword of Dracula creator replies, "You know what? If they want equal time, his people can just ask me to put him in there wherever he may have been during the Vietnam war." Which means we might get to see Dubya hiding in a broom closet somewhere, or more apropos to the series' ongoing themes, partying with the big D à la Col. Kurtz, as Dennis Hopper snaps away. The mind, as it is so often wont to do in these cases, reels. "All they have to do is give me the word and he's in there," adds Henderson.

In other news, Henderson and Sword of Dracula artist Greg Scott are hard at work on a new four-issue comic series titled Sylvia Faust ("Come and get your weird, weird love," urges the Web site tagline), a "romantic magic comedy" title also from Image. The kicker? It's set at the Apocalypse Drafthouse Theater, inspired by the Austin-based you-know-what, and features a character named Tim Klass, modeled on Alamo Drafthouse owner Tim League! Yet more proof that Our Fair City is the center of the universe (no matter what Stan Lee might say). "We're going from rock 'em-sock 'em vampire stuff," explains Henderson, "to a fun, sort of Bewitched kind of romantic comedy. It's fun." Jason, of that we have no doubt. For more info on either title (or movie, or video game, or, um, drive-through vegetarian restaurant franchise) head over to www.swordofdracula.com.

Good Lovin' Redux Dept.: Tickets are now on sale for the regional premiere of Richard Linklater's Before Sunset, which will be held Saturday, June 26, and will feature a bonus screening of the prequel, Before Sunrise, kicking things off at 4:30pm. Hors d'oeuvres and a cash bar will follow at Buffalo Billiards (201 E. Sixth) at 6:15pm, and then it's back over to the Paramount for the main show at 8pm, with Linklater and stars Ethan Hawke and Julie Delpy in attendance. VIP orchestra tix are $50 and are available only through the Austin Film Society offices (call 322-0145), with regular tickets currently available for $12 to AFS members and for $20 for nonmembers, beginning June 21, via the Paramount Theatre box office or Star Tickets (469-7469). More info at www.austinfilm.org.