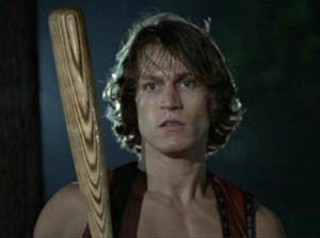 Actor Michael Beck's quietly seething turn as Coney Island gang leader Swan in Walter Hill's 1979 The Warriors might not have won any Oscars, but it did raise a red flag to an exasperated city officialdom that had been seeing the metropolis through some of its worst years ever. Twenty-five years later, Hill's gangbanging urban nightmare borders on the kitschy – those costumes! that hair! – but the film, as well as Beck's stiletto-sharp performance, has defied the odds and gone on to become a genuine classic of the genre. No less than Elvis Mitchell sang its praises on NPR in honor of the film's 20th anniversary, saying, "It really set a template for a type of action picture: spare and lean and very much in the European, almost existentialist tradition." We spoke with Beck about the film and the dangers of playing gangster in a time and place where the real McCoy could turn up at any moment (minus the baseball jerseys, of course).

There's a lot going on this weekend that people are excited about, but everyone we've spoken to has been most ecstatic about The Warriors reunion – it's almost as if the film were being released for the first time.

Michael Beck: I meet people my son's age – he's in his early 20s – who tell me that it's their favorite movie, and I think, you weren't even born when it came out, how can it be your favorite movie? But it's got a life of its own, which is kind of cool.

AC: Do you attribute that to anything special, apart from the obvious fact that it's flat-out one of the coolest films ever made?

MB: Well, I think that it's still an exciting movie both visually – because of the way Walter shot it and all the colors and images of all the surrealistic gangs – and because it's still an old-fashioned cowboy movie, basically, with the cavalry coming to the rescue in the end, and I think that genre still works. Why it's become a cult movie, though, I have no idea.

AC: It's been 25 years now since The Warriors – what are you up to these days?

MB: I'm in the middle of writing a novel, actually. I've written some screenplays, but this is my first novel. It's something I've wanted to do for 10, 15 years. I'm just really looking forward to coming back to Austin – I've been at the Alamo before, for Xanadu – and I really love what Tim and Karrie have done with the Drafthouse and how imaginative they are with the events they put on. It's just a great idea.