Has Austin or anywhere else ever seen anything like Cinemania weekend?

NOTICE: As the Chronicle was being distributed Thursday morning, Emo's and the Alamo Drafthouse announced the cancellation of their joint Memorial Day weekend festival outdoors at Two Rivers Canyon. Emo's promises to reschedule the bands for their club at a later date, while the Drafthouse's film schedule remains in tact, albeit at their theatrical locations. For a revised schedule of events, see www.drafthouse.com.

It's the kind of event you will tell your grandkids about, years from now, when you're an ancient indie-rock shell of a man (or woman), your parchment skin weathered into a road map of those three glorious days under the white-hot Texas sun, your hearing all but gone, bludgeoned into submission by wave after wave of bands, and your eyesight failing from watching too many genius films from too many genius filmmakers. Of course, you'll still have the homemade tattoo of The Warriors' Michael Beck on your ass. The rock & roll may fade away, but Swan on your butt is a bitch to burn out.

"We were the armies of the night," you'll tell your little leather-clad progeny, as they clutch battered copies of Antonio Fargas' bestselling autobiography, Hug Me Like You Mean It, Bitch, to their ratty Sebadoh T-shirts and listen to you spin the tale for the umpteenth time.

Can you dig it?

Austin has more than its share of film and music festivals, obviously, but, barring a sudden global-climate catastrophe that leaves us all flash-frozen like so many Otter Pops in Dennis Quaid's icebox, this Memorial Day weekend will see the birth of the most original that the city has ever seen. The Alamo Drafthouse and Emo's are joining forces for their Cinemania weekend, a three-day-long mega-event situated just outside of town at Two River Canyon (www.tworivercanyon.com), combining the best of each venue's strengths. From the Alamo and programmer Kier-La Janisse, we get the mighty Rolling Roadshow outdoor movie screen and a cinematic lineup that kicks off Friday night with the highly anticipated indie (there's that word again) high-school-classic-in-the-making, Napoleon Dynamite, and ends on Sunday with the 25th-anniversary reunion screening of Walter Hill's New York City gangbanger classic, The Warriors, switchblades not included. (Porta Potties, yes, but no blades, baby.)

Not to be outdone, Emo's road booker Graham Williams has assembled a raft of bands ranging from opening-night legends Sebadoh and locals Explosions in the Sky, to the orgasmic organistical outrages of Mr. Quintron and Miss Pussycat and hip-hop legend Del tha Funkee Homosapien.

In between there's the premiere of Mario Van Peebles' biopic, Badasss, and Jack Hill's blaxploitation classic Foxy Brown; Murs & Scarub of Cali hip-hop collective Living Legends; and a large body of water for people to leap into while soused to the gills on Lone Star and good, good lovin'.

But how did all this hoopla come to pass, I hear you ask?

"I have the most interest in bands of all the Alamo programmers," Janisse says over coffee and Luckies at local java joint Halcyon, "and so I tend to push for music-related stuff all the time. When I first brought the idea to Tim [League, Drafthouse co-owner] he wasn't sure he wanted to do something of that scale unless we would be able to get people involved on the music end who we absolutely knew would be capable of dealing with bands, who had a track record, and who had agent contacts galore." 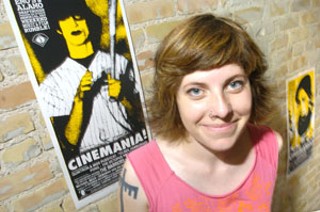 "They had a list of bands that they wanted, but, as it turned out, there happened to be a lot of other festivals going on in other parts of the country this same weekend, and so a number of bands that we were hoping to get couldn't make it or were in the studio. But for the most part we've managed to get in touch with a lot of great acts. We got really specific with it because you don't want something like this to be too punk or too mellow or too acoustic – you don't want Bright Eyes bringing everyone down right before Better Off Dead comes on, right? We just tried to keep it somewhere in the middle and keep it upbeat."

"But still have street cred," interjects Janisse. "We didn't want to program sort of geek fanboy type of stuff, because we wanted to get people who wouldn't normally come to Alamo events out to this. At the Alamo, we already have this movie fanboy audience that shows up regularly, and for this we wanted to bring in the Emo's crowd, too. For instance, Sebadoh isn't really what you'd associate with the past Alamo events, like our Camp Hack 'n' Slash, which featured Freddy Vs. Jason and the whole geeky horror cult stuff. I wanted to cross over into the Emo's zone and have those people specifically experience the Rolling Roadshow."

And the idea is sound. Two River Canyon describes itself as "an outdoor entertainment complex located in the Hill Country of Spicewood," although most Austinites know it as the location of Willie Nelson's annual picnic-cum-smokeout. With plenty of rolling, verdant hills for the inebriated to topple down and a large body of water within bussing distance (did we mention the Alamo owns its own school bus now?), the location makes for cinematic and rock & roll geek heaven, a micro-summer camp for those among us who can quote the wit and wisdom of Snake Plissken at length and can tell the difference between a Quintron and a Pussycat at a hundred yards.

"Rounding up the bands wasn't that difficult, really," says Williams. "Most bands I spoke with were really excited by The Warriors reunion specifically, although there were a couple of groups that were just like 'How much are we getting paid?' But most of the bands really seemed to get off on the idea of coming down and doing this big thing in the sense that it's more than just a show. And originally De La Soul was going to be the Saturday headliner, but they got an offer to go to Africa to headline a festival over there, and so that fell through."

"And Sebadoh was really a fluke" adds Janisse.

"Austin has Kier-La to thank for that," continues Williams. "We were stressing over a headliner for Friday and couldn't find anyone to do it that would fit the bill. Everyone we approached had fallen through. I had a number of bands waiting in the wings – Guided by Voices was a definite maybe for a while – but Kier-La heard a rumor that Sebadoh had gotten back together, and so I tracked down their booking agent, who said they'd just gotten back from something like a two-week reunion tour on the West Coast, and the one place in Texas they wanted to play was Austin, so that worked out perfectly. But again, it was a total lucky break for us. And now they're talking about getting back together permanently if all goes well after this little tour."

That a pair of Austin mainstays like the Alamo and Emo's would unite to do such good – like Superfriends with beer! – isn't in itself remarkable: The Austin film and music communities have a longstanding history of hanging out and stealing each other's metaphorical girlfriends, but the key to Cinemania might well be the sheer magnitude of the event, with an expected crowd in the thousands. And what better way to spend Memorial Day weekend than feasting on barbecue, swilling tallboys, and watching stars come out over Huggy Bear's head as the sounds of the Waxploitation DJs flip the switch in your ass to "grind," and some sexy stranger wanders over to tell you that you look pretty damn badasss in your faux-leather Warriors vest and is that a Snake Plissken in your pants or are you just happy to see me?

Once again, with feeling: Can you dig it?

"Assuming this does well and everything goes according to plan," says Williams, "next year, we'll really pick our brains and take some time in the planning. This is the first year, and it was very much a 'let's just go for it' type of thing. But as it is now, it should be unlike anything Austin has ever seen."