John Pierson will be at BookPeople on Thursday, April 29, 7pm.

"Say what you will – maybe it ain't the Seventies reborn – but the cultural impact of independent cinema has been kind of spectacular."

So says John Pierson, who, let's mince neither words nor pies here, knows what the fuck he speaks of. The longtime New York-based indie agent provocateur, producer, gadfly, and author of the seminal Spike, Mike, Slackers and Dykes was the first to vaunt Spike Lee, Kevin Smith, Michael Moore, and some guy named Linklater, among scads more of the Nineties-era cinematic revolutionaries whose low- and no-budget cinematic outbursts coalesced into something of a golden age of indie film that continues – more or less – through today.

"And I think there's also the fact that – and this is both a plus and a minus," continues Pierson via phone from Westchester, N.Y., "but also indisputable at this point is that it's been a primary supplier of new talent to Hollywood. But then again, that's something some people feared, too. But generally speaking that's been a big bonus."

John Pierson will be at BookPeople on Thursday, April 29, 7pm.

So, now Ben Affleck is considered a bonus? Color me fearful.

"Well, you've got Ang Lee doing The Hulk as well. Or Jim Fall directing The Lizzie McGuire Movie. Or, the weirdest one of all, Cheryl Dunye making My Baby's Daddy. I mean, is there any weirder Sundance-type-turned-commercial-director than that? Are there any other black, lesbian filmmakers out there lining up to do films like that?"

Pierson will be in Austin on Thursday, April 29, 7pm, at BookPeople, promoting his new, expanded edition of Spike, Mike ... retitled as Spike Mike Reloaded (Miramax, $12.95; "I managed to get Michael Moore's face on the cover, which ought to help us sell a few more"), which brings the volume up to date and also acts as somewhat of a calmative to Peter Biskind's recent history-cum-screed Down and Dirty Pictures: Miramax, Sundance, and the Rise of Independent Film. He'll also be the focus of an Austin Film Society evening consisting of indie film chat and clips from his celebrated Split Screen television show, including the infamous "Chris Walken's Cooking Show." Consider the pasta to be ... very bad indeed.

Did we mention Pierson and his family spent the past 18 months living in Fiji, where, in a grand social experiment that sounds suspiciously like an extremely clever vacation, he screened Hollywood films of all stripes for the native islanders at a 1950s theatre called the 180 Meridian? And then had Steve James document the whole thing on film, with Kevin Smith on board as producer? Honestly, the lengths some people will go to catch a showing of the Three Stooges' classic short "Some More of Samoa." 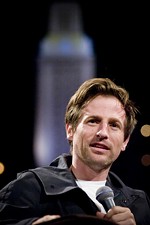