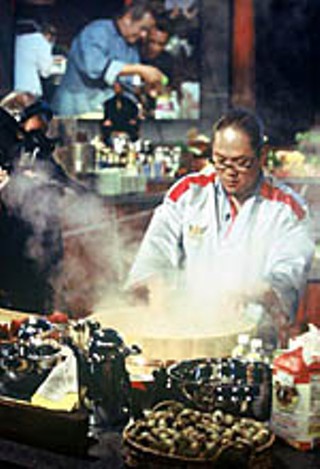 When the Food Network began carrying the Japanese import Iron Chef four years ago, they were wise to present it in all of its glory, with few attempts to break it down for a U.S. audience. The over-the-top cooking competition remains a cult classic, here and in Japan. So, altering the recipe for the show's success is inviting failure, isn't it?

A Fuji Television-produced Iron Chef: New York Battle, pitting Food Network chef Bobby Flay against Iron Chef Japanese Masaharu Morimoto two years ago was entertaining, but it wasn't the Iron Chef that cultists know and love. Still, that hasn't stopped the Food Network from continuing to dabble with the recipe. The result is Iron Chef America: Battle of the Masters, a three-episode special that will most likely serve as a barometer for launching a future series. It's superior in many ways to the New York Battle special, and, by paying homage to the Fuji Television original, it might have hit upon the right combination to create an honorable descendent.

Iron Chef fans know that there is one and only one Chairman Kaga, the flamboyant, enigmatic overseer of Kitchen Stadium, where all the cooking battles take place. Instead of mimicking Kaga, Iron Chef America introduces martial arts expert Mark Dacascos as simply the Chairman. Cultivating the homage to the original, the Chairman refers to Kaga as his uncle in a clever opening sequence that shows Kaga's signature yellow bell pepper replaced by a Red Delicious apple. Thankfully, the younger, ethnically ambiguous Dacascos takes the Iron Chef spectacle as seriously as Chairman Kaga.

On the sidelines reporting events up close is Kevin Brauch (Ohta Shinichiro in the original). Unfortunately, Brauch is appallingly weak in a crucial role. Even new foodies will blanch when Brauch is unable to identify foie gras, various root vegetables, and cooking techniques that should be elementary to him. Brown manages to cover Brauch's ineptness, but one wonders why a more capable floor commentator is not available.

Battle 4 is the grand finale, offering a new twist: Morimoto and Flay (adversaries in Iron Chef: New York) will work as teammates against Sakai and Batali on April 25 at 9pm.

From Across the Pond

A year after its critically acclaimed UK run, the six-episode miniseries State of Play premieres Sunday on BBC America. Although I intended to watch only the first episode to get a feel for the series, I found myself hopelessly addicted to this conspiracy thriller. Yes, I watched the whole thing. I know where all the bodies are buried. Don't ask if you don't want to know.

The deaths of a young drug dealer and a research assistant to a member of Parliament appear to be unfortunate, unrelated events. When MP Stephen Collins (David Morrissey) shows more than sorrow at news of his assistant's death, the press smells blood. Collins admits to an affair with his assistant and seeks advice from his friend, investigative reporter Cal McCaffrey (John Simm). It's just another naughty politician caught with his pants down story. It will fade when a new scandal appears, Cal thinks – until he discovers that the drug dealer had a phone conversation with the research assistant moments before they were each killed. What seemed like tabloid fodder turns into a complex tale that tests loyalties, threatens careers, and reveals corruption at the highest levels of government.