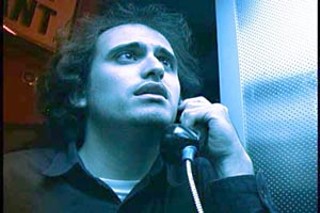 D: Miguel Coyula; with Adam Plotch, Talia Rubel, Diane Spodarek, Jeff Pucillo, Limor Shopen Armed with a Canon GL1 and little else, Cuban-born writer-director (and editor-producer) Coyula shot this science-fiction feature largely on the sly in New York City and surrounding environs. It's got its problems, but a lack of invention isn't one of them. Coyula has a comic-artist's eye for expressionistic visual language, and he saturates his begged, borrowed, and stolen locations with intense colors that create a convincing atmosphere of post-apocalyptic (and personal) doom. The result is a purposefully synthetic environment reminiscent of latter-day Hitchcock: obvious process shots, mirror shots, double exposures, a bleep-bleep Casiotone score (performed by the filmmaker himself), stilted acting, and situations that feel contrived, as if to suggest the difficulty of organic interpersonal communication. Some of it works, and some of it doesn't. The budget isn't always to blame. The tension of a family reunion at a house upstate, for example, is underscored by rear projection (good) and the howling of canned wolves in the sound mix (bad). Add in the deliberately obscure plot (what exactly is DNA 21, a high tech corporation with a shadowy role in the futuristic events at hand – acid rain and mutant life forms?), and you have a film that is at times hard to watch; one that enjoys frustrating your expectations. Viewers who are sympathetic to the avant-garde, however, will likely take pleasure in Coyula's cinematic taunting. He's a bit like the love child of John Carpenter and Mark Rappaport, if such a thing were possible. Certainly Red Cockroaches is worth a look for its bravura, which should endear the movie most of all to prospective filmmakers with maxed-out credit cards and heads full of dreams. – M.I.