Out of Print and Onto Film 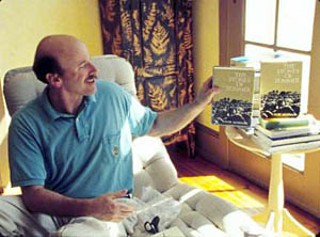 An unread copy of The Stones of Summer, Dow Mossman's 1972 debut coming-of-age novel, sat on book lover Mark Moskowitz's bookshelf for 16 years. When Moskowitz finally got around to reading the book, he loved it and went looking for other Mossman books only to hit a wall: There were none. Deciding to take a much-needed break from the commercial and political production work he'd been doing for too long, Moskowitz set off with a camera crew to find Mossman and ask him directly why he stopped writing after having written such a terrific first book (favorably reviewed by The New York Times, to boot). Finding Mossman turns out to be tougher than expected: It takes Moskowitz a year and a half of zigzagging across the country, chasing down rabbit trails but logging, at the same time, a series of remarkable conversations with well-known literary critics, publishers, editors, and writers about books, the writing life, and the phenomenon of the writer who writes one great book and stops. Finally, he locates Mossman in Cedar Rapids, Iowa. See the film to find out what Mossman's been up to for lo these many years.

Stone Reader (2002), at 128 minutes, is a rough-hewn, evocative, almost novelistic ramble of a documentary with far more on-camera detours, extraneous details, and elegiac cutaways than its simple story might seem to require. It's a leisurely first-person essay with the feel of a Ross McElwee personal journey film, though Moskowitz quickly waves away that comparison. "McElwee is a much more metaphorical and inward storyteller than I am," he says. "My movie is a very traditional linear narrative." And, Moskowitz insists, no matter what anyone might say, the film is not primarily about reading and the power of books -- or even writing -- but about life choices: Mossman's, other writers', Moskowitz's. Nonetheless, when a two-hour doc that devotes this much screen time to talk of the ineluctable love of books sweeps Slamdance, gets released theatrically, and is received with cultlike fervor at venues from Manhattan to Albuquerque, it's clear that we're dealing with something bigger than just a charming storyline.

Austin Chronicle: The enthusiastic reaction of both critics and the viewing public to your film seems to indicate that something about the movie has really touched a nerve. What do you think people are responding to in the film?

Mark Moskowitz: The film is about the audience – the reader – it's not a film about writers; it's about readers, us. The title came from my wife, Clare. People will ask me why the film never talks about the book, and I'll say, you really think the film's about the book? The film's about books, not about the book. Just like it's not about finding Dow Mossman. It's about the choices we make, the choice Dow makes to stop writing, the choice I make in middle age to stop working and take a parallel course to what he did. The subordinate theme is about how books connect us, how intimate reading is, but that's not what the movie's about. When I made the movie, I was very conscious of that, but in a very inexpressible way. When I watch the movie now, I see this – and that's why I think audiences have responded so passionately to the movie, and in such an emotional way. I didn't know that that was what it was about when it first went out, but when people started seeing it two and three times and taking their mothers and daughters and other relatives and other people they had shared experiences with, I began to see it. It's about the search, it's about the quest; all quest books are about choices. I never thought the film was about reading, the way people have made it out. When people saw the film as a polemic for reading or as an homage to reading, I was surprised. I didn't make the film for that reason at all.

AC: The film's aftermath, besides its instant popularity, is quite amazing in its own right. Tell us about what's gone on since the film's theatrical release in February 2003.

MM: I was totally naive about the whole process. Before the film was finished, I approached book publishers hoping they'd provide finish money to finish the film and at the same time could make a deal with Dow to republish the book. They weren't interested. So I decided to start what we called the Lost Books Club, so we could put the book back into print – this was way before the film was finished. After a year, I still couldn't pull it off; nothing was working. At that point, a friend suggested we put the film out in a film festival. After Slamdance and the movie's theatrical release in 2003, a lot of people wrote about the movie, including Janet Maslin at The New York Times. We had unbelievable reactions: One viewer saw the movie at the Tribeca Film Festival in 2002 several times, xeroxed the book and ran around to publishers showing it to them. And when the movie opened in New York, he saw the movie every day for the first three days. At this point, there was a little bit of interest from publishers, but it was ludicrous, they didn't care about Dow, they didn't care about the movie, they just wanted to get something in print, sell 10,000 copies in two weeks and get out or whatever. Completely mercenary. When the film opened in New York to good reviews, we had calls from every major publisher, but still, the advances offered were ludicrous and none of the publishing people had seen the movie, or read the book, with two exceptions, one of whom happened to be Steve Riggio, the CEO of Barnes & Noble, who saw the movie and bought a copy of the book for himself on eBay for $1,775 bucks. He read the book and decided to make a big push of the book, republishing it and promoting it in-store with posters, and selling a DVD along with the book. This campaign was even mentioned in the company's annual report. Now, I have the humorous experience of getting e-mails from people who've read the book and then discovered the film when they went looking for other books by Mossman.

AC: And how does Mossman spend his time with his new post-film celebrity?

MM: He's taking care of his mother, and he's semiretired; he's reading and writing some. He has much more self-esteem. He goes to book signings and film festivals and is being invited to teach classes. The film played in Boston for 10 weeks, in New York for eight weeks, Albuquerque for six weeks, and they brought it back when the book came out. People drive 10 hours to attend a signing by Dow. Dow doesn't fly, he has no voice mail – he's from '72 – no credit card, no nothing, no e-mail, no computer. When you call him, the phone just rings. He writes in longhand, though he had learned to use the computer at the library. Zoetrope threw a party for him in San Francisco, and the only way he could get there was to fly. He sat on the plane on the runway for 15 minutes, and then he just had to get off the plane, so he didn't get there. He has flown once or twice, but mostly he's driving from Iowa everywhere. It's amazing to hear this blue-collar guy talk. I heard him talk for two hours to Stanley Crouch in a bar – it was amazing.

He's very gracious about the whole thing, about something that he says he cares not a whole lot about, because, after all, he was a different guy back when he wrote the book; it's hard for him to understand the fuss. He says he'll write another book in the next 10 years. He's totally uninfluenced by the commercial side of the publishing business.

Stone Reader screens as part of the Texas Documentary Tour on Wednesday, April 14, 7pm, at the Alamo Drafthouse Village (2700 W. Anderson). Mark Moskowitz will conduct a Q&A after the screening. Tickets are $4.50 for current Austin Film Society members and new members joining before the screening, as well as students, and $6 for nonmembers. They are available only through the Austin Film Society (322-0145) by phone or at the venue one hour prior to screening. For more information, check www.austinfilm.org.