On Tuesday, GameRiot, the world's biggest video game festival, brought its sexy arcade to La Zona Rosa on its Spring tour, complete with a smoke machine, buxom blondes, and a cheeky British emcee 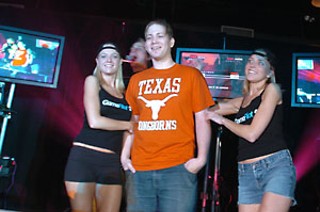 Long gone are the days of skipping school, Centipede, and mall arcades. Today, guys like Tim Ceron (above) usually score at home, Xbox-style. But even the modern hardcore gamer is a social animal at heart. On Tuesday, GameRiot, the world’s biggest video game festival, brought its sexy arcade to La Zona Rosa on its spring tour, complete with a smoke machine, buxom blondes, and a cheeky British emcee. Several new titles were available for play, including Electronic Arts’ Battlefield Vietnam and Epic Games’ Unreal Tournament 2004. Sponsored by Spike TV, GameRiot awarded Ceron, victor of the evening’s Tony Hawk Underground competition, software and a gentle flanking by the GameRiot girls, whose combat boots distracted few as they mingled among the 30 high-end Alien Ware PCs and multiple Xboxes set up about the venue. The event, which toured with Lollapalooza last summer, was a LAN sausage fest with lackluster attendance. (I counted just five females besides the ones paid to look purdy.) Sure, the bar didn’t serve much booze, but it’s the thought that counts. GameRiot is a savvy concept. Games deserve play spaces as hip as their Trent Reznor soundtracks, and they don’t have to be played solely by myopic boys in suburban lairs, either. Trouble is, lairs are just so comfy.