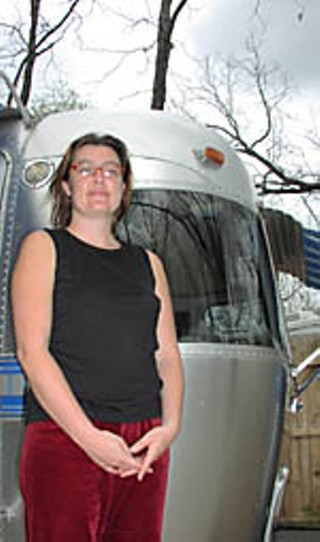 Even with film theory's politicization of the gap between viewer and subject in the 1960s, cinema remains a spectator sport. Yet when watching such televised massacres as the war in the Balkans and the Rwandan genocide in 1994, what responsibility does the audience have as witnesses? Or, in the words of my boss, are these real-life events "so confusing and terrible you can't really begin to understand them"?

Perhaps the responsibility for further engagement lies on both sides of the camera. This is the raison d'être of Sera Bonds' March 28 film benefit for her Austin-based organization, Circle of Health International. "I want the benefit to end on a provocative note," Bonds said in a recent interview outside her home in South Austin. "But I want people to know that they have to start somewhere in dealing with situations like the Rwanda genocide."

In addition to featuring Mandy Jacobson and Karmen Jelincic's documentary Calling the Ghosts, about the lives of Bosnian rape victims, the benefit will bring journalist and filmmaker Sharon Dennis for a Q&A on her The Children of Sonrise, which documents the lives of 450 children at the Sonrise Orphanage in Rwanda. "People need to see that these are not hopeless situations," Bonds says. "Women not only survive in these documentaries, but in the case of Calling the Ghosts, two women mobilize other rape survivors, eventually expanding the UN's International Tribunal at the Hague to include rape as a war crime. I hope people get out of here and write a check."

A trained midwife, Bonds turned down a six-figure job in Afghanistan to move to Austin and found COHI, an organization devoted to empowering women in conflict-affected areas, this past January. "I needed time to recharge," says the 29-year-old Bonds. "I had gone from havens like Portland and Berkeley to being the director of a feminist organization in conservative rural Montana and then to the masters in public health program at Boston University. I was tired of defending to people why I was doing what I was doing. Here, the question isn't 'Have you considered X, Y, and Z?' so much as 'How can I help?'"

The benefit spearheads two months of nationwide fundraisers for COHI's pilot project this May in Tibet. Bonds hopes to conduct four months of training for Tibetan midwives, since Tibetan women, she says, do not have ready access to health services as members of a traditionally nomadic people.

Sera Bonds: I remember a woman coming into this Indian hospital I worked at with a leg hanging out of her vagina. She had been in labor for three days. I had to stay calm, take her stats. Inside I was saying, "Oh my God, there's a woman with a baby hanging out of her." I was catching babies after three weeks of working there, which would never happen in the States.

Austin Chronicle: So what made you want to go for public health rather than midwifery?

SB: Well, initially I thought that public health was mostly about immunizations and WIC [nutrition for women, infants, and children] – not stuff that moved me. Then I read War and Public Health and realized, "Oh, the government subsidizes services directed toward women," which is who I want to work with.

AC: And your own organization?

SB: People were like, "If you work for us for six months, you'll have enough money to work for six years." But such a small amount of resources are available to people in conflicted areas; it should go to people who can't leave. We – I – get to leave. The cash shouldn't go to us.

The benefit for Circle of Health International will take place on March 28, 4pm, at the Alamo Drafthouse Downtown (406 Colorado, 476-1320). Calling the Ghosts and The Children of Sonrise will be featured. Suggested donation is $10-20.