In Blind Horizon, a man (Kilmer) awakens in a dusty border town with a gunshot to the head, a blank slate where his memory used to be, and a terrible premonition that the president's life is in danger. Once again, amnesia, that most convenient of Hollywood disorders, turns a straightforward political thriller into a Usual Suspects-style guessing game. Whether it works for you depends entirely on how patiently you're willing to wait for the big moment when all of those loud, seemingly random visions fall into place to reveal the movie's so-called "twist." At best, Blind Horizon plays like a stale cross between The Mexican and The Manchurian Candidate, although this seen-it-all-before setup valiantly tries to examine what responsibility means to a man who remembers nothing. To cop a line from a far superior SXSW-screened film, Before Sunset, "memory's a wonderful thing if you don't have to deal with the past." 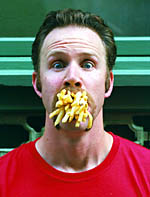