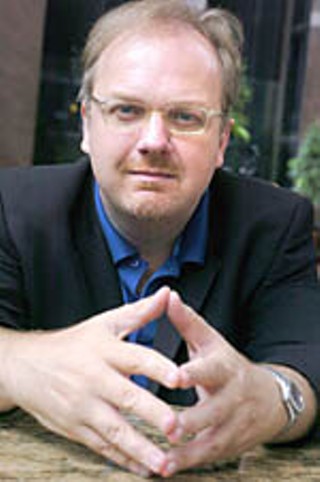 One of the most anticipated films at SXSW Film 04 – and the second-highest-selling documentary ever after the distributor First Look bought it for $1.3 million – almost didn't get made. By George Hickenlooper (Hearts of Darkness, The Man From Elysian Fields), at least. After meeting Rodney Bingenheimer, the legendary gnomic royal of KROQ in Los Angeles and starmaker/starfucker extraordinaire, at the Rock & Roll Denny's, Hickenlooper was taken aback by the fading deejay's lacking presence. "I thought it would be like pulling teeth to try and do it," the filmmaker said on Saturday at the Omni Hotel. "Plus, I'm not a huge pop aficionado, and that's what this was going to be all about. I was really on the fence." Former Dramarama member Chris Carter, then Bingenheimer's station producer and friend, had approached Hickenlooper about doing the film after his own efforts – "a couple of hours of footage on his home video camera" – abated. Hickenlooper, of course, eventually signed on, and in doing so made a vibrant, incisive, surprising film – with one hell of a soundtrack and a host of iconic drop-ins – "about a guy that most viewers might say is mournful, or pathetic, or just kind of sad. But one of the things I like about the film is that it's really just honest and truthful. It's bullshit for you or me to say that we're much different from Rodney."

So, after Denny's, Chris said to just come back to [Bingenheimer's] apartment, so we went back to his tiny apartment, and he had, floor to ceiling, walls covered with Zelig-like photographs of himself with all these incredible movie stars and pop stars, and weird combinations of celebrities like Johnny Rotten and Bill Clinton. It was bizarre. What fascinated me was that Rodney would become luminous when he discussed these photographs. He physically almost transformed. He went from this guy who wouldn't say a word to "And this is me with ...!"

Austin Chronicle: And that's what ultimately convinced you to do it?

GH: Well, in a way, without being ostentatious, I saw Rodney kind of as a metaphor for where our culture's gone in the last 30 years. Our celebrity-obsessed culture. The breakdown of the nuclear family, the rising divorce rate: All of that stuff has contributed to our obsession with the media, with pop culture. But on a visceral level, I saw Rodney as an example. ... I saw a larger theme that celebrity is sort of an extension of the human need to be loved. The phenomenon of creating famous people, people wanting to be a famous person, is sort of an extension. I saw a universal story in that. Anthony [Marinelli, the classically trained pianist who has worked with Hickenlooper and other filmmakers in the past and who composed Mayor's score] grew up with a lot of famous people. Are you impressed with them, Anthony?

Anthony Marinelli: No, not at all.

GH: [laughs] You weren't impressed by Michael Jackson when you worked with him?

AM: I was impressed by Charlie Chaplin when I met him.

Mayor of the Sunset Strip screens as part of the 24 Beats Per Second program at the Paramount, March 18, 6:30pm (the regional premiere). Its scheduled wide release is April 30.