Something More Than Just Cerebral

An interview with Charlie Kaufman

Tweet
print
write a letter
"I just had two – I don't know why I'm telling you this, it just happened – I just had two interviews in a row with people. I took a shirt, you know, from the cleaners this morning, and I just now, as I was dialing, realized there's a big piece of cardboard under the collar of the shirt. I didn't even know that, and I'm just wondering if everybody was just kinda laughing at me."

It's doubtful that everybody was laughing at Charlie Kaufman – the closest thing to a celebrity screenwriter that contemporary cinema's got – but Kaufman's laughing, at least. His laugh – perilously close to a giggle, actually – immediately calms fears that, as an interview subject, he'll be as famously difficult as the onscreen version of himself that Nicolas Cage played in 2002's Kaufman-scripted Adaptation. But this is a different Kaufman, and the film he's promoting, Eternal Sunshine of the Spotless Mind, marks a different kind of picture for the writer.

Jim Carrey and Kate Winslet star as Eternal Sunshine's Joel and Clementine, a pair of warring lovers that decide, post breakup, to erase each other from their memories. The breakup essentially starts the film, and as their memories are erased, we watch their relationship unfold backward. The film boasts the same kind of dizzying structural acrobatics and undeniable oddballness that we've come to expect from Kaufman (his other writing credits include Being John Malkovich and Human Nature, his first collaboration with Eternal Sunshine director Michel Gondry). But Eternal Sunshine is his first film not to be swallowed whole by its cerebral concept. Sure, it's a wild ride, but throughout there's a startling tenderness and melancholy that prompted one reviewer to call it Kaufman's most "humane" picture to date.

During the writing of the script, Kaufman constantly battled to make the hook – the memory-erasing premise – something more than a hook: "If you have to complicate the structure, [you have to be careful] that it comes about in a way that's organic to the movie. That the complicated structure serves the movie, isn't a window dressing thing."

The structure provides a handy metaphor for humans' habitualness, their perverse tendency to form patterns, willing and unwitting, that can't be broken.

Which could be a good thing or a bad thing – the film refuses to make a judgment call. The ending is so steeped in ambiguity that, in a post-screening discussion, one viewer walked away from the film feeling hopeless, the other saying it made her want to fall in love again.

"That's the nicest thing I could hear. That's exactly what we were hoping for. And maybe at different times those people could have the opposite reaction," Kaufman says. "That's what I want in my scripts. I want people to be able to have different experiences."

As for Kaufman, it's far more difficult to articulate his reaction to the film.

"The problem is, when you're working on a movie for so long, it's hard to know what you feel about it. You have zero objectivity about it. And this is kind of a sad thing: I can never watch this movie as I could watch a movie that I didn't make. I can never see it. I don't know what this movie looks like. And I will probably never know. Because I know everything that was cut out, everything that was written, I'm remembering this argument that I had with Michel that caused this scene to be this way, or whatever. And it's funny to think that something you're so intimately involved with is also something you can never see."

Eternal Sunshine of the Spotless Mind opens in Austin on Friday, March 19. See Film listings for showtimes and review. 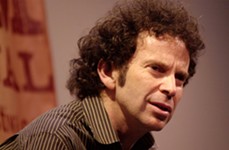 Are You There, World?
Watching Charlie Kaufman try to work it all out