Alamo on Its Way South 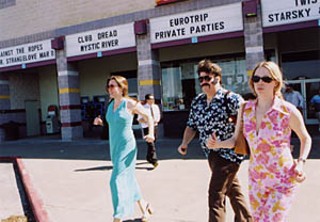 It's been almost eight years since Tim and Karrie League arrived in Austin with a passionate love of film and a crazy dream about building a theatre in downtown Austin that would not only screen the best and occasionally, well, the worst of cinematic works that in most cities reside on the hazy outskirts of town, at the drive-ins, the grind houses (though precious few remain), and anywhere a group of people would gather together with a mania for the movies of men with names like Fulci, Pasolini, Argento, Fuller, and Waters.

There were films, and there was food, and, God bless 'em, there was beer. And it was good.

Since officially opening the Alamo Drafthouse Downtown on May 25, 1997 (although it served as a venue for SXSW even before that), the Leagues have seen their filmstock fantasy grow beyond even their wildest dreams. These days, there's talk of taking the whole thing national – hell, international, even – but in the past few months there have been rumors of relocation for that original, hallowed downtown location at 409 Colorado, and now the news is out.

The Alamo Drafthouse Downtown is moving to South Austin. More specifically, they're moving into a 25,000-square-foot building in Lamar Plaza, formerly the City Market grocery store, at 1120 S. Lamar. According to the Alamo's director of promotions, Henri Mazza, the new theatre will have six full-sized screens and sport the latest in cutting-edge DTS digital audio and everything the faithful will expect from the most innovative and unique theatre chain in the country. Construction has barely begun, and Mazza says it will likely be seven months before the new venue is ready to open, which gives you, me, and all the rest of the die-hard Alamo regulars – and there must be thousands of them, all told – plenty of time to bask a few last times in the peculiarly soothing ambience of that dark, cozy theatre on Colorado. We'll be there as often as possible until then, and something tells us you probably will be, too.

The end of an era? No, just the beginning of a new one. A Life of His Own
Diving right in with Tab Hunter