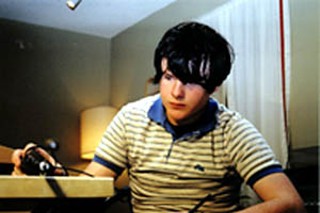 For a movie explicit enough to use the D word, V word, and a smattering of C words, it seems counterintuitive that Dear Pillow depicts no nudity or sex of any kind. To its filmmakers, writer-director Bryan Poyser and producer-cinematographer Jacob Vaughan, this is perhaps the very essence of their work. When questioned about their blue-balling tactics, Poyser concurs, "We made the decision that this is going to be a movie where nobody comes. No one."

While working its characters into a lather, Dear Pillow explores the art of getting off. Lorna (Viviane Vives) makes obscene and truncated phone calls, Dusty (Gary Chason) writes masturbatory fodder for the readers of the titular magazine, and Wes (Rusty Kelley) makes do with the frustratingly limited sexual outlets of the average teenager. Put these three in a room, and you have a veritable smorgasbord of dysfunctional sexuality that is at once funny and cringe-inducing. Before long the shocking discussions become interesting not for what is so frankly said but for what topics are so ardently avoided: the characters' own desires.

So where does the inspiration for such a bawdy tease of a script originate? The writer's own experience, of course. Writer/director Poyser implicates himself: "One night I got a call from this girl who basically did what Lorna does in the movie: She started having phone sex with me. ... I played along, as anyone would, and she hung up on me right in the middle of a sentence. As she was talking she mentioned that her boyfriend was there, and she asked if I wanted to talk to him, and I said, 'No, no, that's all right, I like talking to you.' ... I started thinking, 'Who is this person? Why is she doing this? Was her boyfriend really there? Was this a way to initiate their sexual encounters?'" Inspiration indeed.

Regardless of their source, these questions gird the loins of Dear Pillow. Vaughan and Poyser bring slowly into focus the true desires of their trio but roll credits before the motivations are revealed, leaving the viewer exhausted but certainly not spent.