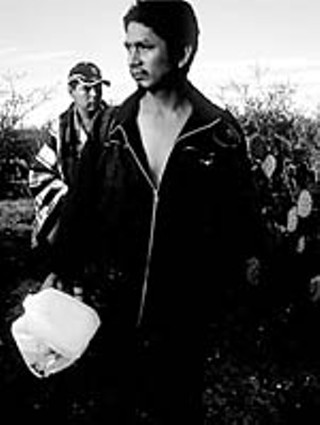 Ladies and gentlemen, this year's Golden Cojones award goes to first-time documentarian Tommy Davis, who walked 120 miles to film four of the thousands of Mexicans who illegally enter the U.S. on foot each year.

In shooting Mojados: Through the Night, Davis ate what the four men ate (increasingly green tortillas, while they lasted), drank what they drank (water scavenged from cattle tubs, when they could find it), slept among the cacti, and schlepped 80 pounds of gear.

Nevertheless, he managed to keep his spirits up, at least most of the time.

"At one point, I knew we were walking in a circle, but I didn't have a compass to prove it," Davis recalls. "Finally I just sat down on the ground and told them I needed a break."

Another challenge was that Davis knew neither Spanish nor his subjects well. After spending about six weeks asking around for a group of migrants heading out of the small Mexican town where he was staying, he finally met one the day before they left. "Oso" was the man's nickname. He was the veteran of several trips north, and he made Davis prove his grit by climbing a mountain with him. He also taught Davis the rules of the desert.

"You can't take a knife or anything that might be used against you," he explains. "And if anyone gets hurt and can't go on, they're left behind."

Davis met the other three men the next day. Their unfamiliarity with Davis and one another (plus their trying circumstances) meant the trip was not exactly rolling in witty banter. In addition, the men didn't want Davis to film some emotional moments, like their tearful departures from their families. However, through its stark, simple depiction of the crossing experience, Mojados still sends a powerful message.

"It just shows we have no clue what people will do for a job," Davis says. He recalls meeting a 12-year-old who had made it to Arizona but lost his family in the process.

"I asked where he was going, and he said, 'Florida,'" Davis says. "It was 110 degrees that day, and he was ready to just start walking."