With 'Jersey Girl,' Kevin Smith swaps out Jay and Silent Bob for a 7-year-old, all while 'The Green Hornet' looms

Jersey Girl, the new film from indie icon and inveterate Jersey Boy Kevin Smith, is, in the context of the filmmaker's career, something of an anomaly. For starters (apart from a blink-and-you'll-miss-it animated logo sequence), there's the notable absence of Smith's alter ego Silent Bob and stoner buddy Jay (Jason Mewes), which, in turn, means there's nary a bong in sight, nor is there the duo's Laurel-and-Hardy-on-dope stream-of-unconsciousness epithetery. Instead, Smith's newest is a sweet, likable romantic comedy that pits Ben Affleck's shallow PR warrior against his own conscience when he's forced by dark circumstance into a familial role he may not be up to.

"Apart from that opening logo [with Jay and Silent Bob]," says Smith from his NYC press junket, "which I put together at the last minute, they're missing completely, for the first time ever. But I felt I had to put that in there for the 13- and 14-year-old boys who are going to hate the movie, and the only thing they'll say about it is, 'The best part was the opening 13 seconds.'"

Despite the lack of Smith's trademark Jay and Silent Bob Greek chorus, or perhaps because of it, Jersey Girl is a smooth, mature, and genuinely heartfelt film that revolves around high-powered PR flack Ollie Trinke and his relationship to young daughter Gertie (Raquel Castro) and an incoming flame, video-store clerk Maya (Liv Tyler). It's a far cry from Smith's Clerks days, but then again so is the director, now a family man in his own right. Certainly this is the first of Smith's films that you could take a kid to without having to first duct-tape gun mufflers over their ears.

"That's indicative of the fact that when you make a movie with a 7-year-old girl at the center, it's tough to have a bunch of people running around yelling 'cock smoker.' For me, it's not like I'm about to head off in this new direction, folks, so, so long and thanks for all the fish – this is a one-off for me. It's just what I'm doing at the moment, and it lends itself to being a bit more sanitized by virtue of the fact that Jay and Silent Bob aren't in it. You remove those guys from the mix and immediately 75 percent of the film is sanitized by default. But it doesn't represent a change in direction for me. For me the real big change in direction is going to be my next film." 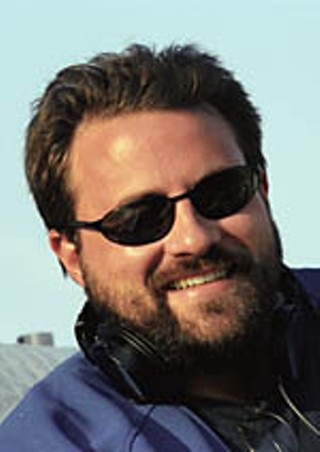 That would be Miramax/View Askew's The Green Hornet, a $70 million epic based on George Trendle and Fran Striker's 1936 radio serial and ABC's mid-Sixties television show that featured a pre-Enter the Dragon Bruce Lee as Kato to Van Williams' Daily Sentinel publisher-cum-crimefighter Britt Reid, aka the Green Hornet.

"That's really going to be way different from anything I've ever done. You look at Jersey Girl, and it's a relationship picture that's not that far removed from Chasing Amy in its mixture of comedy and drama. We just swapped out a lesbian for a 7-year-old girl. But Green Hornet, that's about as different as it gets from everything I've ever done."

The Green Hornet himself hasn't yet been cast, though both fans of the old series and Smith himself are eyeing no less than Hong Kong legend and all around ass-kicker extraordinaire Jet Li for the role of Kato. Just don't expect the you-know-who-two to make an appearance as anything other than a bad acid flashback in the audience members' minds. Especially since Jason "Jay" Mewes' recent troubles with both the long arm of the law and some grave pharmaceutical woes.

"Yeah, he was on the run for a about a year," says Smith of his longtime friend's difficulties. "Every time he saw a cop car he had to jump the fence. There was a bench warrant issued for this arrest in Jersey, and he was living out in California, knee-deep in the heroin and the Oxycontin really badly. For a year I was like, 'Look man, if you want to come over to the house I'll sit down and talk to you, but I can't have you coming inside, and I'm not going to make any more movies with you until you get and stay clean.'"

Fans will be glad to note that Mewes finally turned himself in to Jersey Johnny Law and immediately went into six months of court-mandated rehab, which he passed with flying colors. This April 6, says Smith with obvious pride, his friend will have been clean and sober for one whole year, adding, "That's something I never thought I'd see.

"These days, he hangs out with a crew of sober-living people who've had problems similar to his in the past, including Jack Osbourne. They still have a social life – they still go out to clubs all the time, but instead of drinking and doing drugs, they just pound fuckin' Red Bulls. I've known him for, what, 16 years, and he's in a really good place now."