Cultivating an annual event is tricky business, especially an awards show. Most such presentations have predetermined categories presented amid pomp and glamour, much like the Academy Awards. Yet the Texas Film Hall of Fame distinguished itself in its second and third years in 2002 and 2003 when it did not repeat certain awards categories and brought in new ones. That, asserts founding committee co-chair Evan Smith, is exactly the right thing to do.

"What's different about our fourth year is that the lineup reflects the maturity of the event. In our first year, we pulled in people randomly, hoping that no one would look into how we did it and just enjoy the show."

What a show it is. In its fourth year of honoring Lone Star cinema, TFHOF has grown out of its infancy and matured into a world-class event. Benefiting the Austin Film Society's educational and artistic programs, the celebration supports creative filmmaking and promotes the appreciation of film.

"Look at the lineup! Forest Whitaker, a great talent and emerging director; Robert Duvall, an extraordinary actor; Judith Ivey, so gifted. If there were a Mount Rushmore of screenwriting, Bud Shrake's face would be up there in stone. Having Ali MacGraw here for The Getaway, so many people from El Paso to San Marcos remember that film as a seminal moment in Texas filmmaking. Ethan Hawke, born in Austin and a great friend to Texas film, his contribution to filmmaking has been so much greater for his collaboration with Rick Linklater. Celebrating an actor of his age allows us to look forward to what he will do in the future."

The Tom Mix Honorary Texan Award is being bestowed on Duvall this year, an act of ceremony Smith feels is well-deserved.

"Duvall embodies so many of the characteristics of Texas film. Independence. Ruggedness. Real presence. A strength of character. And unquestionable dedication to the process. In some ways, he represents the best of Texas film more than some Texans. So, we thought, who better to give an award to than someone who is not Texan but projected those qualities onto the larger screen? And we named the award for Tom Mix who, in his own time, came to be associated with Texas but wasn't from here."

Not only does the TFHOF honor filmmakers, actors, screenwriters, directors, and films from, influenced, or inspired by the Lone Star State, it involves the community. In Austin especially, there is widespread support and acknowledgment of film as an active art and industry.

Yet, it's not only a celebration of film, it's about recognizing and acknowledging the support for film in the community. Since the old Mueller Airport site was reimagined as Austin Studios, moviemaking activity has increased locally and brought with it the expected economic upsurge. Austin has become home to a number of actors seeking to escape the Hollywood rat race, including Sandra Bullock. And having Harry Knowles sneak-preview The Return of the King and The Passion of the Christ at the Alamo Drafthouse for his Butt-Numb-a-Thon birthday party doesn't hurt, either. The long-lasting artistic effects are positive, and the short-term bucks pay off.

The outpouring of support from TFHOF benefits the Austin Film Society, which continues its focus on young filmmakers and supports them through industry training, jobs, and an internship program. Located on the Austin Studios' 20-acre production facility, the site consists of five stages, a production office, and screening room and has been home to 16 feature films including Miss Congeniality, The Rookie, The Texas Chainsaw Massacre, and upcoming releases The Wendell Baker Story and Cheer Up. The organization also works to bring film production to Central Texas and promotes film appreciation among the public and its membership with programming in local theatres, director appearances, and festivals. No wonder the TFHOF Awards presenters are as star-studded as the inductees.

"Dennis Hopper, Jonathan Demme, Treat Williams, Elvis Mitchell ..." Smith reels off the names of the two noted actors, the Oscar-winning director, and The New York Times film critic. "And Linklater is here for the first time in four years."

For Smith, this win-win situation is one that Austin's discerning audiences have earned.

"True films buffs and devotees of the Texas film experience understand that what makes a great Texas film is not always on the surface but what lies underneath." 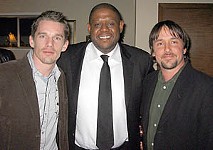