What's cool about gaming? Apparently, everything. 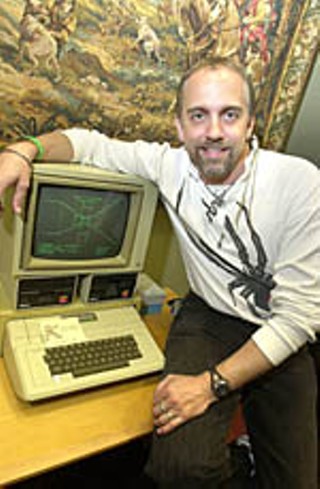 Brad King, moderator of the forum (and occasional Chronicle contributor), co-authored Dungeons and Dreamers: The Rise of Computer Game Culture From Geek to Chic, which covers Garriott, Spector, and the evolution of gaming from being the strict domain of Ren-fair Dungeons & Dragons enthusiasts to an expanded sphere of hip scenesters and artists.

Austin, with its blend of high tech and artistic sympathies, has been an instrumental breeding ground for developing this new image. "Austin turns out to be a great place for this to happen," says Garriott, the son of an artist and a NASA astronaut. "It's an old hippie town and the live music capital of the world. It's also a great high tech town, with Texas Instruments, IBM, and Advanced Microdevices. So it's really a high tech arts town, and it's perfect for computer games."

Garriott was a classic geek in high school. "I was sort of the king of D&D during that period," declares Garriott, who admits to having spent every adolescent Friday night at home with 50 to 100 fellow medieval role-play enthusiasts. With his silver jewelry and long, thin braid, Garriott still seems to hold his D&D days dear.

"The real issue for me was being the right age at the right time for some events that happened," says Garriott, who went to high school south of Houston from 1974 to 1979, a time that saw D&D's first publication, the Apple II computer release, and The Lord of the Rings on every high school reading list.

He used D&D. And it helped. Garriott made $150,000 off his first game, born of a seven-week class assignment when he was a teenager.

A few years older than Garriott, Spector wasn't a kid when D&D hit the geek scene. "I started playing the game in 1978, just a few years after Gary Gygax and Dave Arneson created it," says Spector via e-mail. "[I] never understood why most people considered this collaborative, creative, interactive experience to be something exclusively, or even primarily, for kids. If I had more time, I'd still be playing today."

So D&D is about more than capes and magic. Its strengths in storytelling are what made the slick games members of so many varied demographics play today. While Garriott stuck with medieval sword sorcery for 20 years while working on Ultima, he's begun to tweak the fantasy.

As games evolve to reinvent role playing, markets expand to include larger audiences. But D&D's strong interactive-story influence remains a part of the success formula. "We're in a digital age now," explains King. "What this means is that many people are beginning to look for things that are very interactive." The movie industry illustrates this with interactive DVDs and major Hollywood actors doing voiceovers for games. Synergy? "Yes. It's the place to be," says King.

"I'm constantly blown away at how cool gaming has become," says Spector. "We're not quite mass-market yet, but we're definitely not some fringe medium or cult phenomenon. We went from being the medium where only the weird kids knew about us to a medium where if you don't know about us, you are the weird kid."

Take a walk down Garriott's NCsoft hallway. Sure, you'll find some geeks, but not without running into some impressively pierced artist types first. You'll even find buttoned-up yuppies. "This business requires so many different kinds of minds to work on it," says Garriott. The symbiotic relationship between the far-flung talents of the "hip" and the "geeky" necessary for these games to come to life surely influences audiences.

But what about Austin's future, in particular, and its culture of hip high tech? Could the recently announced closing of Origin – Austin's original game company, founded by Garriott and his brother, Robert, and sold to Electronic Arts in 1992 – affect the city's standing as one of the epicenters of the industry? Will we lose our cool?

"Even with Origin gone, Austin has a bright gaming future," says Spector, a former Origin employee. "The Garriott brothers ... did more than create a single company. They seeded an entire industry, one that's now robust enough to survive the death, or at least relocation, of its first and most visible component."