Subsequent to both The Warriors and Mad Max, yet predating Blade Runner by a year, Escape From New York laid the groundwork for John Carpenter and Kurt Russell's ensuing masterpiece, 1982's The Thing 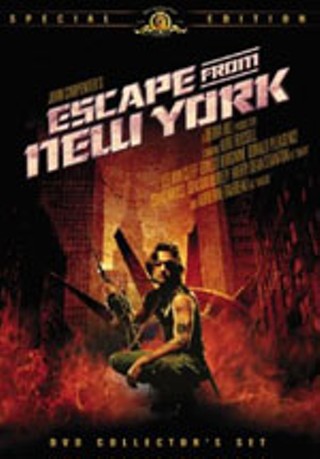 MGM DVD, $29.99 Stabler and Plissken: two of the three Snakes history will remember. With his rock star mane and 3am scruff, black eye-patch, and smirk, Snake Plissken (Kurt Russell) could well have been modeled after Oakland Raiders legend Kenny "the Snake" Stabler. Instead, Escape From New York co-star Lee Van Cleef brought to mind another antihero: Clint Eastwood. In a director's commentary left over from the 1994 laser disc release, John Carpenter and Russell acknowledge their debt of inspiration to the Sergio Leone veteran's casting as government heavy in this low-budget, sci-fi cult classic from 1981. Producer Debra Hill and production designer Joe Alves, in a second, more recent commentary (2001, pre-9/11), draw the parallel to Russell's send-up of John Wayne in Carpenter's hilarious Big Trouble in Little China, theorizing that both films are essentially Westerns. Subsequent to both The Warriors and Mad Max, yet predating Blade Runner by a year, Escape From New York, set in crime-infested 1997 when Manhattan island has become a walled federal prison, dispatches its squinty, tight-lipped gunslinger to save the president (a wonderfully buffoonish Donald Pleasence) from the baddies (Harry Dean Stanton, Adrienne Barbeau, Isaac Hayes) and "Cabbie" (Ernest Borgnine). Laying the groundwork for Carpenter and Russell's ensuing masterpiece, 1982's The Thing, the outcome is predictably comic book. A $6.5 million budget fed the film's scrappy tone, the production saved by St. Louis' fire-ravaged waterfront doubling for downtown NYC; one of Escape's matte painters, James Cameron, obviously siphoned off no small amount of stimulus for his own low-budget cult favorite. Like The Terminator, Carpenter borrows liberally from his own debut, Assault on Precinct 13, the result equally dated thanks mostly to the cars. Nevertheless, this two-disc special edition, which includes the wisely excised opening bank robbery sequence, is worth the upgrade if only to hear Carpenter reference one of Russell's Disney immortals, 1969's The Computer Wore Tennis Shoes.