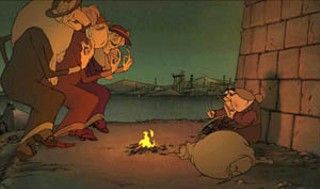 It's been a unique year for animation, what with the recent contretemps between Pixar and Disney, the rise of Japanese animé stateside via Satoshi Kon and the Cartoon Network's vital Adult Swim animé block, and now the unlikeliest of arrivals, French animator Sylvain Chomet's The Triplets of Belleville, recently nominated for two Academy Awards.

I say unlikely because the pairing of the words "French" and "animator" is only slightly more common than the pairing of, let's say, "Hitler" and "puppy love"; France may be known for its passionate embrace of all things cinematic, but strangely that's never included homegrown animators. There's no French animation industry to speak of, and so Chomet and his contemporaries are often forced to seek schooling and work elsewhere. In Chomet's case it was London, at the Richard Purdum Studio. These days, however, Chomet's in Scotland, where he's in the initial stages of building an animation studio of his own.

The Triplets of Belleville owes more to the surreal Delicatessen of French filmmakers Jean-Pierre Jeunet and Marc Caro than it does Disney. The story, about an elderly woman who travels from France to New York City to recover her son, a Tour de France cyclist kidnapped by Mafioso thugs, is like some nouvelle-vague noir: disjointed, odd, and unique.

"I grew up with Disney," says Chomet on the line from Scotland, "and my all-time favorite film is 101 Dalmatians, and I really think that the Triplets is following in those steps. I have to say that most people who were raised on Disney films are ultimately disappointed when they grow up and see the new ones. The thing is, Disney is using recipes, and they're trying to base their new films on the successful recipes of the past. For the kids, that's fine, because everything is new for them. But the parents know exactly how these recipes work because they've seen them all before, and it's always the same thing. I want to see different things. I want to see things that will be more appealing to adults."

There's no doubt Chomet's film is different. Combining traditional cel animation with the occasional CGI background, and filtered through what appears to be a pall of stale Gauloises, its fanciful depiction of a trio of former follies starlets sucking the flesh off platters of frog legs (oh, the irony) and vamping alongside Josephine Baker is très, très French, and likely to annoy and perplex George W. Bush and Garfield fans alike.

That the film lacks any coherent dialogue is another of its queer perks. In lieu of chatterbox characters, Chomet lets the fluid, often dark images speak for themselves while layering on a complex orchestration of sound effects that rivals Jeunet and Caro's sublimely squeaky bedroom rendezvous scene in Delicatessen.

"In the beginning I had thought about adding some voiceovers, some narration, to the film," admits Chomet, "but when we edited we just realized we didn't need it. I always think that the gestures of the characters, without any sort of voices, is more interesting. Voices can be very constraining. I wanted it to be funny and meaningful straightaway, and for that you didn't need the sound of voices or the dialogue."

The Triplets of Belleville opens in Austin on Friday, Feb. 13. For a review and showtimes, see Film listings.