Sailor Scout and the Chaperone

A father prepares for Ushicon 3, the Austin Animé Convention 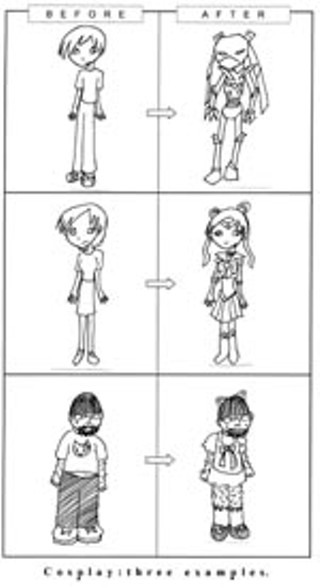 I'm taking my daughter Angelica to Ushicon this year. Ushicon is Austin's annual celebration of animé and all things manga-related, and this is its third incarnation; my daughter is tall and blond and has a predilection for Sailor Moon and the works of Hayao Miyazaki and has just turned 13. She's never been to a convention before. She's looking forward to it with much excitement. I'm experiencing something more like trepidation.

It's one thing to be fascinated by the world of Japanese animation and comics, to enjoy the (usually) futuristic adventures of cute and/or fierce characters as they battle against or with robots, alien invaders, magical beings, and so on. It's one thing to be in awe of Miyazaki's Spirited Away or to appreciate the emotional nuances in Millennium Actress by Satoshi Kon, to be moved by Keiji Nakazawa's graphic novel I Saw It, which relates, from a survivor's perspective, the bombing of Hiroshima. It's one thing to applaud Pikachu's use of the Quick Attack when Scyther, say, is expecting Thundershock instead, or to cheer as Rei Ayanami and her comrades defend Tokyo-3 against the Angels of Neon Genesis: Evangelion. All those things are one thing.

It's quite another thing, I'm imagining, to share the nicely appointed expanses of the downtown Marriott with a ravening horde of true believers, most of whom will be about three decades younger than me and likely dressed in costumes inspired by their favorite animated fantasy. Angelica, for instance, will wear the garb of one Sailor Scout or another, while I will be decked out as a father who works for the Chronicle and is in attendance strictly as a chaperone.

Besides offering myriad opportunities for meeting and carousing with hundreds of like-minded J-pop fanatics, animé cons also feature live performances by singers famous for their renditions of animé theme songs or soundtrack hits. (Koda Kumi, known for her work on Final Fantasy X-2 and the upcoming Cutey Honey live-actioner, will perform at Ushicon.) There are panel discussions by voice actors, artists, design teams, all the various creatives responsible for one show or another. There's the staged exhibition of cosplay, which is what they call the whole dressing-up-in-costume aspect. There's an art show, and a video-game room where the newest games are premiered, and a dealers' room chockablock with bright plastic merchandise and glossy-covered manga, and a Saturday night dance, and a shoujo pajama party, and all sorts of things that will appeal to a 13-year-old animé fan whose father will be there, too.

Strictly as a chaperone.