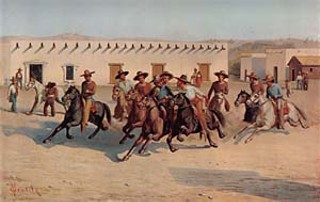 Brace yourselves, devotees of Alamo and Texas Revolution lore: The prevailing mythology is about to take a few more hits, this round courtesy of Joseph Tovares and his new documentary, Remember the Alamo. "The Alamo is such a loaded place for everybody; nobody emerges clean," observes Tovares. The surprises in Tovares' latest film, however, don't involve the usual gringo suspects -- the Jim Bowies and Davy Crocketts -- but the Tejanos. These Mexican nationals who settled Texas when it was still northern Mexico have long been viewed as the ultimate victims of the upheavals that produced the Republic of Texas and ultimately the Lone Star State. After all, the story goes, subsequent to their supporting role at the Alamo, attempting to turn Mexico back, these earliest (after the native people) Texas settlers were ignominiously turned upon and driven from their homes by the subsequent wave of Anglo American settlers -- in a gringo landgrab. Explains Tovares, the San Antonio native of Tejano descent who last gave us Zoot Suit Riots (2001): "Texas history is very messy; everyone is always taking from somebody else."

Tovares, who is now based in Boston, got interested in this doc because he was keen to explore the lives of his Tejano ancestors who go back to late 17th-century San Antonio. "I knew that in earlier versions of history, the Tejanos had essentially been left out of the books. And though they were finally acknowledged in the Sixties and Seventies, I think they were then overly romanticized. I suspected that somewhere between those two extremes was the real story," Tovares explains. His big worry was that he would be perceived as an angry Chicano filmmaker out to set the record straight about the Tejano participation at the Alamo and the fight for Texas independence. "That's not who I am, and that's not what this is about," Tovares points out. His film, in fact, turns up some surprising revelations about exactly where Tejano sympathies lay during this time in history.

One major revelation of Remember the Alamo is that -- contrary to the conventional wisdom -- the Tejano leadership, under Jose Navarro, encouraged and actually joined with Stephen F. Austin to bring Anglo settlers to Texas in the 1820s, and then worked very hard to make life comfortable for them simply because of basic economics. "These guys were living on the frontier, they were sick and tired of being poor and they wanted economic development," Tovares explains. "They were, for all practical purposes, like states rights Republicans; they didn't want Mexico City telling them what they could and couldn't do. They were in Texas, settling the frontier, and they wanted a growing economy. They wanted to be tied into the world economy and they thought the settlers could do that for them."

The film's other big kicker is that Austin's Anglo settlers wanted and needed to bring their own plantation-style slavery with them to Texas, something Mexican law forbade. Navarro managed to accomodate the Anglos' needs by legislatively circumventing Mexico's slavery prohibitions.

What kinds of reactions are you expecting to this film?

Joseph Tovares: I think we discovered some things that will be very tough for Mexican-Americans to deal with. The big one is slavery -- when [José Antonio] Navarro sneaked that through the Mexican Legislature and enabled plantation-style slavery to happen, that's not easy for the Chicano community to deal with. Also difficult will be acknowledging the fact that slavery was present before then -- it wasn't plantation-style, but it was slavery. The Tejanos have always been portrayed as anti-slavery. And that's not the case, certainly not for the Tejano leadership. Scholars have known this, but I don't think it's widely known among the general public. And many who are aware of this information don't want to acknowledge it; I'm curious to see how folks will react. When the Tejano participation at the Alamo and then the fight for Texas independence was finally acknowledged, it was a very celebratory time for Mexican-Americans whose role in all of this had been ignored for so long. But, it's a bit of Faustian bargain the Tejanos made with the settlers, because while Navarro enables Austin's settlers to come to Texas, eventually the entire Tejano community was overrun and lost everything at the hands of Anglo settlers. My family supposedly had land right near downtown San Antonio, and they lost it.

AC: And what do you hope people will take away from your film?

JT: I hope that the film will make people think about Texas history and Tejano history a little more honestly and openly and confront certain demons. The Anglo community has been made to confront demons a lot lately, but for the Chicano community, this will be a different experience. It's really a matter of taking a look at our history and taking a good honest look at what we did and how we did it and what that means for us today. And that means we have to come to terms with a history that is much more complicated than anybody ever told us -- one that's racially complicated and complicated by class and nationality. I think there's a lot to learn about ourselves by looking at the Alamo and the Alamo participation.

Remember the Alamo screens as part of the Texas Doc Tour on Wednesday, Jan. 21, at 7 & 9:45pm at the Alamo Drafthouse Downtown (409 Colorado). Joseph Tovares will conduct a Q&A after each screening. Tickets -- $4 for current Austin Film Society members and new members joining before the screening, as well as students; $6 for nonmembers -- are available through the Austin Film Society by phone (322-0145) or at the venue one hour prior to first screening. For more information, check www.austinfilm.org.