The tall, dark, and handsome knight returns: Adam West on the record, in Austin. 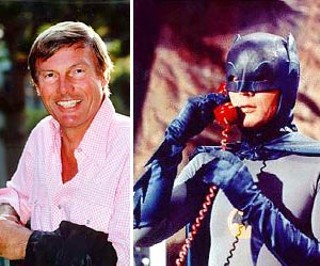 Holy Blast From the Past (in Tights, No Less) Dept.: Once in a full, blue moon, an event happens that's so mind-warpingly cool that we here at "Short Cuts" positively jump up and down and stomp our feet with unbridled joy (and if that's our reaction, you can only imagine what Harry Knowles is doing -- probably the Frug). The Alamo Drafthouse has cornered the market on cinematic badassery for the past few years, and this Friday, Jan. 9, they're topping themselves yet again with a screening of the classic 1966 Batman, with no less than die Fledermausmensch himself, Adam West, live in the theatre, and, holy road rage!, the original Batmobile parked out front, flaming the ankles of dazed Cuba Libre patrons and frenetic film fans alike. Held in conjunction with the Texas Superhero Sci-Fi Collectors Expo, Jan. 9-10 at the Crockett Center (6301 Hwy. 290 E., www.texassuperhero.com), which will also have Boy Wonder Burt Ward and Riddler Frank Gorshin in attendance, the Alamo show ought to bring back truckloads of memories for fans who, like us, grew up in a household surrounded by all things Batman and/or MAD magazine. Lucky us, we managed to score a brief chat with West, who has spent the intervening years doing everything from voice work on such shows as The Simpsons, Family Guy, and Johnny Bravo to appearing in CBS's recent Batman reunion show, Return to the Batcave: The Misadventures of Adam and Burt (not to mention his own immensely watchable Biography on, where else, the Biography Channel). Recovering from a cold caught while shoveling snow at his Idaho home (where the hell's Alfred when you really need him?), West noted that his Alamo gig isn't the first time he has been to Austin. "We actually premiered the Batman movie down there in '66, at the Paramount. I have pictures of it somewhere. It's been 35 years, though, but I'm still out there and working. I've got a couple of new movies, one of which is with Carmen Electra for MTV, and I'm in the current issue of Esquire." Rumors of West's autobiography coming to fruition -- a fanboy's wet dream -- are indeed true: "I look at it as the definitive answer to what all the fans have been asking, in other words, not only highlights from every single episode, but also behind-the-scenes info, relationships, and just a complete guide, if you will, to Batman." With a steady stream of convention and charity appearances, West sees his old pals Ward, Gorshin, and others now and again, but says the fact that the Batman character's usurping of his life is, all things considered, fine with him. "I think the best part of it is probably knowing that it's brought a lot of happiness, a lot of joy, to a lot of people from all over the world. I'm very grateful that I had the chance to create a character that has this kind of longevity. There aren't many people in this business that get that opportunity. And let's face it, it's fun to be an icon." What did West think of those Burton/Schumacher remakes? "Terrifically imaginative, very artistic, very expensive exercises, but they lacked something that people wanted to see." And what was that? "That was the funkiness." It's true: No one does the Batusi like Adam West can. If you're lucky, he'll bust out the moves this Friday. More info at www.drafthouse.com.