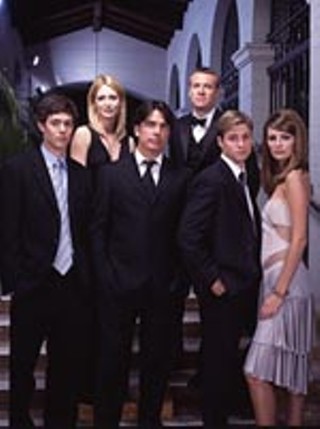 Fox's The OC weathered swingers balls and Chrismukah to make the "TV Eye" Top 10 this year.

1) Jack Osbourne's man-flaps on The Osbournes (MTV). Not quite breasts, definitely not pecs. Eeeeeow.

2) Kenneth Mars (Young Frankenstein) in a Speedo and cowboy boots as Otto Mannkusser on Malcolm in the Middle (Fox).

3) Gary Busey in drag on I'm With Busey (Comedy Central).

5) "Glory hole" uttered on Queer Eye for the Straight Guy (Bravo) -- in an NBC rebroadcast.

6) Fabulous trannies working it on The Disco Ball (an ABC special rerun in July).

7) Bill O'Reilly peddling his self-help book on The View (ABC).

8) A proud David Letterman showing off his seedling to his Late Night (CBS) audience.

9) Delia (Vivien Cardone) uttering "shit" at the dinner table on Everwood (WB). The word was muted. Still, such a sweet thing eats with that mouth?

10) President Bush having a press conference and an exclusive one-on-one interview with Diane Sawyer on an ABC News Special in the same week. A nice follow-up to his Thanksgiving Day photo shoot.

Top 10 Disappointments (These Are in No Particular Order):

3) Are The Simpsons "Treehouse of Horror" episodes not supposed to be funny anymore?

4) The cancellation of The Lyon's Den (NBC), viewed in order to watch Frances Fisher as the deliciously evil Brit Hanley.

5) The destruction, then unceremonious cancellation, of Boomtown (NBC).

6) The end of Sharon Stone's three-episode arc on The Practice (ABC). As close to an "and then they died and it was over" ending as I've ever seen.

7) Ongoing use of poor Mexicans as the butt of jokes on Arrested Development (Fox).

8) Wasted opportunities. When last season's My Wife and Kids (ABC) ended with teenage son Michael's (George Gore) girlfriend pregnant, there was potential for this third-rate sitcom to put some meat on its narrative bones. Instead, it resorted to the same lame jokes ("I've got nine months to take Junior from dummy to daddy").

10) The continuing obliviousness of the public to the effects of media consolidation.

5) Curb Your Enthusiasm (HBO) -- No one plays a sorry-assed bastard better than Larry David.

8) Scrubs (NBC) -- Still outrageous, yet sometimes so tender it hurts. The episode when Carla's mother passed away? Where's my tissue?

9) Nip/Tuck (FX) -- Uneven but extremely compelling drama that starts with the provocative question, "What don't you like about yourself?"