Tweet
print
write a letter
This year's Top 10 lists, like all lists, are snapshots of moments in time. Tomorrow, next month, or next year, the items might change a bit -- or maybe not at all. Movies are finite, but lists go on forever.

The top three vote-getters in this year's poll earned their places by being the only three films that showed up on each of the reviewers' lists. Though not in agreement regarding their order of ranking, Lost in Translation, American Splendor, and Capturing the Friedmans were the only films that all three Chronicle reviewers placed somewhere on their individual Top 10 lists. This voting system also allowed each reviewer's No. 2 choice -- in each case, a film that doesn't appear elsewhere on the other two lists -- to tie for fifth place, giving us an unprecedented six-way tie for fifth place. It should also be mentioned in regard to any potential conflicts of interest that the Chronicle's overall No. 2 choice, American Splendor, is based on the comic books of Harvey Pekar, who is also a longtime Chronicle contributor.

One thing that becomes obvious looking over these lists is that the year of the smaller film may have finally arrived. Despite the attempts of the studios and the MPPA to squeeze the smaller movies out of view with their hasty adoption of the screener ban, the vote tallies prove that the smaller movies found their way into the Top 10 in greater number than the studio efforts. Documentaries also came into their own as feature films this year, showing up in greater numbers on all the individual lists.

What does it all mean? Lists are summaries, guidelines, opinions, suggestions. They offer ideas about movies to watch -- and, of course, should always inspire more lists.

5) (tie) The Fog of War: Eleven Lessons From the Life of Robert S. McNamara Votes: 9 Mentions: 1

There's such a compendium of human pathology on display that we almost lose sight of the deft filmmaking that directs our emotions to and fro.

2. The Fog of War: Eleven Lessons From the Life of Robert S. McNamara

Errol Morris, at last, nabs his white whale and, before it's through, smelts his harpoon into a plowshare and finds the human being within.

This stunningly accomplished debut from filmmakers Springer Berman and Pulcini accomplishes what few thought could be done: creating a warm, human story from a curmudgeonly cult comic book.

With this captivating movie that's so different from her debut outing, Sofia Coppola proves she's a director of real vision and unique sensibilities.

Amid the savagery of the slums, this Brazilian drama reverberates with the voices of the voiceless and the possibility of hope.

Best choreography of the year, a constant exhilaration.

7. The Lord of the Rings: The Return of the King

So disappointing after the previous two episodes, which were both No. 1 on my last two years' lists -- still, there's at least one great hour of filmmaking here.

The movie is like a transfixing novel that you never want to finish reading, so in love are you with the characters and their complications.

Teaching is an art form, a calling, the most intrinsic of human interactions: This French documentary inspires viewers not to settle for less.

The first bloom of a young actress (Scarlett Johansson), the maturation of a writer and director (Sofia Coppola), and the revitalization of an institution (Bill Murray). Perfectly wonderful.

2. All the Real Girls

David Gordon Green reasserts his position as the heir to Malick with this aching chronicle of the before, middle, and ugly aftermath of love.

A valentine to Harvey Pekar and all the other bitter, gloomy cranks of the world. It's about time we got our due.

So what if Jim Sheridan's autobiographical story of an immigrant family's survival is sentimental? I know I needed a good cry, and you probably do, too.

Gone With the Wind? Anthony Minghella just reduced it to rubble with his gorgeous, ruminative, and, yes, definitive Civil War epic.

Up, up, up with this cheeky ode to the Sixties sex comedies.

Dogme 95 finally made good on its promise with this haunting Danish film about a car accident and the romantic quadrangle it leaves in its wake.

Bryan Singer delivers not only a superior sequel and the most thrilling action set-pieces of 2003 (take that, Wachowski Inc.), but also slides a gay subtext into a megabudgeted Hollywood pic. Sneaky.

Gus Van Sant finally shakes that getting-soft slump with what sounds like the setup to a bad joke -- two guys walk into a desert, only one comes out -- but plays like a lost Antonioni.

Both Bill Murray and Sofia Coppola deserve Academy attention for this flawless, passionate, and above all, human comedy. Takashi Fujii as the host of "Matthew's Best Hit TV" deserves something, too, possibly a Xanax.

Cheaper than rehab and twice as much fun, this hellish, hilarious descent into the zippy mire of hardcore amphetamine tweakers is witty, terrifying, and immensely fun, if you like that sort of thing.

This never would have made it past the first seven seconds of a studio pitch meeting, but it's everything studio dramas strive to be: heartfelt, funny, and devastatingly emotional.

The most amazing, impossible-to-turn-away-from record of a familial train wreck ever recorded, and hopefully not the beginning of a new Fox TV reality trend.

Harvey Pekar is Paul Giamatti is Harvey Pekar, et cetera. Yet more proof that Cleveland's favorite cartoonist son is more interesting than most of those superhero fellows.

6. The Lord of the Rings: The Return of the King

Slightly imperfect on its own, but as the trilogy capstone, and taken with Jackson's previous two chapters, a majestic, butt-numbing masterpiece. Love those Orcs!

So harrowing you'll probably end up washing everything in Woolite in your sink from now on.

Dirty Pretty Things, Master and Commander: The Far Side of the Universe, X2: X-Men United, Triplets of Belleville, Monster

The Good, the Bad, and the Ugly (theatrical)

Gods and Generals: Ron Maxwell's inert, four-hour-long Civil War follow-up to Gettysburg should have been left for dead on the battlefield. 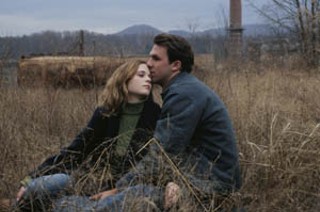 The Fog of War: Eleven Lessons From the Life of Robert S. McNamara, 28 Days Later, Raising Victor Vargas, The Triplets of Belleville, Melvin Goes to Dinner

View From the Top: You mean the top of the trash heap? 'Cause even that's generous.

The Weather Underground, Once Upon a Time in Mexico, May, Thirteen, The School of Rock

Crispin Glover (Willard), Johnny Depp (Pirates of the Caribbean: The Curse of the Black Pearl), Nick Nolte (The Good Thief)

Peter Jackson (The Lord of the Rings: The Return of the King), Jonas Åkerlund (Spun), Sofia Coppola (Lost in Translation)

Dreamcatcher: It's as though Stephen King (whose original novel was no great shakes to begin with) and the once-great Lawrence Kasdan lost some horrific, EC Comics-style bet with the devil.