Dragons have a PR problem, and this movie doesn't help. 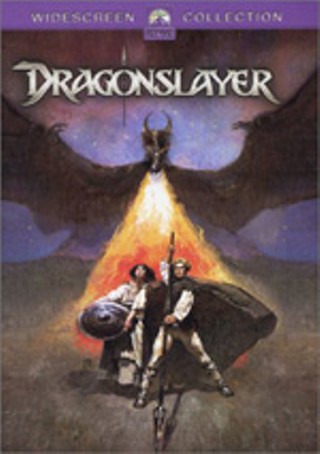 Paramount Home Video, $19.99 In days of old when knights were nowhere near the landscape, dragons and wizards ruled. That's the premise of the 1981 live-action drama Dragonslayer, an engaging but unsatisfying joust with the past from Matthew Robbins, whose short-lived career included Corvette Summer and *batteries not included. Dragonslayer doesn't just lag, it lumbers along, wounded by a tedious script and slow pacing. There are no extras, no commentary, no outtakes, nothing to improve it. And that's a shame, because it is well cast, with Ralph Richardson chewing the scenery as the sorceror Ulrich and Peter MacNicol, recently seen as quirky attorney John Cage on Ally McBeal, as his apprentice, Galen. Galen sets out to destroy the dragon with the cross-dressing virgin (natch) Valerian (Caitlin Clarke), played to perfection in nontypical heroine form. Add the wickedly handsome John Hallam gloriously cast as the evil Tyrian, the king's henchman involved with some hanky panky in the choosing of virgins to slaughter, and so goes the story. But if you can dismiss the uneven scripting, the dragon is the real payoff. Though it is awkward in close-up, where the stop animation is obvious, the overall affect is astonishing. Writhing and glittering beasts, the creatures rear up and breathe hellfire with blazing, believable effect, and a scene of dragonlets munching on the brave sacrificed princess Elspeth (Chloe Salaman) still induces queasiness. Dragons are tough business, cinematically. They're sort of the opposite of unicorns on the good guy-bad guy scale, and they have a serious PR problem. Dragonslayer doesn't help, as these dragons are not just monstrous fire-breathing critters -- they also breed, get in bad moods, and carry grudges. In fact, they'd probably have a good legal case against Hollywood with this movie as a prime suspect. If they're smart, they'll contact the Dragon Union and ask John Cage to represent them.