Gear Up and Get Away

The escapist magic of the holidays' hottest games

Long for a break from your 9-to-5 gloom? Weary of pushing papers across a drab cube? Then how about a change of scenery? Better yet, how about a change of reality? Yes. You heard right. It's time. Time to let loose of your conscious self and buy a ticket for the ride. Toss your hair. Toss your Swingline. Toss your boss. And enter the dreamscape of Dungeons & Dragons: Heroes. But don't slip in with just one foot in the dungeon. Dear adventurers, if you dare cross this threshold, prepare to loot, fight, and scrape from one talon-biting quest to another. For there be ferocious, fire-scaled dragons soaring around these parts, and they don't react kindly to virgin blades. Straight from the gate, Heroes engulfs players in an exquisitely detailed, blood-soaked dungeon world overrun with gauntlets, golems, and gold galore. That's right, swashbucklers. Get ready to gear up and gulp down a vial of berserker's brew. Slip into your best suit of plate armor, and steady yourself for a rousing sword-and-sandal caper of the otherworldly kind. A role-playing fantasy game of the hack-and-slash variety, Heroes enlists once and future weekend warriors with a mission to defeat the horrendously evil, dastardly mannered, and much-maligned wizard Kaedin before he crushes the land of Baele with his darkened fist. Herein, snake-infested swamps, troll-filled hinterlands, and mountainous caverns await your footfalls ... and your fears. Understandably, adventures of this magnitude tend to suck time like a Hoover upright. So, be warned: You may need to cash in a sick day ... or three. -- Marcel Meyer

If you've ever felt the urge to waylay a naked fat dude from behind -- in a bath house run by the Russian mob, no less -- then True Crime: Streets of LA is the game for you. Drawing on the rogue-cop scripting of Max Payne, vehicular mayhem of Grand Theft Auto, and grim locales of Dark Blue and Training Day, it drops the player into the life of one Nick Kane, resident loose cannon of the LAPD's Elite Operations Division. As luck would have it, Nick has a past: unresolved issues from his supercop father's mysterious disappearance and an avuncular mentor voiced by Christopher Walken. Much like GTA, Streets of LA offers the option to follow the prescribed missions or spend the bulk of your time crashing cars and beating up random pedestrians. The plot itself is nothing to write home about, and doesn't exactly forestall the stereotype that all ex-Communists are gangsters, whether Russian or Chinese. But thugs are thugs, and True Crime has reams for Nick to either draw his piece on or mix it up with kung fu-style. The play is smooth, controls fairly easy to master, and the dialogue between Nick and Rosie (his desk-bound, spitfire partner) corny to the nth degree. Let's face it, who hasn't wished they could shoot it out with a warehouse full of mobsters at some point in their lives? -- Christopher Gray 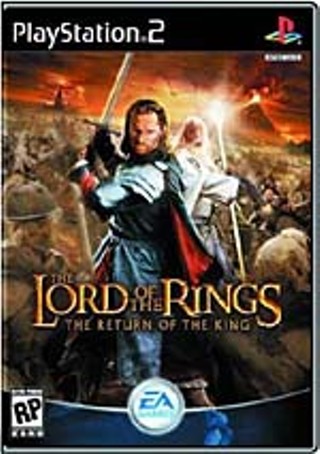 Winter in the new millennium. You know the drill: Lord of the Rings. Middle-earth. Rocks and armor, Orcs and lava. That deep, diaphragm-rattling rumble that signifies the voice of evil. Like Peter Jackson's work, Electronic Arts' souped-up Return of the King is quite the spectacle. Full of footage from The Two Towers film, it picks up where last year's frenetic Two Towers game left off. Namely, in a thick den surrounded by nasty Orcs, stanky trolls, and even fouler beasts that do not sleep. Return of the King's primary improvements: It can now be played by two players at the same time, à la Ikari Warriors, and now you can thrash baddies with the old wizard Gandalf himself, in addition to Aragorn, Legolas, Gimli, Samwise, Frodo, and other secret characters. The game's path is three-pronged: the path of the wizard, the path of the hobbits, and the path of the king. You'll find yourself alongside Ents, helping Eowyn and the Riders of Rohan, and navigating the bowels of Mordor itself. The fighting is all slash-and-block combos. Experience points are gained by felling foes, and in doing so special fighting combos are gained, some of them loads of fun, like Samwise's invisibility cloak and Gandalf's magical shield. Not only do new levels appear, but also interviews with the actors and other cool extras. Though some levels have multiple objectives, it doesn't take Amedeo Avogadro to solve them. But so what. It's not every day you get to be a wizard traipsing through Middle-earth dodging Oliphants. -- Michael Chamy

Ever daydream of strapping into the catbird seat of an exotic Ferrari, overpriced Jaguar, or even one of those alien-looking Mini Coopers? For tens of thousands of dollars less, the racing simulator Project Gotham 2 aims to approximate the fantasy. Granted, it's more like C-grade pleather compared to the real cowhide, but car games of this ilk also afford enthusiasts the impossible opportunity to squeal rubber through the streets of London, Sydney, and Moscow all from the edge of their La-Z-Boy. What's more, PGR2 improves upon its predecessor, now offering Xbox Live support that connects players from New York to Austin on head mics and ear buds so that near-crash profanities can be shared in real time with friends and foes alike. Despite the simplicity of simulator games like PGR2, this title offers beaucoup bells and whistles beyond the gas, brake, and track of its competitors. Highly evolved graphics, ample single and multiplayer options, as well as hundreds of music tracks to accompany your driving experience, are all part of the sticker price. And they even throw the undercoat in for free. -- Marcel Meyer

It's in the game ... and in the front office, too, in this newest edition of what is perhaps EA Sports' most successful all-around game. Relatively simple basic controls and lovely graphics make this much easier for beginners to enjoy than, say, basketball or football, which requires considerable skill to achieve any level of realistic play. Yet, as with all good games, there's a lot of depth and subtlety, so you can continue to learn new tricks and features as you become more experienced. The game play is sophisticated without being unwieldy; there are some plays I may never even try to master -- give-and-gos or various skill moves -- but I can pass the ball down the field, dribble, sprint, tackle, and bend my free kicks with some degree of accuracy, even though I still don't really know what my D buttons are. New this year is control of players off the ball -- up to three potential receivers, for instance, as you prepare to pass upfield -- plus a wealth of managerial options, such as preprogrammed plays for free kicks, and a variety of formations and playing styles. Also new -- and this is what will appeal to the true soccer aficionado -- is a wealth of new teams, stadiums, sounds, and players: 24 pro leagues from around the world, plus 37 national teams, and 16 other top club teams, all updated with their 2003-04 rosters. In all, EA claims to have some 350 teams and 10,000 players, each rated in some 23 different skills, from dribbling and shot accuracy to aggression and field awareness. You can play them one-off against each other, or run through an entire tournament or season. There's even a five-year "Deep Career Mode" in which you try to develop a championship squad over time, juggling lineups, searching the free-agent market for new players, scheduling games, even setting up a weekly training regimen for each player. Or there's the online mode, where you play, trade, or chat with other gamers worldwide. That's a bit much, even for me. What I'm working on, instead, is taking Torquay, the English third division squad from the seaside resort where Fawlty Towers was based, and getting them to where they can win the FA Cup by 2008. I'll let you know how it goes. -- Nick Barbaro

Project Gotham Racing 2, The Lord of the Rings: The Return of the King, True Crime: Streets of L.A., Dungeons & Dragons: Heroes, FIFA Soccer 2004