Harry Knowles' Butt-Numb-A-Thon outdoes itself. Like, totally. Read on to regret not having attended. 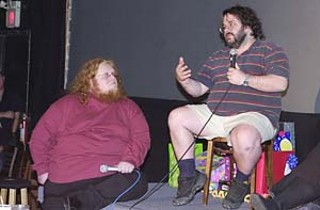 Director Peter Jackson (right) and Internet guru Harry Knowles, are seen discussing the minutiae of overnight Kiwi (and New Line) folk hero Jackson's concluding Lord of the Rings chapter The Return of the King, which was screened in Austin in superduper, tippy-top-secret form this past weekend as part of Knowles' and the Alamo Drafthouse Downtown's fifth annual Butt-Numb-A-Thon. The event drew a record overflow crowd of film fans from across the globe, many of whom resembled the zombies in BNAT Aussie export Undead by the time the 24-hour event concluded at 1pm Sunday. (Photo By John Anderson)

I'm Getting Too Old for This Shit Dept.: In the end, I almost didn't make it. With family in town from far away and a full plate of assorted holiday-esque responsibilities, my chances of attending more than a precious smidgen of Harry Knowles' fifth annual Butt-Numb-A-Thon -- which unspooled to a packed house of fanatical film fans from far and wide this past Saturday and Sunday at the Alamo Drafthouse Downtown -- were slightly slimmer than a post-Atkins Twiggy. But after packing the 'rents off to bed Saturday evening, I wandered over to discover Buster Keaton's magical The General -- with a live, in-theater soundtrack by the excellent Guy Forsyth Band -- charming the crowd to heaven and back. I'd already missed the big kickoff (see photo, above), The Lord of the Rings: The Return of the King with director Peter Jackson in attendance. Somehow, however, Knowles topped that: Dawn on Sunday saw Mel Gibson's controversial The Passion of the Christ, with, you guessed it fanboy, the director on-stage and basking in the adulation during the the post-film Q&A. All in all the single most breathtaking lineup presented in a fan-friendly format that I've ever attended, and with Gibson's appearance, a historic event, as well... Attention queue masters and Lords of the Ringlets: Megan Hagins is convening a line party for the opening of Jackson's big finale, beginning Tuesday, Dec. 16, 6pm at the Alamo Drafthouse Village. Expect costume and trivia contests, live music at 9pm from fiddler Chris Peterson, and more. Plus, it's a benefit for the Capital Area Food Bank, so bring at least two cans of nonperishable food items (remember: nobody likes lima beans) and help keep our homeless hobbits roly-poly. For more info, call 873-7543... East Austin A-OK Dept.: East Austin Stories, 90 minutes of short documentaries in and about East Austin, will be screened for free Tuesday, Dec. 16, 6:30pm at Our Lady of Guadalupe Catholic Church (1206 E. 9th St.) and later that same night at 9:30pm at Cafe Mundi, 1704 E. Fifth. The film compilation is the result of a collaboration between UT student filmmakers and residents and organizations in East Austin, including students from Reagan High School's Media Production Class. Highly recommended (and bring a blanket to the Cafe Mundi screening unless you want to freeze your Bolex off).