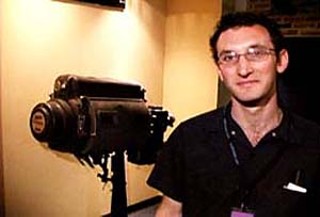 Finding sympathy in a man whose passion for building cars meant only to destroy other cars supercedes his passion for his wife, who has slept on the couch for the past decade, who calls his teenage son "faggy" after he dyes his hair pink for a punk show, and who shouts things like "Smash and pass! Boom-boom-boom-boom!" in a twangy Jersey accent even as others label him a "legend in his own mind" (or, as his estranged wife says, "a sick fuck") is no easy feat. But Jesse Moss (Con Man), a Manhattan-based documentarian who started the production company Mile End Films, has done just that with Ed "Speedo" Jager, a veteran demolition-derby driver who counters every triumph on the track with heartbreaking insolence off of it. Speedo: A Demolition Derby Love Story has had successful festival runs at South by Southwest 2003, and in Newport and Boston, and Moss was recently named an independent filmmaker to watch by Filmmaker magazine as he works on a project on "conservatives in Hollywood" for AMC. After I rudely interrupted Moss on his cell phone at a Williamsburg bar, we resumed an interview the next morning, with Moss at the Mile End office.

Austin Chronicle: How are things going for the film now that you've run the festival course?

Jesse Moss: Well, it was picked up by POV on PBS, which I think is a really great home for the film. I'm excited about that, even though it's not happening till next summer. I have to go back and fix some stuff and finish certain things, and I have to deliver the film in February. It's not really the kind of film you'd expect to see when you tune into PBS, which will hopefully work in its favor. Actually, I never saw them picking it up: It's about a white guy. It's not an overtly social issue film, but they're very excited about it, so that's cool.

AC: Does the POV pickup mean you've given up on theatrical distribution?

JM: I think I'm being kind of realistic about that. It's unlikely at this point that a major distributor would take it on. I was kind of encouraged by Spellbound, not because I thought my film was similar in any way, but I thought here's a story that's kind of a real independent film. It doesn't have a star, and it's not about music, but it succeeded theatrically. It's very Americana; it sort of tapped into something. I thought, you know, maybe I can capitalize on that interest to get somebody to pick up Speedo. But you need to be in a very high-pressure, competitive environment to get somebody to pick up a film unless you get the one person who just falls in love with it. People seemed interested at South by Southwest when it was there, but it wasn't in competition, so I couldn't come out with a big award and capitalize on that. I'd say the major players who could have picked up the film saw it, and there was some interest. It's like any documentary: They kind of don't know what to make of it unless it comes out of Sundance with a big award. They want that validation before they take that risk. And even if it has that validation, sometimes they won't take that risk.

AC: Speaking of Spellbound, what about this whole quirky, only-in-Americana documentary backlash? What, if anything, separates Speedo from those weird, funny, but ultimately inconsequential documentaries about weird and funny people? 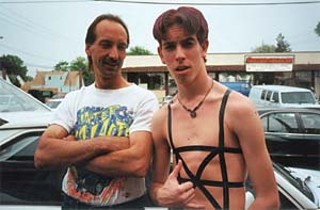 Speedo
JM: I think it always concerned me when I was making the film that people would think that I was slumming. Any documentary filmmaker worth their salt has those concerns when you're making a story about a culture, a community, a character who lives in a very different world than you do. I lived in Manhattan, and I was making a film at a racetrack. I thought, what do they think of me? What do they think of my motives? What are my motives? I didn't know what shape the film would take, but I knew what I responded to. What interested me about the story was Speedo's struggles to be a father, to be a man providing for his family, to deal with his relationships, with his marriage falling apart. Those were all things on an emotional level that I could connect with. His struggles were very universal, while the backdrop might be unfamiliar to us. ... That's the great privilege of documentary filmmaking: [Subjects] can let you into their world, and you want to treat them fairly. I knew that Speedo and I had a very collaborative relationship, and he trusted me, and I wanted to not betray his trust. In the end, that has to be judged by the audience.

AC: It seems that doc-savvy audiences, or even demo fans, might be pretty skeptical coming in. Was that something you were proactively conscious of in shooting and editing the film? Was it something you structured against?

JM: I knew for the film to work, for people to be able to watch Speedo for 80 minutes, you had to keep revealing a different dimension of his character, a different side of him. I have those feelings, too, when I go to see documentaries. Here's a film about street kids or a film about a family of freaks, you know? I don't know if you've seen My Flesh and Blood ----

JM: It's a great film, but I think I went into it feeling very skeptical. Is this going to trade on the worst sensational and exploitative imagery? Capturing the Friedmans, right? So many documentaries work that way. My film is a little different than that, because the kind of film that I like to make is about one person, one character, and I like to get inside their life. Sure, Speedo has kind of a strange obsession. But it's not sex, and it's not murder, and I think that any time you get away from those two subjects in documentary, you're starting at a disadvantage. ... There are moments in the film where we laugh at Speedo, not only with him, but at him, or laugh at his friends, and I think there are probably a few scenes in the film that make people uncomfortable. But I don't think that's wrong. I don't think that's bad.

AC: How much did Speedo's family troubles sustain the film for you as the filmmaker, and how awkward was it being there to witness them? Did you feel at any point that you were treading into exploitation in that sense?

JM: Halfway through making this, I hadn't come to fully understand how important the family story was. ... I knew that there were tensions between he and his wife, Linda. I think that's very clear in that scene where you see them in the kitchen together, and she could just give a shit about the track and demolition derby. ... When they get in that major fight, they're in the process of getting a divorce: Speedo's just sold the house. [That scene] was an accident in the way that most surprising documentary scenes are. He was wearing a wireless microphone -- he always was when I was filming him -- and he went back into the house for something. I just heard it on the headphones, and I filmed it. I couldn't obviously go inside the house, but I was witness to a scene that was so awkward and excruciating that I really wanted to turn away, to turn the camera off. It was probably easier for me that I was outside. What was so tough about the scene for me is that I knew these kids were in the car waiting for their dad, and they couldn't hear what was going on. That really reminded me of being 5 -- my parents divorced when I was 5 -- and hearing my parents screaming at each other. As voyeuristic as the scene is, it's also very honest because it was important to let her say what she felt to Speedo even though we can't see her say it. It's not exploitative, because it works essentially with the other scenes that I like most in the film -- Speedo and Anthony helping each other get dressed for the banquet, for instance -- where the camera is the most transparent, where the intimacy between he and his sons is so touching. ... For all the times that Speedo behaved badly or crudely or obnoxiously or how he and Linda were together, to see how much he cared about his boys was something that allowed me to keep making the film. He's a man of such huge contradictions, and he's just trying to figure things out like everyone else.