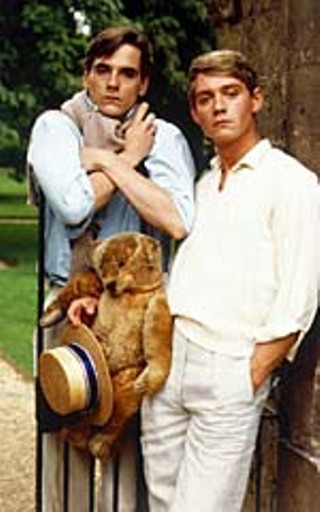 Before TiVo, viewers would have to gather 'round the TV in real time to see what happened next to Jeremy Irons (l), Anthony Andrews, and their teddy bear (center) in Brideshead Revisited. The Trio network revisits the miniseries classics next week.

Trio, the cable network dedicated to pop, culture, and TV, is showcasing one of the grand old traditions of network television next week: the TV miniseries. The epic form not only reignited the small screen, but in its heyday caused a public excitement that seems laughable today. Rushing home to see a TV movie is absurd now that VCRs, DVRs, and TiVos are staples in many American homes.

Thanksgiving weekend, Trio offers a look at some of the most influential TV miniseries, along with some background on what made them milestones, in "Epic TV: The Top Ten Miniseries of All Time." Mentioned are many of the usual suspects: Roots, Lonesome Dove, Holocaust, From the Earth to the Moon, and several that were less creatively memorable, but nevertheless true TV events in their day, such as 1983's The Day After (Testament, a small independent film starring Jane Alexander and William Devane released the same year, was a much more searing "what if" story of a nuclear holocaust in modern-day San Francisco).

A "blue ribbon panel" of TV execs, critics, producers, directors, and actors were asked to select and rank the Top 10 miniseries of all time. The titles include: Brideshead Revisited; From the Earth to the Moon; Holocaust; Lonesome Dove; Rich Man, Poor Man; Roots; Shogun; Tales of the City; and The Thorn Birds.

Shogun (1980): Richard Chamberlain stars as a 17th-century navigator shipwrecked off the coast of Japan. Based on James Clavell's bestselling novel. Airs Wednesday, Nov. 26, at 8pm.

Holocaust (1978): Michael Moriarty, Rosemary Harris, Meryl Streep, and James Woods star in one of the first films to address the human drama of Hitler's reign in Nazi Germany. The film made Streep and Woods household names. Airs Thursday, Nov. 27, at 7pm.

Austin City Limits received the National Medal of Arts from the National Endowment for the Arts at a ceremony held Nov. 12 at the White House. President Bush was on hand to present the award to the locally produced series, the first and only television program to receive the award. Austin City Limits is produced by local PBS affiliate KLRU and airs Saturdays at 7pm, with periodic encores throughout the week. (See also this week's "TCB," p.63.)

I thought National Lampoon's Thanksgiving Reunion would be something more than a few weak laughs based on flatulence jokes and a bad haircut. With a cast featuring Judge Reinhold (Beverly Hills Cop), Penelope Ann Miller (A Minute With Stan Hooper), and Bryan Cranston (Malcolm in the Middle), you'd think there would be some real yuks. Unfortunately, National Lampoon's Thanksgiving Reunion is as disappointing as a tofurkey.

The story is straightforward enough. Reinhold plays Mitch Snider, a whiny anesthesiologist who's miffed that his peers don't treat him like a professional. At home, his family sees him as nothing more than a walking checkbook. When cousin Woodrow (Cranston) invites Mitch and his family to Thanksgiving dinner, Mitch's spirits are lifted. He loads his reluctant family into their SUV for the road trip, taking along an elderly neighbor who provides the aforementioned flatulence jokes. When the two Snider families meet, it's a clash of cultures between the affluent, big-city Sniders and the small-town, appliances-in-the-front-yard pseudo hippies of Woodrow's clan.

Mitch's family is anxious for Thanksgiving to come and go so they can return to a cell phone service area, video games, and Prada. But Woodrow has other plans. This is where the "irreverent comedy" is supposed to take off. There are plenty of plot twists and turns, "surprise" revelations, and a moment of truth when Mitch gets to save someone's life like a real doctor. And maybe all of this would be a fun jaunt were every milestone not so transparent or forced. The "God bless us, everyone" moment is a welcome relief, because you know the movie is finally ending.