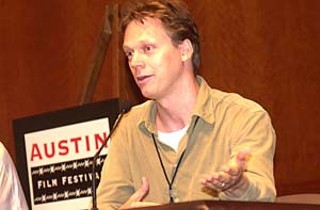 You may not recall Peter Hedges' name, but you've almost certainly heard of his work. He penned the screenplay for his first novel, What's Eating Gilbert Grape, for director Lasse Hallström, netting an Oscar nomination for Leonardo DiCaprio in the process. He also adapted Jane Hamilton's novel A Map of the World for director Scott Elliott, as well as Nick Hornby's About a Boy for Chris and Paul Weitz, which earned him an Academy Award nomination for Best Adapted Screenplay. In the midst of all this, he also found time for a second, critically acclaimed novel, An Ocean in Iowa, and is just now releasing his directorial debut, Pieces of April, a small, intimate, and digitally shot tale of a young girl (played by Katie Holmes) who seeks to reconcile with her estranged family over a disastrous Thanksgiving meal.

Although Hedges had never been behind a camera before, the finished film, with funding from the all-digital production company InDigEnt, crackles with the sort of dark, personal, and aggrieved humor you'd likely encounter if John Cassavetes were still alive and making movies. For a first film from an unproven director, it's a small gem, with powerful performances from not only Holmes, but also Oliver Platt and Patricia Clarkson as April's long-suffering father and mother. Coming off of a summer film season dominated by blockbuster sequels, Hedges' film is like a breath of fresh air in the midst of a cow field, and it manages the treacherous line between comedy and drama with a finesse rarely found in fledgling filmmakers.

We spoke to Hedges about his film and work during and after his recent trip to town for the Austin Film Festival.

Austin Chronicle: How has the reaction to the film tour been?

Peter Hedges: Since Austin I've been in Phoenix, Seattle, and Denver, with Detroit tomorrow. I feel like a rock star without the groupies, without the fans, and without the anonymous sex. The reaction's been great, though. Look, this movie isn't for everybody, but it seems to be for a lot of people. And I get to have these conversations with the audience after the movie. I'm liking it. I'm really trying to make sure I enjoy this, because in another week the reviews are going to start coming out, and I think we'll do fine, but invariably there will be some mean ones.

AC: Do you pay much attention to your reviews?

PH: Between the theatre work and the books, I've been reviewed quite a bit in my career, but I think this is going to be a different level, and now that the Internet exists ... all sorts of people write reviews, and I have no idea who they are. ... I would say that I'm entering a place where I think I will stop reading reviews. What I'll probably do is wait until it's all over and they can collect everything that's come out and I can sit down one day and read it all at once. I think it's good to read them all; if you're going to read the good ones, then you've got to read the bad ones, too.

My only problem with a bad review at this point -- and this is different from when I was reviewed earlier in my career, when I would read a review to try and get a clear opinion of my work -- is that on this one I already know exactly how I feel. When I read a bad review I try to imagine the person who will never see the movie because they've read that particular review. That's what's sad about it. I just want people to see the movie.

AC: How did you prepare to make the leap from writing to directing? Did you have any previous experience with the craft and logistics of making a feature film?

PH: No, not at all. What I brought was my experience with actors and having directed my own plays, and what I thought was a script that was ready to be shot. When I did Gilbert Grape, Lasse Hallström let me be on the set with him and in the editing room and in the casting sessions and so on. And so I got a firsthand, rather intimate, high-pressure look at how to make a film. I've watched other scripts I've written get made into films, too. I could see what sometimes is required to move from the page to the screen. I talked to my director friends about how they approached the process. Any kind of preparation I put into it, however, got pretty much altered when we went to a 16-day shoot, which was much shorter in duration than we had planned on. We ended up shooting the film in the most economical way with the most alacrity, as fast as we could.

AC: Writing novels is such a solitary art, obviously much more so than the collaborative medium of filmmaking. Was that a hurdle for you, or did you appreciate the company?

PH: It was a welcome change to be making something with people, as opposed to making something alone. It was really time for me to do it. And now that I'm on the film tour, I'm beginning to think it's really time for me to be back in my room for a few months, doing my writing. But I have a feeling that my future will encompass those two types of living, the quiet writing time and the much more social, much more political act of making a movie. It was really welcome, though; I've spent too many years just writing, and so I was a bit overzealous and eager to have other people around. I was like someone who planned a party and thought no one would come. When they showed up, I practically wept. I ended up offering anything I could to make them more comfortable. I suspect there were times when they thought I could be a little cooler about it all, but, as you know, I'm not very cool.

AC: Pieces of April has a terrific soundtrack by Stephin Merritt of the Magnetic Fields and the 6ths -- how did your association with him come about?

PH: Basically what happened was that I wanted the movie to feel like life, and so I wasn't going to score the movie because I have this pet peeve that most American movies are over-scored with the music always telling you how to feel in case you're not figuring it out on your own. So I was going to use the Three Dog Night song "Pieces of April." When we cut the movie, we used that in the very first versions, and it seemed to work quiet well. My producer, however, began to get sick of the song and felt that it was a bit cloying, so he urged me to have something written that would not be a song anyone had ever heard before. I resisted this, because I knew that this was his covert way of getting me to score the movie. He finally got me by using the argument that we could always go back to using the Three Dog Night song, so why not explore other music to see if any of it works? So I said I'd try. I met with various composers, and I liked them all, but then one day I thought, well, why not just ask my favorite musician in the world, who I don't even know, which was Stephin Merritt. So he came in and watched the movie, said he enjoyed it, but that he hated the use of "Pieces of April" at the end. He told me he heard a Zimbabwean love song when he was watching it, and not Three Dog Night. I told him I had no idea what he was talking about, but that I would love for him to do the movie, and luckily he said yes. I immediately had buyer's remorse because I thought, you know, what was I doing? I don't want a Zimbabwean love song in my movie no matter how good it is. The next thing I knew he came back with this song he'd written on a ukulele, called "One April Day," and he played if for me, and it was just exquisite. So we ended up scoring five movements leading up to the final musical theme, each employing a different instrument with all five instruments coming together in the end. And, of course, Stephin's finished score is just pure genius. I still can't believe that he wrote the music for my movie.

PH: Yes, sure. I completely hold on to the idea that people are eager if not desperate to be told a good story. And, you know, my job is to figure out the kinds of stories I can tell well. And for better or worse, a story like Pieces of April is the kind of story I'm supposed to tell. The kind of story that makes you laugh as much as possible but also breaks your heart.

Pieces of April opens in Austin on Friday, Nov. 7. For review and showtimes, see Film listings.