Let the Work Speak for Itself 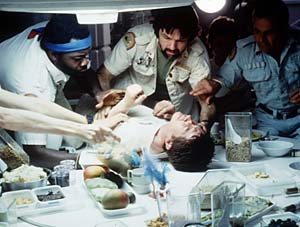 Yaphet Kotto has had the kind of career that must make other actors envious. His roles are as diverse as they are prolific, and not only is he recognized for the quality and breadth of his work but also his unwillingness to succumb to the dictates of racial stereotyping in popular culture. Although today moviegoers might recognize him most readily from his towering role as Lt. Giardello on TV's Homicide, Kotto has been making popular breakthroughs since he began working steadily in movies and TV in the Sixties. Appearing on TV shows from The Big Valley to Michael Moore's TV Nation, Kotto also made waves with his first film, Nothing but a Man, and then continued to chart an unpredictable path in such movies as Paul Schrader's Blue Collar (with co-stars Richard Pryor and Harvey Keitel) and Ridley Scott's Alien, as well as Across 110th Street, Live and Let Die, Brubaker, and Midnight Run. On the occasion of the release this week of Alien: The Director's Cut, we spoke by phone with Kotto from his home in New York.

Austin Chronicle: How did your casting in Alien come about?

Yaphet Kotto: I really think that Blue Collar was responsible for me being selected for Alien. It happened so quickly. I got the script in the mail, and it came at a time when I had two other projects to make a decision about, and one of those projects was a firm offer for a great deal of money, and a friend of mine was directing it -- Stuart Rosenberg. He called me directly at home and said "C'mon I want you to do this. I'm going to send it to you. Blah, blah, blah." I said, "Stuart, I really can't do this movie." He asked, "Why?" I said, "Because I've got a script that I really love." "Do they want you?" I said, "I don't know," but I still had to let him go. So I waited four months for this offer -- and it came through.

AC: So you knew when you read the script that Alien was something really special.

YK: Instantly. I knew that it would be a hit. I knew that it would be a classic. It was a first, this movie. I was always looking out for a first, and I saw that this character, Parker, was the first African-American who was going to be in space. What completely shocked me and surprised me though was the character of Ripley (Sigourney Weaver). Whoa, this was history. "I've got to be in this one," I said. "No, I'll wait. I'll wait and I'll wait and I'll wait -- and I'll keep on waiting until they are ready to go, and then I'll go and force my way into this movie. I've got to be a part of this." I turned down everything. I waited for four months, and around December I got a call from Fox, saying they wanted to talk to me about Alien. And when I went over there, they offered me the part as soon as I walked in the door.

AC: So, you're always looking for something distinctive in a script?

YK: Always. As a result, the movies I've done are made of a whole field of black character actors. I mean, there's The Liberation of L.B. Jones, which completely changes the character of the black male on the screen in America. And Live and Let Die, which also changes the image of black men in America. I've also done a lot of TV, not to mention the fact that I've done lots of plays. I look at my history and say, "What the hell were you thinking about? Why were you so desperate to play all these roles? What were you doing? Sixty movies, 30 television shows, what is it with you, man?" I don't know. I just wanted to work.

Not many people realize that I was a part of the old Hollywood machine. I mean, William Wyler directed The Liberation of L.B. Jones. Henry Hathaway directed 5 Card Stud. Judy Holliday used to help me. Barbara Stanwyck was like my unofficial manager. All these people. I worked with Edward G. Robinson and Robert Mitchum. I came out of this Hollywood system of the studio, and I've got to tell you that anyone who comes out of the Hollywood studio system is going to work, and they're going to know what they're doing. The system died. It's gone now, but I benefited by that experience and those relationships.

AC: You must regret getting killed off in Alien, considering all the sequels.

YK: No, not really. You know, I was offered to do the part of Lando Calrissian in The Empire Strikes Back one afternoon in the luncheonette by Irvin Kershner, who had just finished directing me in Raid on Entebbe. He was directing Empire. I was having lunch with Veronica Cartwright, and he came over and asked me if I wanted to do the part, and I said no. He asked why, and I said, "Because they'll kill me off. I'll have trouble finding work after that." I said, "I've got something I want to do called Brubaker in Ohio. That's where I'm going after the movie is over." I knew I had to get back down to Earth.

I knew then not to do the same thing twice. Stick to the story. Stick to the scripts that are good. Plus, I had this wonderful relationship with Barbara Stanwyck and Mary Astor. Both those ladies were constantly on the phone ragging me. Mary would call and say, "You weren't acting. I don't know what you call that, but that wasn't acting." And they would tell me all the time what to do and what not to do. One would call me from the nursing home, and the other would call me from L.A. Plus, Judy Holliday. Three women helped my career. Judy Holliday produced a play I did in Cape Cod, Othello, when I was 19 years old. Barbara Stanwyck was my guru. I did Big Valley with her, and she took over my life. Brother, every move I made, she was following me. And I had Mary Astor calling me from the old-age home, ragging my ass all the time.

Stanwyck would tell me, "Don't get a publicist. The work will speak for itself." And I used to wonder. I used to sit at home and watch people going on TV and being awarded and saluted and walking down carpets and going on late-night television shows. And I'd say, "Why don't I just get a press agent?" And then I'd hear that voice say, "Let the work speak for itself." But now, as I'm older, and I look back, they're right. Everything has caught up with me, and the work is speaking for itself.