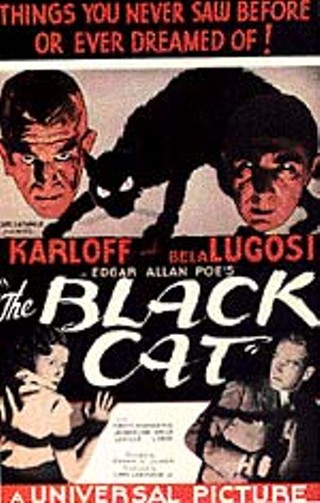 This was the first of seven pairings for Karloff and Lugosi, and, for our money, the best. Ulmer strip-mined the German expressionists (including his former boss, F.W. Murnau, of Nosferatu fame) for his neo-Gothic sets and placed Karloff's satanist Poelzig and Lugosi's psychiatrist Werdegast squarely against each other in a windswept Hungarian castle that resembles nothing so much as a modernist art deco asylum for upscale crazies. Lugosi's felinophobia is the single nod to the Edgar Allan Poe short story -- Ulmer instead creates a literal game of death (via chess) between the two horror icons with the life of a young girl at stake. Complete with scenes and talk of black masses, orgies, sadism, and incest, The Black Cat is daringly perverse for a film produced under the then recently enacted Hollywood production code, which expressly forbade just that sort of risqué brouhaha. It's the shocking, geometric sets, however, and the streamlined brilliance of Karloff's and Lugosi's warped characterizations that stick in your mind long after the final jagged lightning bolt strobes across the castle face. -- Marc Savlov

Yankee ingenue Harper arrives at an elite ballet academy just in time for all hell to break loose: mysterious deaths, maggots falling from the ceiling, and a grisly end for prolific oddball Kier. Does unspeakable evil lurk behind the walls? You betcha. Heavy on atmosphere -- the color palette is luridly beautiful and the freaky-deaky Goblins score will nail you to the wall -- there's no shortage of Hitchcockian thrills 'n' chills, either. I love the knockout chase scene in the second act. -- Marrit Ingman

A cheerful French travel plaza beckons a road-weary vacationing couple. He returns to the car after freshening up. She doesn't. From these unassuming beginnings Sluizer's sophisticated thriller evolves into an exploration of obsessions: the man's obsession with his lost girlfriend and the obsessions inside the mind of her captor. There's no gore on the screen, but the ending is as terrifying as anything you'll see. Skip Sluizer's American remake, as well as the derivative Breakdown. -- M.I.

Before accessorizing torn fishnets and Bauhaus mix tapes with big black hearses became trendy, joyriding hippies in death mobiles were a tad eerie. When the characters of John Hancock's 1971 Let's Scare Jessica to Death gas guzzle into town, surreal and concrete intertwine with stylish suggestion long ago abandoned for butcher-shop barbarism. Jessica's torture begins playfully in a cemetery, where she and her friends have a gay old time making headstone rubbings. But Jessica, fresh from her stint at a mental institution, knows all graveyard fun must end. Yep, she thinks she sees dead people. Paranoia strikes deep. Perhaps the sanguine complexion of the redheaded nymph squatting in her farmhouse isn't anything, and Jessica's just another kook with the post-loony-bin blues. Unsuspecting half-dressed virgins aren't the main attractions here, but you'll begin to wonder if it's ever a nice day for a white wedding. -- Courtney Fitzgerald

Originally served in 1963, Blood Feast was the first of its kind, an inexpensive menu full of offal carnage. Catering means one thing to Fuad Ramses: a cataclysmic cannibal bloodbath to resurrect Egypto-Goddess Ishtar! Let the feast begin!

Drenched in delicious Blood Color, Feast still sticks to the ribs, like some cannibalistic comfort food. Can the same be said of rustic cousin, All U Can Eat, simmering for some 30 years? The menu:

The versed goremet tastes puff-pastry on this two-disc course, yet the main dish is so bloodily gluttonous, you may swear off sweetbreads altogether. While Lewis has been out of the kitchen for years, he didn't forget the recipe he created and inspired countless others with. Bone appetit! -- Wells Dunbar

A friendly reminder to those burying elders: Don't lay Grandpa to rest in the space-saving "dragonfly" position. He won't stay dead. This wacky Hong Kong horror-comedy is instructive for Chinese mythology neophytes (stick a Taoist charm on a vampire's head to make it hold still!) but has everything fanboys require: undead babes, supernatural comic mayhem, and the late Mr. Lam in his signature role as the "one-eyebrow priest" who fights evil with wit and mad kung fu. -- M.I.

It might be the most famous one, but The Exorcist isn't the last word in Catholic-themed horror movies. Slightly more subtle is this low-budget thriller from 1976, starring Tony Lo Bianco as devout Detective Peter Nicholas investigating a series of random shootings on the streets of New York. The murderers all offer the same explanation for the killings -- see the title -- and Detective Nicholas slowly finds himself questioning his sanity and faith as answers elude him. Despite a hilariously overblown orchestral soundtrack, and dialogue that occasionally reaches Wisconsin levels of cheesiness, this film will put the fear of God into you (particularly if you spent 12 years in Catholic school). It's also worth it to see everyone's favorite Taxi star in a brief role as a confused young killer. Andy, are you goofing on Charles Whitman? -- Michael Schaub

With its legion of long-haired, back-to-nature hippie-types ravenously intent on getting in touch with their inner witchery and sticking it to the man, this genuinely creepy film feels like an inspired riff on the annual Burning Man festival outside of Reno, Nev. It's not, though -- director Hardy lensed it on the Isle of Whithorn way back in '73, 13 years before San Franciscan Larry Harvey lit his first beachfront stick figure. It is, instead, one of the few horror films to inspire a looming sense of dread that lasts long after the movie has ended. As a British police officer sent from the mainland to uncover the whereabouts of a missing child on a pagan island, The Equalizer's Woodward is by turns baffled, hamstrung by the increasingly bizarre locals (including an excellent Christopher Lee), and ultimately way in over his traditionalistic C of E head. As a metaphor for clashes of class and culture in the UK, it's disarmingly forthright; as a horror film, it's unforgettable; as a vehicle for Ekland's disrobed and dancing posterior, it's sublime. -- Marc Savlov

When British children speak, something feels terribly wrong. Winston Churchill in OshKosh B'Gosh isn't exactly comforting. Miles and Flora, the rugrats in Jack Clayton's 1961 The Innocents, might as well wear smoking jackets and drink scotch, they're so terrifyingly precocious. Truman Capote's screen adaptation of Henry James' The Turn of the Screw tracks governess Giddons' (Kerr) haunting suspicions about her new articulate clients. She suspects the children's clever ways with words could be explained by lingering presences in the Bly House. Enhanced by Freddie Francis' tantalizing cinematography, the terrifying charm of The Innocents lies in its ambiguity and confused eroticism. Who does Miss Giddons really snog like a star-crossed Mrs. Robinson? You won't find Nicole Kidman planting one of these wet puzzlers in The Others, if that's what you're thinking. -- C.F.

One of the most unjustly overlooked indie movies of the past five years, The Corndog Man might also be the creepiest film ever made about a sadistic purveyor of unhealthy pork products. Willingham (of Walker, Texas Ranger fame) plays Ace Barker, a blustering, racist boat salesman ("You'd drown a bag full of kittens to get one of my deals!") beset day and night by a series of increasingly harassing telephone calls. It's a gas to watch Willingham's salesman spiral out of control until the film's terrifying conclusion. The film is so unsettling, it might turn you off corndogs forever -- and despite Willingham's utterly brilliant performance, that might be the best reason imaginable to seek out this buried treasure. -- Michael Schaub

Like Friday the 13th? Then check out its inspiration. Bay (also known as Twitch of the Death Nerve) has the same despicable characters who get what they deserve, tranquil lakeside setting, gory -- but creative -- killings, and twist ending. Hippies cavort shamelessly and skinny-dip, scheming relatives plot against each other for waterfront property, and there's a groovy disco scene. Italian director Bava essentially created the slasher film with this project; his previous work tended toward supernatural Gothics (Black Sunday) and the giallo, or horror-thriller. -- M.I. 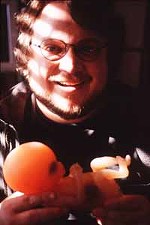 Scary Stories for the Thinking Man
Director Guillermo del Toro on love, pulp, and the politics of horror 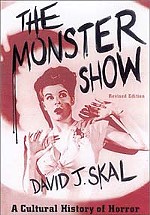 The Monster Show: A Cultural History of Horror
Far more readable than the majority of critical studies of pop-culture grue, David Skal's The Monster Show is a landmark work and nearly as entertaining as that dead clown underneath your bed.

The Black Cat, The Vanishing, Suspiria, Bay of Blood, The Corndog Man, Let's Scare Jessica to Death, The Wicker Man, Blood Feast, Blood Feast 2: All U Can Eat, God Told Me To, The Innocents, Mr. Vampire, horror movies, horror videos