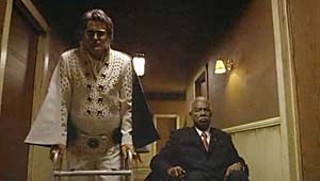 That's just fitting, somehow. Clambake it ain't, but with cult favorite director Don Coscarelli (creator of the Phantasm series) at the helm, Lansdale's bizarre meditation on aging and identity, rock & roll, and eternal evil has made the leap from page to screen with the author's uniquely warped vision and seriously twisted tone intact, a fact that both Lansdale and Coscarelli are immensely pleased with. They're not the only ones: Coscarelli picked up the Best Screenplay award at the recent HBO U.S. Comedy Arts Festival in Aspen, and star Campbell (Evil Dead's Ash) walked away with the Best Actor statuette.

Adapting a written work for the screen can be problematic at the best of times -- Spike Jonze's recent Adaptation, which chronicled screenwriter Charlie Kaufman's frustrating and finally disastrous attempts to bring Susan Orlean's nonfiction novel The Orchid Thief to the screen, appears to be more the rule than the exception -- and when it comes to translating the atmospheric and often deeply internalized fiction of such genre writers as Stephen King or Dean Koontz to the silver screen, the results are often painfully inept or just plain lousy. For every Stand by Me, there are a dozen The Lawnmower Mans; for every Shawshank Redemption, a fistful of The Langoliers.

So it bears noting that Bubba Ho-Tep, which arrives after some 20-odd other attempts to bring Lansdale's work to the screen, all of which fell apart for one reason or another, is something of a minor miracle (albeit a nasty, violent, and oddly touching one) -- a film adaptation that both director and writer agree actually works just as fine in the theatre as it does on the page.

"I started adapting Bubba Ho-Tep about six years ago," says Coscarelli from his home in Los Angeles. The director had fallen in love with Lansdale's writing in the mid-Eighties, and had previously optioned a couple of the author's stories -- the zombie Western Dead in the West among them -- but had been unable to raise the necessary financial backing to bring them to fruition. It was Bubba Ho-Tep's relatively short length and practical setting (nearly all of the action takes place within the dingy confines of an East Texas old folks home) that proved to be the deciding factor in the film's eventual green lighting.

"The things I grappled with in the first couple of years," continues Coscarelli, "even before the script was done, were two concepts integral to the story. Number one was the subject matter of the character of Elvis having cancer on his penis. I thought I had to somehow eliminate that to make the subject more palatable, but at the same time it was a key component of the story. ... It's amazed me how much audiences have accepted that, because I really thought that that opening line -- where Elvis is discussing his cancerous penis in no uncertain terms -- would completely turn off the audience. But I guess the way it's been presented, in a humorous way, the audience can deal with it."

Metastasizing tallywhackers aside, Lansdale remains thoroughly impressed with the result. Coscarelli kept in touch with the author during the six years it took to see the film through to completion, although both men agree that Lansdale's direct input on the finished script was minimal, consisting of the director routinely sending the author copies of the various drafts and occasional "what if?" scenarios being batted back and forth via phone conversations and the occasional e-mail. The actual adapted script, by all accounts, is all Coscarelli, who notes that the process of writing the film was aided immensely by Lansdale's cinematic writing style (he refers to the original story as his "bible"), although he notes that he was concerned about making the film relevant to a more youthful audience. There's precious few mall rats queuing up for action films set in rest homes these days, after all.

"Yeah, the one thing I was hung up on for a couple of years, and this was really solved by the casting," says Coscarelli, "was that essentially Joe's short story called for us to be making a 90-minute movie about old people in an old folks home, and how on earth could I make that relevant to a contemporary audience, and by that I mean a younger audience? Would the audience want to watch two old men the whole time? I kept thinking that I needed to add some sort of young character into the mix. As it turned out I never was able to figure out how to do that, and I think the problem took care of itself once we cast Bruce Campbell -- even though he's playing a 70-year-old guy, I think he brings a certain youthful feel to the role."

There's plenty that's remarkable about the finished film, not least of which is the casting of legendary actor and civil rights activist Ossie Davis in the role of a crotchety head case who believes he's JFK -- Coscarelli says that Davis was his choice right from the beginning, and although the actor's agent just "didn't get" the script, Davis himself loved it and accepted a scaled-back fee to work in the relatively low-budget production. Both Coscarelli and Lansdale also realized that the signing of Campbell, a cult actor of equally legendary status in certain circles, would be a tremendous boon to the film. Campbell's work on television's Xena: Warrior Princess and the late, lamented series The Adventures of Brisco County Jr. (which in fact bore no small relation to Joe Lansdale's own forays into the weird Western realm), brought him into contact with a more sizable section of viewers than his work on Sam Raimi's Evil Dead trilogy ever could, and the resulting exposure has since increased his rabid fan base a thousandfold or more. That could only help things in the case of Bubba Ho-Tep.

Ultimately, though, the process of birthing Bubba Ho-Tep for the screen was the proverbial labor of love (and guts) for both men. "How long did it take?" asks Coscarelli. "It took the full six years. The thing that I've never understood about writing and directing is this: I don't know how somebody can just 'direct' a movie, as opposed to writing it or adapting it. Even the editing process is very similar to 'writing with pictures,' you know? You're basically 'writing' the movie until the movie's locked, and it's done, and the music is finished.

"Joe's writing is so wonderful, his powers of description so fascinating, that I didn't want to lose all of his third-person description. There's whole chunks of Joe's novella that are intact in the film. People are always saying, 'Show it don't say it,' right? That's the rule you're supposed to live by if you're a filmmaker, and yet when you're working from great literary material, you want very much to keep saying it and saying it and saying it -- because it's written so well. That was a challenge throughout."

Back among the piney woods and bloody macadam of East Texas, Lansdale, who currently has a brace of other projects lined up with some impressive names at the helm -- his novel Cold in July has John Irvin attached, Ridley Scott has optioned The Big Blow, and a script for Mucho Mojo is being written by Silence of the Lambs scribe Ted Tally -- is clearly enthusiastic about Coscarelli's film version of his novella. It's not just that the project actually bore such fine fruit, although that's certainly part of it, but that the finished picture is, in nearly every regard, a "Joe Lansdale movie." An author's voice is often the most difficult thing to translate to the medium of film, and here Coscarelli has struck pay dirt. With its wise-cracking, cynical characters and over-the-top horror, Bubba Ho-Tep is 100-proof, grade-A Lansdale.

"I think about 90% of that novella is on the screen," he says. "It's a Lansdale story, I've got to admit. I had thought it might turn out nothing like my story, but I was wrong. And frankly, I just didn't think it'd ever get made. But Don fooled me. Don fooled everybody. Don's one of those guys who's like a bulldog: He gets on one of these things, and he just keeps chewing. He gets real tunnel vision on what he's doing, and he stays with it. And you've got to have that kind of mind-set to bring something like this to the screen."

Bubba Ho-Tep, which screened at South by Southwest 2003, opens in Austin on Friday, Oct. 24. For review and showtimes, see Film listings. 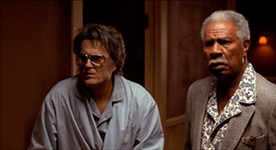 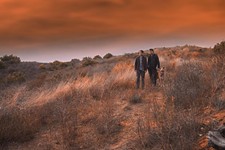 'John Dies at the End'
Daily reviews and interviews