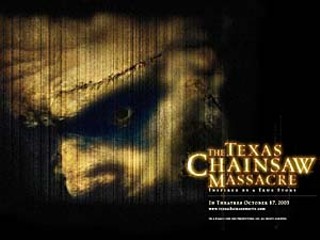 [Ed. note: The Seventies and Eighties saw the horror movie redefined yet again. Few other film genres are as equipped to deal with the unspoken, sometimes unacknowledged, yet ever-evolving concerns and fears of the modern world, related to but not specifically referencing current events, politics, history, as well as social and cultural problems. With a tip of the hat to the Forties horror films of Val Lewton -- as well as to Alfred Hitchcock's Psycho -- George Romero's Night of the Living Dead (1968), Tobe Hooper's The Texas Chain Saw Massacre (1974), John Carpenter's Halloween (1978), and Wes Craven's A Nightmare on Elm Street (1984) helped bring film into modern times, using style, cutting, and camera movement to create worlds in which the monsters looked just like us, and terror came not from the lab but from family and each other. The full imagination of cinematic vocabulary empowered these films, influencing not only the horror genre but Hollywood, independent, and international film. The Texas Chainsaw Massacre (2003), directed by Marcus Nispel, opens in Austin this Friday. Here, we present an essay on the original by Ed Lowry and Louis Black from CinemaTexas program notes (Vol. 13, No. 4, Dec. 7, 1977). For more information on CinemaTexas, see On Ondine on Film and The Eyes of CinemaTexas.]

Once it was monsters and now it is maniacs. Horror novels and films used to create terrifying images of our innermost fears. Vampires, the Frankenstein monster, werewolves, mummies, and zombies represented terrors that we were scared we might meet in the dark. ... People screamed and fainted and continued to go to the theatres. Part of the advertising campaign for the original FRANKENSTEIN (1931) announced that there would be a nurse in the lobby. Having oneself scared half to death can be a surprisingly pleasurable experience.

The society changed and the film form with it. There was World War II, the Nazis, and ovens with people mass-murdering other people. The ritualization of war that allowed us to cope with disguised genocide broke down and we were forced to confront a new kind of horror. ... At the first battle of Bull Run, the Washington, D.C., elite drove out from the city with picnic baskets to watch the anonymous boys in blue slaughter the anonymous boys in gray. But when the tables turned the elite hurried home. They didn't really want to be involved; they only wanted to watch. Film audiences are allowed such privileges.

We are the audience with those privileges, fascinated by watching humans slaughtering humans. We are the audience watching Alain Resnais' short NIGHT AND FOG about the Nazi concentration camps as he talks about modern day tourists posing in the doorways of the ovens to have their photographs taken. It is Bermuda shorts, straw hats and Nikons and corpses, blood and mountains of hair and teeth. ... The War ended and the Cold War began. [The Bomb, weapons of mass destruction, nuclear power -- the horror was now from science.] Hollywood made many science-fiction films but not many horror films.

In 1960 Alfred Hitchcock made PSYCHO and the monster this time looked like you and me. The terror came at a typically American motel, and the car, clothes, and people were not alien but very real. PSYCHO pointed the way. There were still movies with monsters and movies celebrating the grotesque and the unreal, but the horrors in society were changing. Charles Whitman, Richard Speck, Charlie Manson, and others became famous. But they were just the very visible tip of an iceberg that seemed to keep growing: anonymous brothers who murdered sisters, children who murdered their families, handymen who killed their employers, people who slaughtered people they never met. The real horror has now become that some night your next door neighbor might knock on your door and, when you answer it, blow your head off. The real horror is that, when walking to class or driving to work or watching a football game or picnicking in the countryside, someone may murder you. The real horror is snipers with guns, maniacs with knives, and lunatics with bombs -- normal-appearing people who suddenly turn deadly.

CHAIN SAW undoubtedly offers one of the most intense and physically exhausting movie experiences available. There is a relentlessness to its pacing, its unendurably protracted scenes of horror, and its intolerably mounting suspense which has less to do with entertainment than with catharsis, and less to do with catharsis than with pain. It is a film which generates horror, not through the liberation of demons from the psyche, but by confronting directly the reality of human pain. Not only are we forced to contemplate the horror of being held captive by a group of crazies who intend to torture you to death or the feeling of being skewered alive on a massive meat hook; we are also forced to face the pain of frustration (Franklin left downstairs by his sister and friends), of annoyance and hostility (the argument between Sally and Franklin), of being confined to a wheelchair, of enduring the oppressive Texas summer heat.

The universe of TEXAS CHAIN SAW MASSACRE is unrelentingly hostile. "The world has gone crazy," one of the victims observes early in the film, and we are constantly reminded that the chain saw massacre is neither isolated nor comprehensible. Following the report of grave robbing, the radio continues to drone on during the credits, reporting on the deaths of 29 people in the collapse of a building in Atlanta, 14 cases of an infectious and fatal disease in San Francisco, the explosion of three storage tanks at a Texas refinery, a suicide in Houston, as if all these events somehow were linked in a cosmic scheme to torment mankind.

Is there some grand explanation? The film itself seems to ridicule such an idea by making fun of Pam, the girl who is "into" astrology, as she searches for reasons in the fact that Saturn is retrograde. At the same time, however, CHAIN SAW establishes its own cosmic context, constantly connecting scenes with shots of the sun or moon and projecting its opening credits across astronomical photographs of million-mile-long flames leaping from the sun's surface. By connecting the world's real social and physical brutalities with the conventional signifiers of nature that contribute the metaphysical dimension to the standard horror film (a hazy sun, the full moon, a dark forest), CHAIN SAW implicates the entire universe in its path.

Are the killers crazy because their father is crazy? And is their father crazy because his father worked in a slaughterhouse? Are we all crazy because we eat meat? Do buildings collapse in Atlanta because graves are dug up in Texas? Or is the world in general crazy due to the total arbitrariness of the universe? Is pain the human condition? And, if so, what kind of a universe is this which torments us without reason? Is God the ultimate sadist?

For an extended version of this piece, see Unrelentingly Hostile: Editor's Cut. 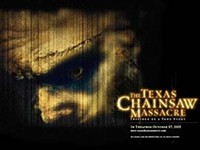