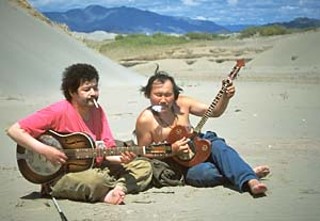 Readers, this Doc Tour screening of the Academy Award-nominated Genghis Blues (1999) presents not one, but two truly swell stories: the one in the film, and the one about the film told by filmmaker Adrian Belic. (Belic and his brother Roko are the self-dubbed "Genghis Blues Brothers.") Both stories are unpretentious, earnest, and, um, positively inspirational. Here's the Reader's Digest version of the film, whose dark horse triumph at Sundance in 1999 sucked two rookie filmmakers into the vortex of the international festival circuit and deposited them on the Academy's short list: While surfing his shortwave radio, a blind, black San Francisco blues musician of some note discovers throatsinging (exactly what its name suggests) coming from the tiny Autonomous Republic of Tuva, wedged between Siberia and Mongolia. Intrigued, he teaches himself how to throatsing and then chances to meet a Tuvan throatsinging star on tour in the U.S. and impresses him with his mastery of the form. He gets invited to Tuva for the next throatsinging competition. We follow him on this journey, our heartstrings, like those of audiences everywhere, duly tugged.

That's the film's story: Go see it. The film's backstory is a terrific "when good things happen to nice guys with a three-chip camcorder" or "follow your bliss, and the rest will fall into your lap" tale. A heads-up for the aspiring filmmaker. A story about two Chicago boys of Czech and Yugoslavian parentage, whose love of travel, storytelling, and the simple goal of "having a kickass, adventurous life and meeting cool people" were largely shaped by a steady diet of PBS travel programming (the channel-changing knob on the family TV broke, and mom seized the opportunity and a wrench to effect a permanent PBS setting) and annual summerlong trips hanging with family in what were then Iron Curtain countries.

Austin Chronicle: So, back in 1993 you and Roko are out of college, each with degrees having nothing to do with film. You have no jobs, and you've never made a professional film before. How do you end up making a movie in the Autonomous Republic of Tuva?

Adrian Belic: Way back when we were in high school, we saw this PBS documentary about the physicist Richard Feynman and his attempt to get to a place called Tuva. Now, in our family, we did a lot of traveling and spent a lot of time looking at maps and globes, but we'd never heard of Tuva -- which meant that we absolutely had to go there one day. So, when we got out of college, we started researching Tuva but couldn't find anything. We decided to look up Ralph Leighton, the guy who did the Feynman documentary. To our amazement, he picked up the phone and chatted with us for an hour about yurts and yaks and shamans and throatsinging and a land surrounded by snow-capped mountains that's rarely ever visited. Doesn't that get you excited? We thought, this is too cool!

Then he told us something that would change our lives: He told us about Paul Peña, the blind, black blues musician who, it just so happens, was going to Tuva next year for this throatsinging festival that happens once every three years. We immediately saw this as our ticket to legitimacy and wanted to do a film, but it turned out that the BBC had first dibs on the project. Luckily, a few months later, the BBC pulled out; we talked to Paul Peña, and we were on course.

One problem: We had no money and no one would give us any. We wrote grant applications, but foundations thought they were college pranks: Tuva doesn't exist on a map; how do you explain throatsinging? Who the hell is Paul Peña, and who the hell were we? We never went to film school. And besides, who would want to watch this thing if it ever got made? So we just booked two seats to Moscow on Aeroflot, maxed out our credit cards, packed our videocameras -- an old Hi-8 and a new three-chip Hi-8 -- and flew with the motley crew that came together at the last minute. Another flight and a Russian Jeep ride through the mountains, and we were in Tuva.

When we came back, we knew we had cool footage, but the question remained: Could we put it together in a compelling way for someone who wasn't there with us? Naturally, we had no money for postproduction and no income.

Then, we chanced to meet this guy, Buff Leboeuf, who had a state-of-the-art corporate editing facility in San Francisco. He liked us and our project and offered to let us edit our film nights and weekends for free at his place. For the next two years, our daily routine went like this: We'd start editing at 6pm -- when Buff's office closed -- and at around 1 or 2am, I'd go home to sleep while Roko would continue editing until 6am. He and I would meet for breakfast at 7am, and then Roko would go home to sleep while I would hustle all day running errands for the film. We lived above an autobody shop in a dump for $500 a month. We practically lived on a burrito a day; we would roller blade or bike to Buff's place. After a while, Buff noticed how we were getting by and started giving us odd jobs to do for him -- like trimming the new carpet in the facility -- so that after working for a few weeks, we could pay off our living expenses and then get back to the film. As we taught ourselves how to make our film, Buff would hire us to use those skills and teach us new skills so that we could fill in for his employees when he needed us. We finished the film three and a half years after we shot it.

AC: And then, to your amazement, you won the Audience award at Sundance, went on to take the Best of Festival at Rotterdam, and on to Berlin, where theatrical releases and distribution deals poured in. Then the call from the Academy.

AB: In February 2000, we were invited to bring the film to Mongolia, which, of course, we couldn't turn down, because we'd always wanted to go to Mongolia. A few hours after the screening, which drew a huge audience of Mongolians, including dignitaries and U.S. Embassy staff, we were sitting at a little restaurant, watching the Mongolians passing by in their traditional outfits, in 45 below zero weather -- and we get a call on our host's mobile phone from the friend who did all the legal work for the film. He's screaming, "You're nominated for the Academy Award!" We're thinking, this is all a dream, I'm sure we're going to wake up in a few moments, drooling on ourselves in front of the editing screen, saying, "I just had the coolest dream ever." Back at our hotel there are faxes and telexes from people saying, "Get your asses back to Hollywood, you need to do interviews." But we had planned to stay in Mongolia beyond the film festival, to travel around the Gobi desert for two weeks. So, while everyone was screaming at us to come back to Hollywood, we disappeared into the southern Gobi desert for six or seven days, staying in yurts with the natives. We figured, it's only February, the awards aren't till March -- they won't forget about us. Life is all about living your dream, and, frankly, at that point, the dream that we'd had for a long time was hanging out in the southern Gobi desert; we'd had no dream of going to the Academy Awards. So, it may seem illogical, but we refused to let our true long-term passion be superceded.

Even though we didn't get the Oscar, we were really in demand then. For the next year, we literally lived on planes; I could fly to Europe three or four times in two weeks. I never unpacked my bags. We got a big-time agent, the guy who represented the Hoop Dreams guys and most of whose clients are big Hollywood fiction film people but who really liked documentaries, too. At that time, we were interested in doing some fiction films because it would be fun and help us get out of debt and because all we care about is surrounding ourselves with really great people and having a great life.

So we started looking at the fiction film ideas that people were showing us, but none of it interested us: It was the same old Hollywood fare. Not that we thought we should be getting the best scripts, but, frankly, nothing interested us. I don't know how to say this without coming across as arrogant, but the reality was that we had done exactly what we wanted, exactly the way we wanted to do it, and done really well with it, even getting an Academy Award nomination. So, in a way, the idea of taking something just because someone gave it to us wasn't really our style. We were confident that our way was a good way.

In fact, that was how I found the documentary that I'm working on now. These guys showed up at a screening of Genghis Blues and loved it and why we did it, and told us this story of what they did -- traveling around to war zones all over the world delivering humanitarian aid. They were Vietnam vets and paratrooper medics, and they were sort of all-American, blue-collar types, so we took their story to our agent with the idea of making a fiction film. (He'd been telling us to go out and find something we liked, if we didn't like the stuff he was bringing us.) He told us to figure out how to turn these guys into characters for a fiction film. But the stories they told us were so incredible that we went back to our agent and told him we thought we'd have to do this, at least at first, as a documentary. Man, was he pissed: This was not the way to make the big bucks and turn clients into Hollywood filmmakers and all. Well, we were game for all of that, too, but just like staying in Mongolia, we'd always thought about Hollywood, but our dream was to have a kickass cool life. So for the past two years, I've been traveling around with these guys to war zones -- from Afghanistan to Burma -- and man, what a life it's been. Now I'm scrambling to finish editing it. Roko ended up getting wrapped up in a different project -- shot in India -- which he's now finishing. But we both work together in the same garage studio at our house. We decided that both of these projects were great, and both needed to be done right now, so we each took one on.

Genghis Blues screens as part of the Texas Documentary Tour on Wednesday, Oct. 15, 7 & 9:45pm, at the Alamo Drafthouse Downtown (409 Colorado). Adrian Belic will conduct a Q&A after the screening. Tickets are $6 for current Austin Film Society members and new members joining before the screening, as well as students; $8 for nonmembers; and are available only through the Alamo Drafthouse Downtown (476-1320) by phone or at the venue one hour prior to screening. For more information, check www.austinfilm.org.