The Tried and the True 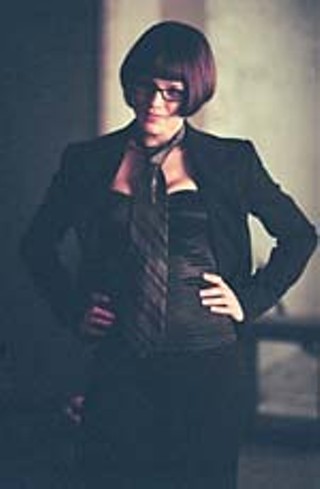 All right, I've cast my verdict. There is no reason to watch TV this fall. After slogging through mounds of preview tape, I can honestly say that the shows I've decided to dedicate couch time to are more than likely old favorites. Alias (ABC) got off to a splendid start last Sunday, as did Angel (WB) on Wednesday, gaining some extra oomph with the addition of Spike (James Marsters) brought over from Buffy the Vampire Slayer. (Yes, Spike returns from the dead and in the most logical way possible.) Another bolt of energy comes from Mercedes McNab as vampire-turned-secretary, Harmony.

The rest of the new sitcoms aren't so much bad as they are ordinary. Married to the Kellys and Hope & Faith make for an hour of ABC's reincarnated TGI Friday block. The likable George Lopez and the hit-or-miss Life With Bonnie anchor the evening, but it's hardly a reason to give up a Friday night and sit home in front of the tube. Two and a Half Men (CBS), Whoopi (NBC), I'm With Her (ABC), and It's All Relative (ABC) have their moments. Of these, I'm most interested in Whoopi, mainly because of the rapport between Whoopi Goldberg and Omid Djalili as her excitable Persian handyman, Nasim. No, Whoopi is nothing like All in the Family, as Goldberg claims as its predecessor in the national press. If it could foreground some of the weightier themes (why do black men date white women?) and sustain them, instead of treating them as incidental chatter to support the tired sitcom antics, the show might some day be memorable.

The new dramas fare better. Joan of Arcadia shows great promise, mainly because its premise of a modern-day Joan of Arc (Amber Tamblyn as Joan Girardi) communicating with God stays away from the preciousness of its forerunners featuring the Big Guy in a major offstage role. Rob Lowe finally gets to be the center of the universe in The Lyon's Den (NBC), a law drama that feels more like The Firm than a traditional TV courtroom drama. Like Lowe's former West Wing gig, Lyon's Den features a large cast, the most fascinating of whom is Frances Fisher (Titanic) as the steely executive assistant Brit Hanley, who delights (at least in the first episode) in wrangling the sniveling lawyer Grant Rashton (Kyle Chandler). It's a treat to see Chandler play a paranoid weasel, a stretch from his former gig as the earnest Gary Hobson in Early Edition. And it's a joy to see Joe Pantoliano put all back together again, playing a good cop in The Handler (CBS). Pantoliano's Joe Renato, like Carla Gugino's title character in Karen Sisco and Kathryn Morris' Lilly Rush in Cold Case, are all appealing, sympathetic characters. If only these procedural dramas weren't so perfectly cut-and-pasted together. There is some hope with Renato, who, we discover early on, has an ex-felon for a brother. But with talent like Pantoliano, Gugino, and Morris, I find myself wishing these actors had something meatier to sink their teeth into.

Of course, there are some late bloomers that may prove promising, all of them on Fox: Skin, A Minute With Stan Hooper, the supernatural thriller Tru Calling, and in November, The Ortegas and Arrested Development.

Austin on the tube

Austin's 25th Annual Spamarama™ festival will be featured on a Food Network weekend special, The SPAM® Cook-Off. In addition to the cook-off, the SPAM® Olympics -- including the always crowd-pleasing SPAM® Toss Competition, the SPAM® eating contest, and the SPAM® call -- are highlighted. The SPAM® Cook-Off airs Oct. 4 at 8pm. Check local listings for encores.

Austin teens Glen Powell Jr. and Christa Scholtz appear in Endurance, the reality competition for kids. Powell and Scholtz are among 20 teens selected from around the country and whisked off to a remote location to test their skill and stamina under rugged (but fun) conditions. Endurance airs as part of the Discovery Kids block, airing on NBC Saturday mornings, 10:30am.™