If it hadn't been such a hack job (and a transparent, two-star rewrite of one of Edwards' numerous commercial peaks), Skin Deep might've done for John Ritter what its blueprint, 10, did for Dudley Moore: transform the TV vet into a viable leading man at the box office. 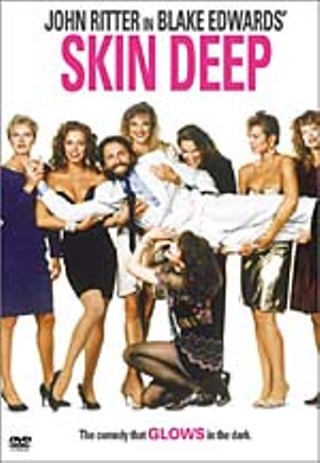 Warner Bros. DVD, $19.99 Flayed alive upon its 1989 theatrical release, Skin Deep remains crass, tacky, and sexist, though if said traits are final determinants, damned be the balance of Blake Edwards' entire oeuvre (Breakfast at Tiffany's, Days of Wine and Roses, The Pink Panther, S.O.B., Victor/Victoria). Let us not in this case, however, throw out John Ritter's baby blues with the bath water. If it hadn't been such a hack job (and a transparent, two-star rewrite of one of Edwards' numerous commercial peaks), Skin Deep might've done for Ritter what its blueprint 10 did for Dudley Moore: transform the TV vet into a viable leading man at the box office. After all, Zach Hutton -- rich, alcoholic, Pulitzer Prize-winning novelist, pianist, and chronic womanizer -- is Jack Tripper a decade removed from his gay-blade days on the SoCal beach with Chrissy and Janet. As such, Ritter has a field day hamming it up in truly Blakian fashion, clowning, wisecracking, and taking pratfalls like Peter Sellers after one too many bottles of Clouseau. Regardless of lazy exposition, gratuitous profanity (and gratuitous Vincent Gardenia), and the fact that boobs are bobbing before the opening credits have finished rolling, Ritter and Edwards are perfectly paired, and the laughs cascade accordingly and continuously. There are some genuinely hilarious gags, like the effects of shock treatment courtesy of a pissed-off ex (Julianne Moore), though the marketing campaign conceit of glow-in-the-dark condoms isn't particularly one of them. Nevertheless, watching Ritter carry a film with such ease is to mourn the fact that no one other than Edwards ever realized the comedian's big-screen potential. Dying just a week short of his 55th birthday, John Ritter is to his cowboy singing father Tex Ritter what filmmaker Jean Renoir was to his father painter Pierre-Auguste Renoir: worthy of the name.