Where the Wild Things Star 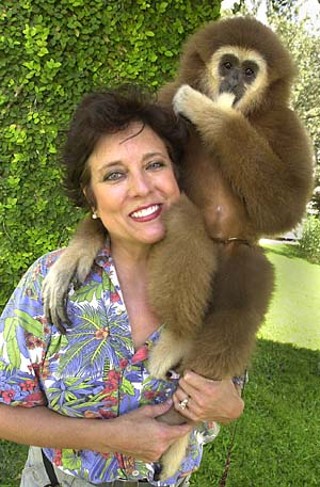 Bobbi Colorado and Lolly the gibbon (Photo By John Anderson)

"They say never work with kids or animals, so we did both with this one." That's director Tim McCanlies, whose new film Secondhand Lions features not only a pair of Academy Award-winning actors in the form of Robert Duvall and Michael Caine, but also a young -- if not "kid" -- actor (Haley Joel Osment) and a veritable menagerie of wildlife from trained dogs to pigs, giraffes, and, most important of all, the lion of the title, which, while perhaps not exactly the proverbial King of the Jungle (a quartet of lionesses courtesy of Los Angeles-based Birds and Animals Unlimited play the part to catty perfection), proved McCanlies isn't one to stint when it comes to truth in advertising.

"We were really lucky that we found the birds and animal folks that we did," says McCanlies. "They brought over, like, 50 dogs for me to audition, and it was really, you know, a riot. I had wanted a really mixed bag of dogs, sort of like a random group of strays of the kind that would show up out in the country like they do. People from town will dump off dogs in the country when they don't want them anymore, and so we got these really interesting dogs that could do different things, and I ended up working that into the movie more than was ever in the script. They were just fun to work with. Tough, too, because whenever there's a scene, maybe a little, quiet scene where the dog's just looking at something off camera, there's always a bunch of trainers off-shot yelling at the top of their lungs and using squeeze toys, food, whatever they use to get the dogs to do what they do. That was sort of a riot, as you can imagine." Cowboy and stunt actor Gil Dean shows how to bring down a horse without arousing the ire of PETA. (Photo By John Anderson)

Like the lion, the film's canine stars came from Los Angeles, but once on set they were trained by local animal wrangler Bobbi Colorado of Bobbi Colorado and the Wild Bunch. Colorado, who stations herself out of Dripping Springs' Sunrise Exotic Ranch, has spent the past three decades working with animals in film and television with husband and business partner Ken Beggs, and specializes in everything from her trained macaws and parrots to her gibbon Lolly, seen briefly in Secondhand Lions' Arabic bazaar scene, and border collie Seamus. It may not be exactly a dog's life, but it's surely within barking distance.

"I grew up in the Bay area of California," says Colorado, "and right after high school I was tour guide at Marine World in San Francisco and from there went on to Los Angeles where I met Ken and worked with a gentleman who did the animal work on Daktari, Gentle Ben, Cowboy in Africa -- all the old animal shows.

"These days, as far as animal trainers and wranglers, there's really not one big supplier anymore like there used to be. It's gotten too expensive to do that, and so these days you'll have people specializing in different animals -- one outfit will get the general contract for a film, and then they'll go out and round up different people they've worked with to get the specific animals necessary for the shoot. In this case, it was horses, and we worked with Gil Dean, who has a ranch out by Bastrop and has worked on films like Gods and Generals, American Outlaws, and Two for Texas. The giraffe work in Secondhand Lions we did as well, but that particular animal came from a park down outside of Corpus Christi." Not Toys 'R' Us but an incredible simulation! (Photo By John Anderson)

Colorado's work on everything from Robert Rodriguez's Spy Kids to the upcoming remake of The Texas Chainsaw Massacre has made her and husband Beggs' business one of the premier go-to outfits for locally lensed film and television productions in need of, say, a chicken who can perch on a pig's head (not exactly a common commodity these days) or a countrified pooch that can hit its mark on command without driving the director to distraction. And the 325 acres that make up the Sunrise Exotic Ranch, owned by Colorado's friend Karen Glass, is a sprawling stretch of pure exotica. Where else can you go 30 minutes outside of Austin and find yourself being soaked by a comedy-inclined chimp named Caleb? (And trust us, being gleeked on by a chimp who only a moment before looked as though he were up for a smooch is an experience you don't soon forget.) It's here that Colorado both puts her animals through their paces, rewarding them with the ever-present pocketful of treats, as well as works to find homes for various animals that would otherwise be abandoned or worse. Currently she's seeking homes for more than 25 real-life secondhand lions.

"Essentially," says Colorado, "we perform here for school groups, church groups, scouts, with tours of the ranch and a bird show, but then we teach the kids about the rainforest. When you get right down to it, it's really all about education for us. We do the movies to make the money to feed the animals, but I'm really into educating kids about the animals as well as doing rescue work and providing a home for these animals who otherwise might have to be put down.

"All told, we have 362 animals here. We've got all the retired Ringling Brothers' chimpanzees, plus lemurs, monkeys, zebras and baby zebras, baby wildebeests, all types of hoof stock, ostriches, emus, and elks. All of this on 325 acres, with three bed and breakfasts so people can come and stay the weekend and see the animals and learn about wildlife in general. And, you know, it's what we've wanted to do all of our lives." 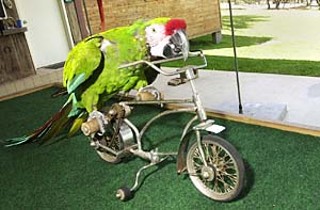 Know why they call 'em Harleys? Because they harley ever start! But seriously folks... (Photo By John Anderson)

McCanlies' film lions weren't the sort of fearsome beasts moviegoers tend to think of when they think of the most regal creature in the jungle -- the part didn't call for that, instead necessitating a big cat who could stretch and drowse as much as be the sleek predator when called upon to do so. Like filmmakers, the cats can be temperamental by nature, and so getting them to plod around a scene without stealing it away from their two-legged coworkers could be difficult.

"Oh, yeah, the lions were interesting to work with," he says, "because I had assumed -- naively as it turned out -- that we would just get some old lion and probably keep her drugged out of her mind half the time, but as it turns out an old lion is a grumpy lion, so that's not good. And it's the females that turn out to be the more aggressive of the species, while the males just sort of lie around all day.

"So we ended up getting some younger females that were more playful and more easily controlled, and then, of course, like all the animals, they worked for food. You had to pay the pig, pay the dogs, pay the lion; it was a constant refrain of getting them to work for food, really. And the lion was really smart in that we'd try to get her to stomp out of the corn field and look a certain way, but once she learned where the food was we'd have to come up with a new trick to get her to do what we needed her to do. They're clever that way."

And how did the actors feel about having to work around animals that could conceivably tear their arms out were they to step on the lion's line?

"No actor ever really got around the lions," says McCanlies, "out of respect to the creatures, but you could tell they sort of wanted to. Me and three people in the crew would have an hourlong meeting to decide exactly what we want to do, but, you know, Bobby and Michael were good with the animals -- they kept wanting to come and hang out with the lions and of course I'd have to tell them, you know, 'Bobby, please, step back, we need you alive.'

"Even more than the lions, though, I think sometimes the actors were a little worried that the dogs were upstaging them on the set. Bobby [Duvall] had really never done a film of this type before, a family film, but he really got in the spirit of it, as did everyone else, especially Haley. Linus, the little white French bulldog that we used, ended up thinking he was the star of the film, and everyone treated him accordingly. We're there with these Oscar-winning actors, and suddenly it's all about Linus the dog, you know?"