Elizabeth Avellán is back as the heart and soul behind Robert Rodriguez’s bouquet of bullets, ‘Once Upon a Time in Mexico’ 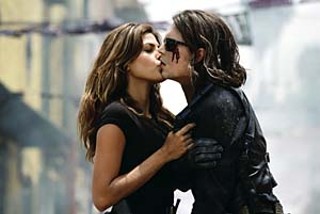 You've never seen a movie like Once Upon a Time in Mexico, not ever. With a title that recalls both Sergio Leone's epic masterpiece Once Upon a Time in the West and Tsui Hark's Once Upon a Time in China, it's less an homage to action films of the past than a completely original, ultraviolent, supersaturated love note to Mexico, from director Robert Rodriguez and his wife and longtime producer Elizabeth Avellán. It's also the final film in the trilogy that Rodriguez began in 1991 with the now legendary El Mariachi and continued with Desperado in 1995, all of which follow the frequently bloody adventures of a wandering guitar-slinger from south of the border as he alternately strums and shoots his way through a cordite-scented wasteland populated by sleazy drug cartels, tequila-soaked wastrels, and buxom Salma Hayek. What's not to love?

With a plot that includes everything from a full-blown revolution, CIA spooks, lost love, and unquenchable vendettas to Johnny Depp sporting a facial disfiguration so hideous it must be seen to be believed, Once Upon a Time in Mexico might well be the most delightfully warped Western ever made.

Shot on the fly with Rodriguez's specially modified 24p Hi-Definition cameras in San Miguel de Allende, the film's frantic pace and searingly creative use of hypervibrant colors make it, if not an instant Oscar contender, then at the very least the season's single must-see film thus far. Austinite Rodriguez, of course, has been a maverick from the get-go, but it's producer Avellán who often seems the cogent heart and soul behind her husband's outrageously entertaining productions. Mother to the couple's three children and producer of all eight of her husband's films, she's the one juggling the metaphorical half-dozen chainsaws while her overgrown kid of a husband repeatedly makes Hollywood fun again. It's a tough job, but somebody's gotta do it, and Avellán does it like no other.

We spoke to her about the Once Upon a Time in Mexico shoot, Latin American politics, and the joy of high body counts.

Austin Chronicle: I think this may be the most violent love story ever made. It's got its comic touches, too, and it's gorgeous to look at, but did you have trouble with the MPAA and securing an R rating? It's really over the top in a lot of respects.

Elizabeth Avellán: It's got a wild body count, yeah, but you know what? They never came back to us with anything -- it passed with flying colors. They're used to Robert's style, and I think it's so tongue-in-cheek, also. And then there's the war aspect of the movie -- the coup is like a war -- and that really took the body count way up there. But as to getting an R? No problems.

AC: It's a sprawling story, much more so than the previous two films in the series. How long was the shoot?

EA: Seven weeks. That's it. We prepped the thing in like two weeks! It's a blur. I have no idea how we even did it. Total blur. I'm kicking myself every day that we didn't do a Full Tilt Boogie set documentary like we did on From Dusk Till Dawn. People were totally away from their homes, on location, and the town where we stayed, San Miguel de Allende, is just this very beautiful, extremely safe town that's like this little jewel box. [Screenwriter] Bill Wittliff has a house down there. It's just a wonderful place, very 17th and 18th century, as you can see in the film. There was very little production design in the film because the town was already perfect. We'd be like, "OK, maybe hang some crepe over there, and let it go." That was it. But even though the shoot was exhausting and we were all really tired by the time it was over, everyone, from the stunt coordinator on down, wants to go back. It was just so much fun. When you go on location down there, you literally do need to drink tequila every night to make sure you don't get stomach problems, and, you know, that kind of opens the door for a lot of things. It was really a lot like living in this wonderful dorm or a summer camp, where everybody was friends and hanging out after work and enjoying these terrific meals and wine and all that. I'm not making it sound like a film shoot, but really, we had a lot of fun in that town.

AC: This is one of the most colorful films I've ever seen, in terms of the vivid, almost Day-Glo palette that Robert used. It's certainly a far cry from the somewhat muted colors of El Mariachi and Desperado.

EA: Robert wanted to show Mexico the way he sees Mexico, which is very bold, and the only way to do that was with the Hi-Definition cameras. Once he got those cameras he could finally capture what he was really seeing. Those colors, that brightness, that's the way it is down there, and with Desperado he just couldn't capture that because of the limitations of the film stock. El Mariachi's washed out for that reason, too. He wanted the look of the film to reflect what he thinks of Mexico, and of that town in particular.

AC: There's also a very strong sort of Mexican nationalist slant in the film, much more so than in anything the two of you have ever done before. It's almost as though the film were a love note to Mexico, albeit one with a bouquet of bullets in lieu of flowers.

EA: It's such an interesting country. People think the plot of the film is complicated, but I'll tell you, I'm from Latin America, from Venezuela, and this is exactly what's going on down there right now. The problem is that our president actually was the military guy; the cartels, you know, are there to feed him and keep him in power, and that's why Chavez is still in power. He steals all the money, he pays people off, and that's how he maintains his grip on the country, and of course Robert knows that whole story, and so that's how the revolution backstory ended up in the script. Robert and I, when we see these marches in Venezuela, a million people out of a city of 5 million, that really touches us. This story hasn't been told on regular television, though, at least not here in America. The people is what is so valuable in these countries, it's what makes these countries, and I think that's what Robert wanted to embody in the film, this sense of the masses that make up the heart and soul of the country. Yes, you have all this craziness with the CIA and the FBI tearing up the place, stirring up the pot in these places, and the poor president getting stabbed in the back by his own men. That's exactly the way it is down there. But it's the people that make these countries so beautiful. It's almost like a mythological view the world has of these places. Americans and the world are fascinated by these countries that are caught up in revolutions and ruled by these corrupt despots. How do they survive? It's the goodwill and the heart and the spirit of those people. And that's kind of what the movie is about.

AC: Johnny Depp's character of the CIA spook really deserves a film of his own. Any chance of seeing him again sometime?

EA: It's a trilogy, but I know that everybody wants to see more of that character. I don't think Robert's open to that, but yes, it is an incredibly interesting character. And Johnny just gave so much to it. It's like we're creating another crazy mythological hero, and Robert had that in his mind from the beginning. I remember seeing the drawings he did of the character in the beginning. Most of his storyboards for these movies are not fully fleshed-out images. But that character he drew in detail from the beginning.

AC: When did Robert write the script?

EA: He wrote it in about 10 days, about four weeks before we started shooting.

AC: Was most of what ended up on the screen in his original script?

EA: There weren't many changes. Obviously when you have a script like that, that you're literally shooting at that moment, he had so much in his mind, images that he wanted to make happen but that weren't fleshed out in writing. The crew that works with him knows that by now; they know what to expect, and so both the crew and the actors were very open to whatever, you know? It had a real element of, you know, we're making an HD movie, and we're free to try things as they come up, we're free to experiment and just go nuts with it. Which is exactly what happened. The dialogue was pretty much there, but Robert still let the actors do their thing. Johnny grabbed what Robert did and then added some stuff of his own, and it ended up being this amazing combination of the two. Johnny got that character so clearly, though; he just nailed it; he knew who that guy was, all the way. And you know what? He was literally there for only 10 days. That was it.

AC: I take it Robert edited on set as usual?

EA: Oh yeah, he had all of Johnny's scenes edited by the time Johnny was leaving. He'd get home every night and then edit until 1 or 2 in the morning.

AC: And then get up in the morning with hardly any sleep and do it all over again. He's relentless. You married a force of nature.

EA: Robert doesn't need a ton of sleep. On the weekends he'd catch up with that. But during the week he'd just go on and on and on. Nothing is halfass with him. Not being married, not being a father, not being a filmmaker -- he is a man committed to whatever he has in his life. It's really inspiring, because, you know, I'm not really like that. That's all Robert, all the time.

Once Upon a Time in Mexico opens in Austin on Friday, Sept. 12. For a review and showtimes, check Film listings. 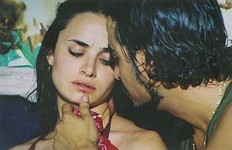 The Birthday Party
They can make movies, but can they cut a cake?