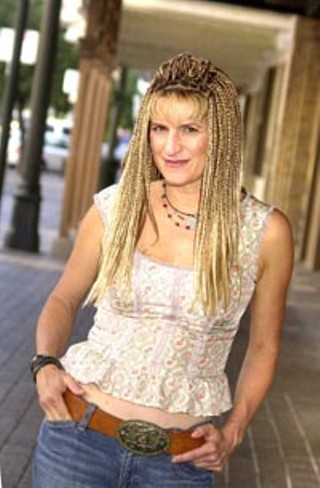 The term "cinematherapy" calls to mind soapy movie-of-the-weeks endlessly rerunning on a women's channel, but that stigma just might be changing with Thirteen. Critics and therapists are calling Catherine Hardwicke's directorial debut cinematherapy, too, though Thirteen is more like shock treatment than a couple of hours on a cushy couch. A bracing look at preteens' scary initiation into the very adult rites of sex and drugs, Thirteen is no picnic to watch -- but that's really rather the point: the unglamorization of activities relentlessly, ruthlessly glamorized by the media.

Hardwicke, a UT graduate, co-wrote the script with her longtime friend, the then-13-year-old Nikki Reed, basing the script on Reed's own experiences. (Teen actress Evan Rachel Wood plays the character inspired by Reed, and Holly Hunter portrays her bewildered mother.) Their film dramatizes how easily a teen's typical curiosities and rebellions can spiral into something much more troubling. Shortly before Hardwicke's trip to Austin to screen Thirteen at the Paramount, the first-time filmmaker spoke with the Chronicle by telephone about the cult of consumerism, dirty old men in Congress, and why our schools can't do anything to help.

Austin Chronicle: You co-wrote the script for Thirteen with Nikki Reed, who also has her acting debut in the film. Nikki's own experiences inspired the project, yes?

Catherine Hardwicke: [In the film] Nikki doesn't play the character that's loosely based on herself, she plays the "bad" girl. Nikki was the straight-A student, loving with her mom, and then suddenly, you hit junior high, and it gets a little out of hand.

I've known her since she was 5 years old. She was such a cute little crazy wonderful creative kid, and then I saw her hitting 12, 13, and she's suddenly turned into this gorgeous supermodel. She looked like an 18-year-old when she was 12. And all this stuff that comes along with that is pretty confusing, pretty crazy.

AC: How did you react when Nikki started sharing some of her experiences with you?

CH: I was definitely shocked ... and sad. I wanted her to have other things in her life than the hair, the make-up, the anger, the cliques. I just wanted her to get excited about something else -- about writing or painting or books, anything. I saw her obsessed with make-up and the beauty myth that we basically cram down everybody's throat every day. Before seventh grade, she'd wake up before 4:30 every morning, and she and her good friend would do 21é2 hours of hair and make-up. Nikki even got paid to do people's make-up for weddings, she was so good at it. I personally was pretty surprised by that since I've barely spent two minutes on make-up myself my whole life [laughs]; I don't even know what the things are. So I was kind of shocked -- but then I thought, how hypocritical of me to be shocked. Because if you walk into any store, you will see 50 magazines that are devoted page after page to telling us how to do the lip liner, how to do the lip gloss, how to do the foundation, how to look natural, how to look fresh, how to look cute at night. And we are preaching this to kids. And then I'm surprised that somebody actually does what society is telling her to do? How could I be so surprised?

AC: The same goes for clothes. Out of all the devastating moments in the film, the one that really got me was when Evan Rachel Wood's character flaunts her thong in front of her mother --

CH: Yeah, that act of defiance. That's a whole other thing: Growing up, you have to separate yourself from your mother at some point; you have to become your own person. But the thing that's so hard is, we have a supersexualization of teenage stars who are on every magazine, and they look really, really sexy. Yet people act shocked when kids seem to be interested [in sex] or dress sexy [as a way of demonstrating their independence]. How can we be shocked that kids are thinking about sex -- there's no way they couldn't be with the way we reinforce it. Three thousand advertising messages hit each person every day, on a minimum.

CH: Minimum. Just in the course of a normal day. We live in an environment where we're just bombarded from an early age: You're born into Baby Gap, you're living these fully branded lives.

AC: When do you think that shift happened, when society became so obsessed with image -- and specifically, sexual image -- an obsession that inevitably has trickled down to adolescents and preadolescents?

AC: It seems like in the past couple of decades, the pendulum has swung almost too dramatically from no talk about sex to nothing but talk of sex.

CH: You could look at it one way -- things are out in the open, it's not so repressed. But it's got to be so confusing if you're a 12-year-old kid.

AC: Have you had any unintended reactions from younger viewers who see the film not as a cautionary tale but instead walk away thinking, "I wanna have my tongue pierced, too; I wanna experiment with drugs, too ..."?

CH: The only kids that have seen the movie where I've been around came with their parents or a guardian or a school counselor -- so maybe [if they felt that way], they wouldn't have said that in front of [an adult]. But I do think that kids are pretty smart, and they can recognize where someone took a wrong turn and where they did something dumb. ... Every kid has to figure out for themselves what's right and what's wrong. You can't really have somebody wagging a finger and tell you.

AC: One of the great things Thirteen seems to be accomplishing is the encouraging of a dialogue between parents and teens.

CH: Therapists that have seen the movie said that it could be used as a "cinematherapy" concept, or as a neutral ground to [get a dialogue going]. I don't think every 13-year-old is ready to see this movie, because it is filmed in a dramatic style -- it may be too much for some people. The acting is so good that it's almost too real.

AC: What audience were you targeting the film at? Because it seems like the audience most in need of seeing it -- teenage girls -- is excluded because the MPAA gave it an R rating.

CH: I wasn't making the movie from a marketing point of view. I was trying to make a story that was a compelling story that might mean something to other people. The thing about our ratings system, if you say the F word twice, it's rated R. And if you have an underage kid take a sip of beer, it's going to be rated R. This movie was about kids going through a troubled time. I mean, you can kill as many people as you want in a PG-13 movie; that's no problem. But you can't take a sip of beer. The rating system is ... peculiar? It's a little questionable. But I think maybe [in this case] that's good -- you're not supposed to go by yourself as a kid to this movie. Get a parent, get a big sister to take you.

AC: What else do you hope to accomplish with the film?

CH: What I hope is that [audiences] will take a look at schools and think, it doesn't seem like the school was reaching out to these kids very much. What can we do? Why don't we have more arts programs in schools; why are we slashing that budget? Kids need a creative-writing teacher who inspires them to get their anxieties and their problems down on paper. They need a drama class to work some of these issues out. They need a drawing class. They need stuff to get you charged in a good way. In California, they just slashed the arts budget from 18 million to one million for the whole state. We already had almost nothing in the schools. So what can you do? You, I, we can all become a big brother/big sister; we can all go volunteer in the schools. Whatever anyone has to offer, they can try and help out.

CH: Well, they can't help it. They have no funding. And the poor teachers ... Nikki had a class with 40 students in it, 16 of them sitting on the floor. How can you keep control of these kids when some of them don't even have desks? [Every teen needs] some kind of a mentor -- a neighbor or a cousin. 'Cause sometimes you just don't want to do it with your mom -- 'cause she's your mom. We had this hilarious panel at the writers' guild in L.A., and the president of the writers' guild, Victoria Ruskin, said she thinks it should be mandatory that when kids turn 13, they automatically have to shift to [somebody else]'s parents because, anybody's parent is better than yours, anybody's parent is smarter than yours. [Laughs] I think that was kind of a good point.

Thirteen opens in Austin on Friday, Aug. 29. For a review and showtimes, see Film listings.