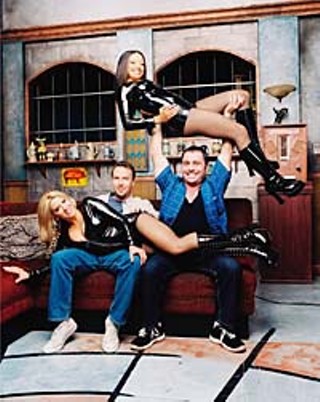 Call this edition of "TV Eye" a "clip special" of all the TV news you need to know. Well, not all, but a good chunk of it. I promise not to crack lame jokes like that guy on America's Funniest Videos.

New Boys at 'The Man Show'

Austin-based Sacred Cow Productions artists Joe Rogan and Doug Stanhope take the reins of The Man Show when it returns for its fifth season on Comedy Central this Sunday. This means "The Man Show now has an obstinate, alcoholic swinger and a cocky martial arts grand champion at the helm," wrote Sacred Cow representative Travis Marriott in an e-mail informing me of the change many months ago. "How much of that sharp political and social editorializing for which Sacred Cow artists are known will make it into the new season remains to be seen, but one thing is for sure. The new Man Show will have all the boobs and beer and twice the balls."

One can only hope. The whiney Adam Carolla and the talentless Jimmy Kimmel were two of the most unlikable TV hosts on a show that barely holds my attention to begin with. Rogan and Stanhope can only make it better. Of course, I'm not the demographic they're gunning for.

According to Comedy Central press info, the first episode features Stanhope visiting a "masseuse" and the introduction of a new recurring character, "the magical black guy," who counsels Stanhope in song to "Follow Your Penis' Heart." Studio audience members will be invited to play the new game, "Guess Whose Ass Crack?" It all comes to a merry end with the show's signature bit, "Girls on Trampolines."

Keeping Time, a series on the torch bearers of U.S. roots music, continues on the Sundance Channel, Thursday nights at 6:30pm. The Aug. 21 episode, "Buy This Record" examines the crucial role of independent record labels including Fat Possum from Oxford, Miss., Chicago's Bloodshot Records, Alligator Records (from which the incredible Shemekia Copeland sprang), and the young Memphis label Madjack. The final episode, "Art of Song," explores songwriting from inspiration to presentation, featuring neotraditionalists like the Trachtenburg Family Slideshow Players, among others.

Newlyweds: Nick and Jessica, a new reality show following the first year in the marital life of Nick Lachey and Jessica Simpson premieres on MTV, Aug. 19, at 9:30pm. The series picks up after the couple's October 2002 Austin wedding. Questions as to whether Simpson is really as bubble-headed as she seems are answered when she wonders aloud why the canned meat in the Chicken of the Sea can tastes like tuna.

What happens when three fundamentalist Christian families discover one of their children is gay is the subject of Arthur Dong's documentary, Family Fundamentals, airing Aug. 26, 9pm, on KLRU. The documentary is part of the always-worth-watching POV series.

Signing Off With Style

Austin television pioneer Mel Pennington passed away unexpectedly last week. I had the pleasure of interviewing Pennington for the Chronicle's first "Lost Austin" issue in 2001 (see Part of Our Day: Local Personalities From the Golden Age of Television, Jan. 26, 2001). My interview with the whip-smart funny and extraordinarily patient Pennington goes down as one I'll never forget. Unsurprisingly, he told me that he wasn't thrilled with the direction television had taken. What did surprise me was his enthusiasm for what the medium, although maddening and often perplexing, was capable of. Pennington's ideal of television made me look at it with a renewed fascination.

"It was an experience I'll treasure the rest of my life," Pennington said of his television career in 2001. I feel the same way about our conversation, Mr. Pennington, wherever you are.