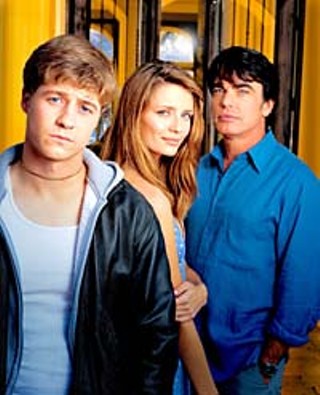 The fall TV season is near, meaning forecasts of who will be the next big thing are appearing all over entertainment media (remember all the buzz about Jessica Alba?). High on the radar this time is former Calvin Klein underwear model Travis Fimmel. He stars in the WB's Tarzan, a modern spin on the Edgar Rice Burroughs tale, set in the wilds of New York. (It's OK -- you can laugh.) Really, how long is that "I'm too sexy for my drawers" look going to carry a series?

No, the "one to watch" is Benjamin McKenzie, the star of the new Fox series The O.C. (short for Orange County). And I'm not just saying that because he's a local boy (he graduated from Austin High in 1996 as Benjamin McKenzie Schenkkan). I'm saying this because from what I've seen, he turns in a strong performance that is much more interesting than whatever is lurking in Fimmel's man panties.

Comparisons to early Fox hits like Melrose Place and Beverly Hills 90210 are misleading. The O.C. is better. The prime-time soap elements are there, but the sheen is decidedly less lustrous than its predecessors. McKenzie stars as Ryan Atwood, a troubled kid with a sensitive streak, taken in by idealistic public defender Sandy Cohen (Peter Gallagher). Thrust into the bling-bling world of overindulged, undersupervised young adults and their powerful parents, Ryan soon learns that life can be just as dangerous among the beautiful people of O.C. as it is in the mean streets of Chino.

"Ryan's the eyes and ears of the audience," McKenzie said in a phone interview from Los Angeles. "He takes it all in and is fascinated at how absurd that world is."

While McKenzie is chatty and amusing in person, Ryan is reticent and guarded, meaning much of McKenzie's performance in The O.C. pilot depends on reaction shots.

"In the beginning I was intimidated because of my lack of on-camera work," McKenzie admitted. "On my first day, I met Doug Liman, the director of some of my favorite movies [Swingers, The Bourne Identity] who was directing the pilot, and I had scenes with Peter Gallagher [American Beauty]."

"But they were great. As long as you brought your game to the table and were focused and ready to work, they respected that."

The O.C. is McKenzie's proverbial big break. He has a degree in foreign affairs and economics from the University of Virginia and even worked as an intern in U.S. House Rep. Lloyd Doggett's office. But acting was his true calling. He moved to New York, then to Los Angeles, waited tables, went to auditions, and hoped diligence would pay off. A year and six days after he arrived in Los Angeles, he was cast in The O.C. Although he knew a TV gig was a good opportunity, he considered passing on the job but sought the advice of his uncle first. Fortunately, his uncle is screenwriter Robert Schenkkan (The Quiet American) and the Pulitzer Prize-winning playwright of The Kentucky Cycle.

"[My uncle] said, 'Are you crazy? It's television, but this is really well written. Shut up and take the job.' I'm lucky to have someone I trust, who knows the business, who can help me sort it all out."

In addition to McKenzie and Gallagher, The O.C. also stars Kelly Rowan (Three to Tango) as Kirsten Cohen; Adam Brody (Growing Up Brady) as the Cohen's heartbreakingly geeky son, Seth; Mischa Barton (Once and Again) as Marissa, the beautiful girl next door; and Tate Donovan (Murder at 1600) as Marissa's father, Jimmy.