Blogging With the 'Chron'

They say imitation is the highest form of flattery, but this is a parody. Of XL ent. And their shiny new useless blogs. 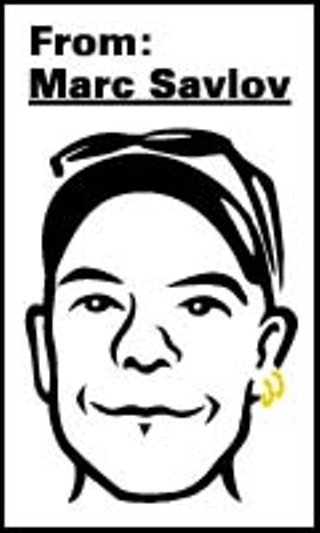 7/25, 11:34am: Woke up. Wrote. Q: Will Manchester United's sale of David Beckham to Real Madrid impact late-run box office of Bend It Like Beckham? (Dóblelo Aprecia Beckham has a certain ring to it!) Also, why never any great soccer-announcer films, i.e., Univision's Andres "Goooaaal!" Cantor in Shout It Like Cantor?

7/27, 10:24am: Woke up. The dog got into the coffee overnight and wrote a review of Seabiscuit while I slept. Ha! -- There's no "k" in "chiaroscuro," sucker. Checked out Garcia's XL ent blog online. He says his eyes hurt from dim projector bulbs. Plot to incapacitate rival reviewers coming along nicely. [Note: Send "thank you" champagne to Mr. Cameron's office for tip.]

7/27, 12:58pm: Woke up. Wrote. Drank rest of coffee left over from last night. Crunchy. Why does Sylvester Stallone hate me? His paintings are so cool. Wish I were more like him. [Note: Develop upper body strength; get agent.]

7/29, 9am: Still asleep. Had the strangest dream last night: I was trapped in The Seventh Seal but playing Pictionary, not chess. [Note: Learn chess.] Article on lack of decent vegetarian films coming along, still no title though. (How to Veal? Yes!) Also, Tim at Alamo called -- says my idea for a Clint and Moe Howard minifest "asinine." This from a guy who drives a Cooper. Bah!

7/30, 10:13am: Woke up. No coffee, just creamer. Got a catty e-mail from a reader who disagreed with my assessment of Reptilicus' timeless magic. As if. [Note: Will dreadlocks make me more insightful? Call Elvis Mitchell.] Went for jog on Town Lake and ran into Owen Wilson, literally. Broke his nose. Looks better now!

7/31, 5:29pm: Ran into Billy Bob Thornton at Kenichi last night but mistook him for Steven Van Zandt (everybody looks the same with bandanna and toro). Asked him if he ever got around to playing Sun City, and he just stared. Chagrined, I told him I thought Sling Blade was much better than Blade 2. Threw unagi at me, chased me down Sixth Street.

[Ed. note: They say imitation is the highest form of flattery, but this is a parody. Of XL ent. And their shiny new blogs, which you can find at www.austin360.com/calendar/content/events/xlblogs/xl_blogs.html.]