Susan Spitzer (l), co-owner of the Marble with her husband Gene (Photo By John Anderson)

At approximately 10pm on July 19, Marble Falls finally lost its Marble. Sixty years after opening, the Marble Theatre -- a one-screen icon of picture-perfect Main Street -- showed the obvious last picture, closed its doors, and called it quits. They say even Peter Bogdanovich cried as he filmed the end of The Last Picture Show. But at this screening, the tears welled not for the fictionalized demise of small-town life, but for its real-life counterpart. They fell for the loss of a place where patrons had been coming since the 1940s. They fell for the closing of a venue where resident Amy Ribera had her first kiss (it was during Biloxi Blues). They fell in response to, as Ed Mampel put it, "a sentimental landmark closing down."

Most of all, though, the tears fell for Susan Spitzer, co-owner of the Marble with her husband Gene for the past 21 years. Like a preacher bidding Godspeed to her congregation, Susan hugged a hundred or so seasoned loyalists as they reluctantly left the theatre for the last time and, with her brow furrowed, told them, "I can't say 'come back' anymore."

You've probably already figured out why the Marble closed, and yes, the most obvious reason is about as exciting as the nuts-and-bolts aisle at Wal-Mart or perhaps a lecture in economies of scale. "We always knew that a multi would drive us out of business," Susan said. That's multi as in "multiplex" or, more specifically, the Driftwood Theatre 8, which opened in Marble Falls last June. This harsh lesson in the Hobbesian ways of the world hasn't been lost on the locals. "I'm scared to death that Barnes & Noble will open up," said Chuck Woods, owner of the Bookshop, an independent bookstore located a few storefronts down from the Marble.

The huge stores, he explained, are "the black bat of economics, and you can't compete with that." Waiting in a line that stretched around the corner to buy commemorative Marble T-shirts for her grandchildren, Peggy Mobley lamented what the Driftwood has done to her beloved theatre, noting with resignation that "the big guys chase the little guys out sometimes."

Lindsey Nelius, a waitress at the Wild Horse Grille, also on Main Street, understands the economic rationale behind the Driftwood's debut. Nevertheless, she explained, "Everything is getting big here. It's depressing. All the megastores, chains: It's not for me." Much of the Wild Horse staff nodded in agreement, making it clear that she's not alone.

But neither, of course, is she unopposed. Jeff Benson, president of the Great Texas Movie Co. and owner of the Driftwood, thinks big. His original business plan for the Driftwood Theatre 8 reads like a stellar business-school project: It's a frugal, ambitious, strange, and ruthless document. Frugal in that Benson bottom fed, buying the theatre's sound equipment from a closed theatre in Houston for a mere $38,000 and nabbing the 4.8-acre site with a 36,300-square-foot building already on it for a cool $1.43 million.

Ambitious in that he projected gross ticket sales to range from $1.82 million to $2 million annually, based in part on an estimated 21.6% population growth between 2000 and 2005 (a dubious prediction in a struggling economy).

Strange in that it took 16 months to obtain financing for a $2.9 million loan, which he finally obtained through Comerica Bank of Houston, which only approved the loan after the U.S. Department of Agriculture secured it. (If you're wondering what the USDA is doing in the movie business, well ... me, too.)

And ruthless in that Benson hasn't much of a soft spot for a pre-existing one-screen theatre run by owners who insist that it's their job not just to show good films but "to civilize the next generation." The good people of Marble Falls, Benson explains, "deserve and want better than their single-screen theatre their town currently has." As for Susan Spitzer, he says, "She's doing all this 'David and Goliath' stuff, but had she gone out five years ago and built a three-plex, nobody [as in another theatre] else would have come to town." Benson, unlike Spitzer, is a man driven by the bottom line, a man who doesn't understand that running a multiplex keeps you from requiring kids to bring permission notes from mom to see a certain movie.

In all fairness to Benson, he's probably on to something. The Driftwood's a swank place to catch a flick. With its art-deco design, high-backed lounge seats, liftable cupholder armrests, coffee bar, ice-cream parlor, and Dolby Surround Sound, it appeals to Marble Falls residents who are too young to indulge in something as square as nostalgia. Indeed, according to Benson, when 2 Fast 2 Furious opened at the Marble in June, it grossed only $3,000 in a week. By contrast, when the Driftwood got hold of it after it had already been out for two weeks, it grossed $3,500 in a single weekend. So, while Susan sees the Driftwood as "emblematic of a more notable trend toward alienation in American life," many of the kids around her simply see it as a freakin' cool place to hang out and see flicks in stadium seating.

Brad Williams, for example, said, "The new theatre is great because you get a bigger variety." Shera Persyn, who works at another Main Street shop called the Lemon Tree, agreed, praising the Driftwood as "real clean and nice and updated." Even Chuck Woods, the bookstore owner, had to concede, "People here are excited about the Driftwood."

But certainly not the older folks who stood around him, waiting to get in to The Last Picture Show, listening to the Hill Country Community Band play "Yesterday" in front of the theatre, and reminiscing about the Marble's charms. When the band took a break, Anne Daly looked up at the concession stand (buttered popcorn, $1.50; a coke, $1; hot dogs, $1.50) and declared, "I am just sick about this." Another woman exclaimed, "Shoot, I'm gonna start crying." Mary Meyer, who first visited the theatre in the mid-1940s, pointed to a string of lights that hadn't been moved since WWII and said that she'll miss the chance to keep bringing her grandkids to the Marble. Wib Stanford, an 86-year-old gentleman who clapped and swayed to "Eleanor Rigby," said that the Marble had been his "Saturday night entertainment" since 1961. Sherrye McAnelly voiced her intention never, ever to patronize the Driftwood. ("I'm not gonna cheat!") In fact, the only person north of 60 who seemed less than effusive about the Marble was a man who stormed out of The Last Picture Show during the scene in which Sonny squeezes his girlfriend's boob in his pickup truck. "This is pornographic!" he complained to Susan out in the lobby.

Prudence notwithstanding, the older residents of Marble Falls once gave the Spitzers hope that they could legitimately compete with the Driftwood. After all, here was a cohort of gray-haired loyalists whose relationship with the Marble went back a generation or two. With people living longer and longer through better chemistry, well, maybe the Marble could hold on, cultivate its niche, and survive. The idea might have been "David and Goliath stuff," but it seemed worth the risk.

Sure, the Driftwood is fancy. Nevertheless, with its expansive parking lots, 200-plus-person theatres, $7.50 tickets (the Marble charges $4), and large, impersonal staff, it's also a potentially intimidating place for an older person to catch a movie. Wib Stanford, the 86-year-old, thinks so. "I'm not wild about the format over there," he explained, nodding in the direction of the Driftwood.

Based on the popularity of this opinion, the Spitzers, however quixotically, planned to dig in their heels and weather the Driftwood storm. And it was then that their world crumbled. As the Driftwood's grand opening approached, they were blindsided by the cold logic of profit maximization: The major film companies stopped sending them blockbuster films. It began with Paramount Pictures, with whom the Spitzers had done business for 21 years, and then the others -- Sony, Time Warner, Fox -- soon followed. Baffled, Susan sought an explanation, but the distributors snowballed and backpedaled and stopped returning angry phone calls, leading her to conclude, as she wrote to a Time Warner representative, that "the whole business is so unsavory, so disagreeable -- not to mention futile -- that I don't have the heart for it." She explained, "I want people to know what's what. ... People always say, 'Please don't close.' I want them to know that the choice isn't mine."

Jeff Benson couldn't agree more. "It's their movies," he says, referring to the producers. "They can do what they want with it, and they're going to maximize their return on investment like any other businessman would." As he tidied up the ticket booth, Gene Spitzer saw the matter from another perspective: "You know, you can't have a movie theatre without movies."

In other words, at least David had a stone to sling at Goliath.

Bob Miller, the Spitzers' former distributor at Paramount in Dallas, declined to comment on his refusal to provide prints to the Marble. Nancy Kirkpatrick, a Paramount spokesperson in Los Angeles who, according to Miller, "handles these kind of things," failed to return repeated phone calls.

But Houston King, an independent producer and producer's rep based in Los Angeles, explained in some detail the reason for the Marble's predicament. "The big firms need to make the big money in one weekend," he said, "and their returns come through box-office sales." As a result, "they don't have the inclination to work with a small theatre. It's not worth their time." When a theatre charges only four bucks a head and makes less in a week than a screen down the road makes in a weekend, film producers are loath to waste the cost of an additional print and its accompanying promotional materials. So, as the Spitzers have learned, they just cut the small guys out, leaving them to have a last picture show and worry about the future -- their own and that of a town that once felt small.

If you're thinking that the Marble should have become an art house, they've tried. Film producers were happy to dust off a film like Breakfast at Tiffany's and send it to Susan. But Marble Falls, with its population of 5,000 or so, isn't Austin, a point made crystal clear to the Spitzers when about five people a night showed up to check out Capote's classic. They've tried. Tried. And tried. And now they're tired.

"A lot of you have asked what we're going to do," Susan told the audience before the show started. "And the truth is we have no idea. If any of you want to hire us ... " Nervous laughter ensued, and when it died down, Susan continued. "We're in the phone book." 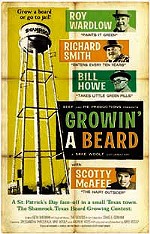 What's in a Face?
A lot, Mike Woolf discovered while making his short doc 'Growin' a Beard' -- and especially If the face Has got whiskers on the chin and Jowls